High blood pressure and other known risk factors for stroke also increase the risk of developing cognitive problems, even among people who have never had a stroke, a study funded by the National Institutes of Health has found.

High blood pressure and other known risk factors for stroke also increase the risk of developing cognitive problems, even among people who have never had a stroke, a study funded by the National Institutes of Health has found.

"Our results emphasize the importance of early intervention to treat high blood pressure and preserve cognitive health prior to a stroke or other cerebral event," said first author Frederick Unverzagt, Ph.D., a professor of psychiatry at Indiana University School of Medicine in Indianapolis. The study appears in the Nov. 8, 2011 issue of Neurology.

The new findings come from the REasons for Geographic and Racial Differences in Stroke (REGARDS) study, an effort to track stroke risk and cognitive health in an ethnically and demographically diverse sample of the U.S. population 45 and older. Since 2003, the study has followed more than 30,000 people. The study is funded by NIH's National Institute of Neurological Disorders and Stroke (NINDS) and is led by George Howard, Ph.D., chair of the biostatistics department at the University of Alabama at Birmingham.

Strokes, which affect some 795,000 Americans each year, occur when blood vessels that supply the brain rupture or become blocked. A stroke can cause a host of cognitive disabilities, including effects on memory, speech and language, and everyday problem solving. But even without suffering a stroke, individuals at risk for stroke may experience cognitive problems as their blood vessels deteriorate.

For this analysis, the REGARDS team collected data on nearly 24,000 study participants who had no history of cognitive impairment or stroke, and no evidence of stroke during the study. At the start, the researchers assessed each person's stroke risk with the Framingham Stroke Risk Profile, which incorporates risk factors including age, high blood pressure, diabetes and heart problems. They also assessed cognitive health with a six-item screening test that required participants to give the year, month and day, and to remember three items from a list after a short delay. The test was repeated annually, and the average follow-up time was 4.1 years.

"A strength of this study is that it looked at people who were cognitively healthy at the start and reassessed their cognitive function periodically to see who developed problems over time," said NINDS Deputy Director Walter Koroshetz, M.D. "This allowed the investigators to explore whether certain risk factors were predictive of, rather than just correlated with, cognitive impairment."

Over the course of the study, 1,907 people without an evident stroke showed cognitive impairment, which was significantly associated with their baseline Framingham score. In this group, age and left ventricular hypertrophy (LVH), an enlargement of the heart, were the only score components that independently predicted cognitive decline. Similar to the risk of stroke, each 10-year increment in age doubled the risk of cognitive impairment. LVH, when adjusted for other factors, increased the risk by about 30 percent.

The people who experienced cognitive decline may have had silent strokes or other subclinical changes affecting the brain's blood supply, Dr. Unverzagt said. The study does not rule out other possible causes, such as Alzheimer's disease, but Dr. Unverzagt notes there is growing recognition of an overlap between the pathology of stroke and Alzheimer's. The two conditions share several risk factors — including high blood pressure.

NINDS is the nation's leading funder of research on the brain and nervous system. The NINDS mission is to reduce the burden of neurological disease — a burden borne by every age group, by every segment of society, by people all over the world. 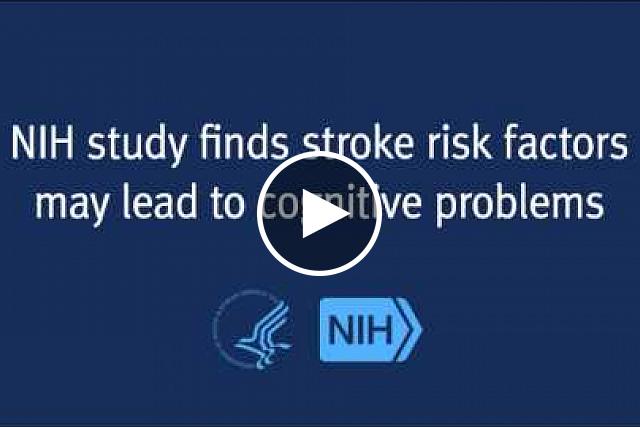 High blood pressure and other known risk factors for stroke also increase the risk of developing cognitive problems, even among people who have never had a stroke.