Worldwide, approximately 500,000 new cases of cervical cancer are diagnosed every year, and about 250,000 women die from the disease. An overwhelming majority of these new cases and deaths occur in low-resource countries. Virtually all cases of cervical cancer are caused by persistent infection with HPV. Cervarix is one of two vaccines approved by the U.S. Food and Drug Administration to protect against persistent infection with two carcinogenic HPV types, 16 and 18, which together account for 70 percent of all cervical cancer cases. The vaccine is intended to be administered in three doses given over the course of six months. To date, investigators have observed up to eight years of protection from persistent HPV infection with the vaccine. Studies are ongoing to determine the maximum length of protection.

The cost of the vaccine as well as the logistical difficulties of administering three doses to an adolescent population in resource-poor countries is greater than administering two doses. Even in wealthier countries such as the United States, few adolescent females complete the entire course of three vaccinations. According the Centers for Disease Control and Prevention, although approximately 49 percent of American girls ages 13 to 17 received one dose of the vaccine in 2010, only 32 percent received all three doses. In the United States, the predominately used HPV vaccine is Gardasil, which has a different formulation than Cervarix. Gardasil also protects against up to 90 percent of genital warts because it targets HPV strains 6 and 11 as well as 16 and 18.

The NCI-sponsored Costa Rica Vaccine Trial was designed to assess the efficacy of Cervarix in a community-based setting. Women ages 18 to 25 years were randomly assigned to receive the HPV vaccine or a Hepatitis A vaccine as the control treatment. Although the investigators intended to administer all three doses of the assigned vaccine to all 7,466 women in the study, about 20 percent of the participants received only one or two doses of the HPV or control vaccine. A third of women did not complete the vaccine series because they became pregnant or were found to have possible cervical abnormalities, reasons that would not likely bias the findings.

The investigators found that, after four years of follow up, two doses of the vaccine conferred the same strong protection against persistent infection with HPV 16 and 18 as did the full three-dose regimen. From just a single dose, they also observed a high level of protection, but they are cautious about the long-term efficacy of a single dose because other vaccines of this type usually require a booster dose. Additional studies are needed to evaluate the efficacy of a single dose, as well as the duration of protection for both one and two doses.

"Our study provides evidence that an HPV vaccine program using two doses will work. It may be that vaccinating more women, with fewer doses for each, will reduce cervical cancer incidence more than a standard three-dose program that vaccinates fewer women," said Aimée R. Kreimer, Ph.D., lead author and investigator in NCI’s Division of Cancer Epidemiology and Genetics. "The main question will be whether the duration of protection from fewer doses is adequate."

Kreimer emphasized that findings from this study of the Cervarix vaccine in women in Costa Rica may not be relevant for all populations, such as those in which HIV infection, malnutrition, or endemic diseases may influence the immune response. In addition, it is not known whether the same results would be obtained with the other FDA-approved HPV vaccine, Gardasil, because the vaccine formulations are different.

"Further studies are needed to confirm our findings in other populations as well as to quantify the duration of protection for fewer than three doses," said Kreimer. "If other studies confirm that fewer than three doses provide adequate protection against persistent cervical HPV 16 and 18 infection, we may be one step closer to prevention of cervical cancer, especially for women in resource-poor settings, where the need is greatest."

It is important to note that regulatory agencies have approved the HPV vaccine based on prevention of cervical precancers, not persistent infections. From studying the natural history of HPV and cervical cancer, experts know that persistent infections are first steps toward precancer. Furthermore, vaccine recommendations take into consideration many factors and studies. In the United States, the CDC’s Advisory Committee on Immunization Practices determines federal recommendations regarding vaccination.

This study was carried out by an international team of experts from the NCI, the Costa Rica HPV Vaccine Trial, and colleagues at DDL Diagnostic Laboratory in the Netherlands.

NCI leads the National Cancer Program and the NIH effort to dramatically reduce the burden of cancer and improve the lives of cancer patients and their families, through research into prevention and cancer biology, the development of new interventions, and the training and mentoring of new researchers. For more information about cancer, please visit the NCI Web site at www.cancer.gov or call NCI's Cancer Information Service at 1-800-4-CANCER (1-800-422-6237). 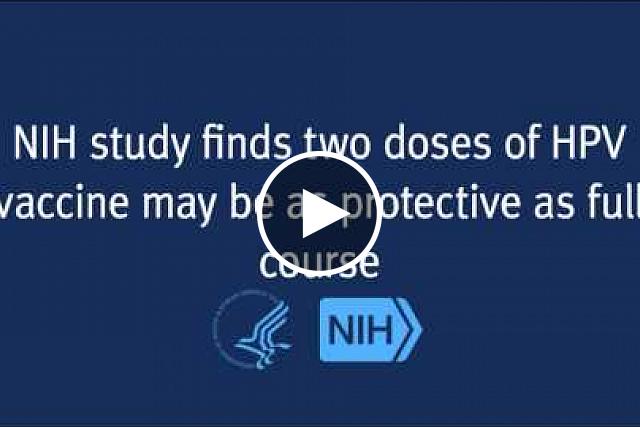 Two doses of the human papillomavirus (HPV) vaccine Cervarix are as effective as the current standard three-dose regimen after four years of follow-up according to the results of a community-based clinical trial on Cervarix in Costa Rica.