New research shows a link between use of two pesticides, rotenone and paraquat, and Parkinson's disease. People who used either pesticide developed Parkinson’s disease approximately 2.5 times more often than non-users.

"Rotenone directly inhibits the function of the mitochondria, the structure responsible for making energy in the cell," said Freya Kamel, Ph.D., a researcher in the intramural program at NIEHS and co-author of the paper appearing online in the journal Environmental Health Perspectives. "Paraquat increases production of certain oxygen derivatives that may harm cellular structures. People who used these pesticides or others with a similar mechanism of action were more likely to develop Parkinson's disease.

The authors studied 110 people with Parkinson’s disease and 358 matched controls from the Farming and Movement Evaluation (FAME) Study (http://www.niehs.nih.gov/research/atniehs/labs/epi/studies/fame/index.cfm) to investigate the relationship between Parkinson’s disease and exposure to pesticides or other agents that are toxic to nervous tissue. FAME is a case-control study that is part of the larger Agricultural Health Study (http://www.niehs.nih.gov/research/atniehs/labs/epi/studies/ahs/index.cfm), a study of farming and health in approximately 90,000 licensed pesticide applicators and their spouses. The investigators diagnosed Parkinson's disease by agreement of movement disorder specialists and assessed the lifelong use of pesticides using detailed interviews.

There are no home garden or residential uses for either paraquat or rotenone currently registered. Paraquat use has long been restricted to certified applicators, largely due to concerns based on studies of animal models of Parkinson's disease. Use of rotenone as a pesticide to kill invasive fish species is currently the only allowable use of this pesticide.

"These findings help us to understand the biologic changes underlying Parkinson’s disease. This may have important implications for the treatment and ultimately the prevention of Parkinson's disease," said Caroline Tanner, M.D., Ph.D., clinical research director of the Parkinson’s Institute and Clinical Center, and lead author of the article.

The NIEHS supports research to understand the effects of the environment on human health and is part of NIH. For more information on environmental health topics, visit www.niehs.nih.gov. Subscribe to one or more of the NIEHS news lists (www.niehs.nih.gov/news/releases/newslist/index.cfm) to stay current on NIEHS news, press releases, grant opportunities, training, events, and publications. 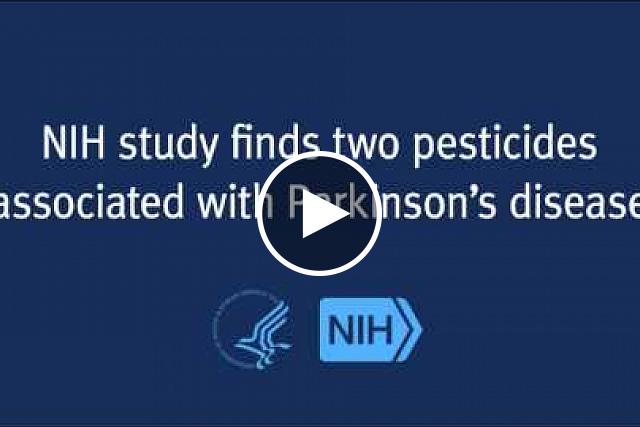 New research shows a link between use of two common pesticides, rotenone and paraquat, and Parkinson's disease (PD). The study was a collaborative effort conducted by researchers at the National Institute of Environmental Health Sciences (NIEHS), which is part of the National Institutes of Health (NIH), and the Parkinson’s Institute and Clinical Center in California.