Overweight and obesity associated with increased risk of death.

A study looking at deaths from any cause found that a body mass index (BMI) between 20.0 and 24.9 is associated with the lowest risk of death in healthy non-smoking adults. Investigators also provided precise estimates of the increased risk of death among people who are overweight and obese. Previous studies that examined the risks from being overweight were inconclusive, with some reporting only modestly increased risks of death and others showing a reduced risk. Also, the precise risks for different levels of obesity were uncertain. The research team included investigators from the National Cancer Institute (NCI), part of the National Institutes of Health, and collaborators from a dozen other major research institutions worldwide. The results appear in the Dec. 2, 2010, issue of the New England Journal of Medicine.

BMI, the most commonly used measure for body fat, is calculated by dividing a person's weight in kilograms by the square of his/her height in meters (kg/m2). Current guidelines from the U.S. Centers for Disease Control and Prevention, and the World Health Organization define a normal BMI range as 18.5 to 24.9. Overweight is defined as a BMI of 25.0 to 29.9; obesity is defined as a BMI over 30.0; and severe obesity is defined as BMI 35 or higher. For a BMI calculator, go to http://www.nhlbisupport.com/bmi/bmicalc.htm.

Obesity has emerged as a leading public health concern in the United States. It has been well-established that people who are obese face increased risks of death from heart disease, stroke, and certain cancers. Currently, two-thirds of U.S. adults are overweight or obese. Even more worrisome, 17 percent of women and 11 percent of men are severely obese.

In this large analysis, investigators pooled data from 19 long-term studies designed to follow participants over time, from 5 to 28 years, depending on the study.

"By combining data on nearly 1.5 million participants from 19 studies we were able to evaluate a wide range of BMI levels and other characteristics that may influence the relationship between excess weight and risk of death," said NCI's Amy Berrington de Gonzalez, D.Phil., lead author of the study. "Smoking and pre-existing illness or disease are strongly associated with the risk of death and with obesity. A paramount aspect of the study was our ability to minimize the impact of these factors by excluding those participants from the analysis."

The investigators observed similar patterns of risk even after accounting for differences in alcohol consumption, physical activity, and education level. The increased risk of death for a BMI of 25 or greater was also seen in all age groups, although it was more prominent for those who were overweight or obese before age 50.

The investigators gathered information about BMI and other characteristics from questionnaires participants completed at the beginning of each study. Causes of death were obtained from death certificates or medical records. This analysis was restricted to non-Hispanic whites aged 19 to 84. The investigators noted the relationship between BMI and mortality may differ across racial and ethnic groups. Other efforts are underway to study the effect of BMI on mortality in other racial and ethnic groups.

The full list of research institutions and studies participating in NCI's BMI and All-Cause Mortality Pooling Project is available at http://epi.grants.cancer.gov/bmi/. To learn more about the Division of Cancer Epidemiology and Genetics, please visit: http://dceg.cancer.gov.

NCI leads the National Cancer Program and the NIH effort to dramatically reduce the burden of cancer and improve the lives of cancer patients and their families, through research into prevention and cancer biology, the development of new interventions, and the training and mentoring of new researchers. For more information about cancer, please visit the NCI Web site at http://www.cancer.gov or call NCI's Cancer Information Service at 1-800-4-CANCER (1-800-422-6237). 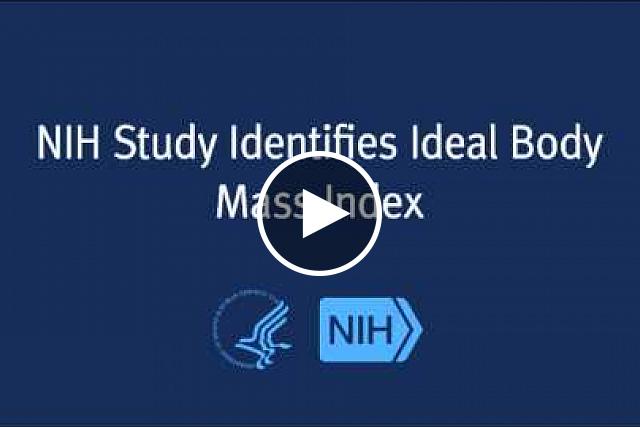 A study of nearly 1.5 million adults looking at deaths from any cause, found that a body mass index (BMI) between 20.0 and 24.9 is associated with lowest risk of death compared to other BMI levels. In addition, individuals who were overweight were 13 percent more likely to die during the study follow-up period (a median of 10 years) than those with a normal BMI.