Highly visible cooperative projects, in which colleges and their surrounding communities target off-campus drinking settings, can reduce harmful alcohol use among college students, according to a report by researchers supported by the National Institute on Alcohol Abuse and Alcoholism (NIAAA), part of the National Institutes of Health.

"This innovative, important study is a valuable contribution to the search for solutions to the alcohol problems that beset colleges and universities throughout the country," says NIAAA Acting Director Kenneth R. Warren, Ph.D.

"Other investigators have noted the need for studies of multi-strategy cooperative prevention approaches to reduce harmful college drinking," notes Dr. Saltz, a senior research scientist at the Prevention Research Center in Berkeley, Calif. "Our study addresses that need." Beginning in 2003, Dr. Saltz and his colleagues conducted random surveys of students from each of the participating schools. The survey documented that heavy drinking at off-campus parties was a common problem. Policy and enforcement interventions were implemented in 2005 and 2006 at half of the universities, with the other half also monitored for comparison. Interventions included nuisance party enforcement operations, surveillance to prevent alcohol sales to minors, drunken driving checkpoints, social host ordinances, and use of campus and local media to increase the visibility of the interventions.

To assess the effectiveness of the interventions, the researchers measured the proportion of drinking occasions in which students got drunk in various settings. They found significantly greater reductions in the incidence and likelihood of intoxication at off-campus parties and at bars and restaurants for students at the intervention universities. Students at intervention universities also reported a lower likelihood of drinking to intoxication the last time they attended an off-campus party, a bar or restaurant, or other drinking settings. The greatest reductions were found at universities with the highest intensity of intervention implementation, achieved through heavy publicity and highly visible enforcement activities.

"Nearly as significant was that we saw no concurrent increase in drinking at non-targeted settings such as parks, beaches, or residence halls," Dr. Saltz says. "Some fear that more rigorous alcohol control measures will merely drive college student drinking to other, presumably more dangerous, settings, but that was not the case here."

"These findings should give college administrators and surrounding communities some degree of optimism that student drinking is amenable to a combination of well-chosen, evidence-based universal prevention strategies," says Dr. Saltz. "Here, one set of alcohol control strategies was found to be effective, but other combinations may work as well, or even better." 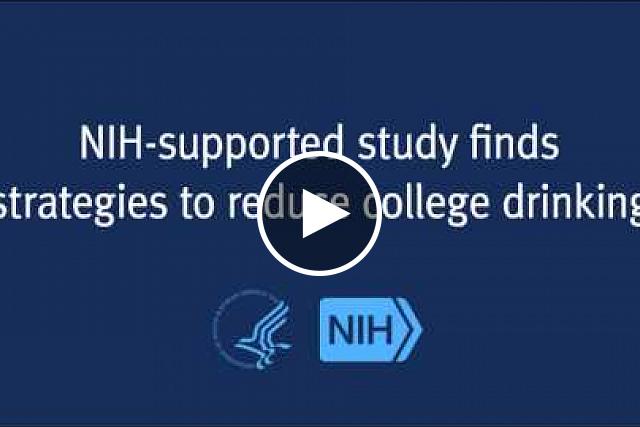 NIAAA-supported researchers undertook the present study, the Safer California Universities study, to address that need. Researchers conducted a trial of college and community alcohol prevention strategies at 14 large public universities in California. They found that heavy drinking at off-campus parties was reduced at universities that implemented highly visible prevention projects in cooperation with their surrounding communities. The greatest reductions were found at universities with the highest intensity of intervention implementation, achieved through heavy publicity and highly visible enforcement activities.