Researchers have shown in mice how immune cells in the brain target and remove unused connections between brain cells during normal development. This research, supported by the National Institutes of Health, sheds light on how brain activity influences brain development, and highlights the newly found importance of the immune system in how the brain is wired, as well as how the brain forms new connections throughout life in response to change.

Disease-fighting cells in the brain, known as microglia, can prune the billions of tiny connections (or synapses) between neurons, the brain cells that transmit information through electric and chemical signals. This new research demonstrates that microglia respond to neuronal activity to select synapses to prune, and shows how this pruning relies on an immune response pathway — the complement system — to eliminate synapses in the way that bacterial cells or other pathogenic debris are eliminated. The study was led by Beth Stevens, Ph.D., assistant professor of neurology at Boston Children's Hospital and Harvard Medical School.

The brain is created with many more synapses than it retains into adulthood. As the brain develops, it goes through dynamic changes to refine its circuitry, trimming away the synaptic connections that do not have a lot of activity, and preserving the stronger, more active synapses. This period, known as synaptic pruning, is a key part of normal brain development.

Scientists do not have a clear understanding of how these synapses are selected, targeted and then pruned. However, precise elimination of unused synapses and strengthening those that are most needed is essential for normal brain function. Many childhood disorders, such as amblyopia (a loss of vision in one eye that can occur when the eyes are misaligned), various forms of mental retardation, epilepsy and autism are thought to be due to abnormal brain development.

Microglia originate in the bone marrow and transform into an activated state to defend the body against infections. Activated microglia are also found in other disease states, ranging from stroke to Alzheimer's disease. It is not always clear, however, if these cells cause degeneration of brain cells, or if they are part of the brain's recovery process. In more recent years, several research groups reported that activated microglia are also present in the normal brain. Additionally, during the most robust synaptic pruning periods there is an increased number of activated microglia present and clustered around synapses.

As reported in the May 24 issue of Neuron, scientists in Dr. Stevens's lab used the visual system in mice to study synaptic pruning, a model that undergoes robust change and remodeling during development and which has circuitry that is well-defined and easy to manipulate. Researchers labeled neurons that project from the eye into an area of the brain called the lateral geniculate nucleus, or LGN, and found that reactive microglia contained portions of the synapses from the labeled neurons. They also saw that these labeled pieces of synaptic material were specifically found inside the microglia's lysosomes — compartments responsible for digesting foreign particles.

The researchers then investigated if the amount of neuronal activity at a synapse determines whether microglia target it for removal. They used a drug to increase activity in the neurons projecting from one eye and saw less pruning of synapses in the corresponding brain region, as compared to the untreated eye. When they used a drug to reduce activity, this resulted in more pruning compared to the untreated eye. The researchers think microglia select a synapse for removal based on the synapse's level of activity. This may be directly relevant to amblyopia, a loss of vision in one eye that can occur when the eyes are misaligned. Children with amblyopia will preferentially use one eye and vision in the less used eye deteriorates due loss of synapses and cells in the LGN.

Earlier research revealed that proteins involved in the complement system are found near synapses during development and are necessary for pruning. To see if these same proteins are used by microglia to shape neuronal connections, the researchers disrupted complement pathway proteins that are found only in the brain’s immune cells. Their results indicate that these complement proteins signal the microglia to trim away synapses, and suggest that immune system pathways are key to proper synaptic pruning.

"The concept that microglia prune synapses using immune system pathways has been difficult to prove," said Edmund Talley, Ph.D., program director at the National Institute of Neurological Disorders and Stroke, "This exquisitely careful and meticulous research confirms the role of microglia in brain development, plasticity and learning."

Dr. Stevens said the study sheds light on the role of microglia in the normal brain, and supports further investigations into the role of microglia in brain disease. "Almost every neurodegenerative brain disease involves several interesting common denominators," she said. "It's becoming increasingly recognized that early synapse loss is a hallmark of many neurodegenerative diseases."

NINDS is the nation’s leading funder of research on the brain and nervous system. The NINDS mission is to reduce the burden of neurological disease — a burden borne by every age group, by every segment of society, by people all over the world. 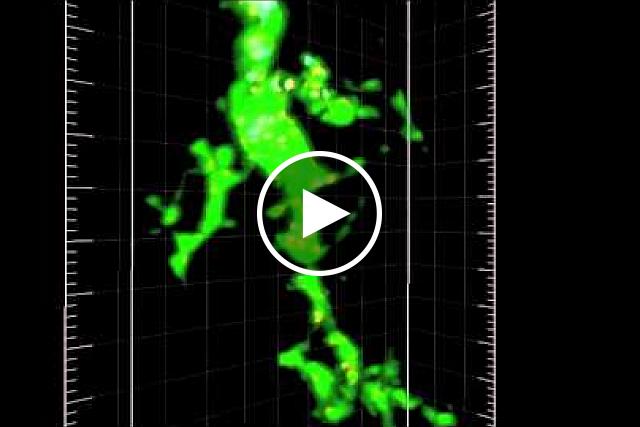 Immune cell in the brain swallows synapses to sculpt neurons during development: A microglial cell (green) from the developing mouse brain is shown as a 3-D image and 3-D computer reconstruction. Synapses from neurons projecting from the eyes (red and blue) are engulfed and seen inside the microglial cell.