Paralyzed individuals use thought-controlled robotic arm to reach and grasp

In an ongoing clinical trial, a paralyzed woman was able to reach for and sip from a drink on her own – for the first time in nearly 15 years – by using her thoughts to direct a robotic arm. The trial, funded in part by the National Institutes of Health, is evaluating the safety and feasibility of an investigational device called the BrainGate neural interface system. This is a type of brain-computer interface (BCI) intended to put robotics and other assistive technology under the brain's control.

A report published today in Nature describes how two individuals — both paralyzed by stroke — learned to use the BrainGate system to make reach-and-grasp movements with a robotic arm, as part of the BrainGate2 clinical trial. The report highlights the potential for long-term use and durability of the BrainGate system, part of which is implanted in the brain to capture the signals underlying intentional movement. It also describes the most complex functions to date that anyone has been able to perform using a BCI.

For the woman, it was the first time since her stroke that she was able to sip a drink without help from a caregiver.

"The smile on her face was a remarkable thing to see. For all of us involved, we were encouraged that the research is making the kind of progress that we had all hoped," said the trial's lead investigator, Leigh Hochberg, M.D., Ph.D., who is an associate professor of engineering at Brown University in Providence, R.I. and a critical care neurologist at Massachusetts General Hospital (MGH)/Harvard Medical School in Boston.

"Years after the onset of paralysis, we found that it was still possible to record brain signals that carry multi-dimensional information about movement and that those signals could be used to move an external device," Dr. Hochberg said.

He noted that the technology is years away from practical use and that the trial participants used the BrainGate system under controlled conditions in their homes with a technician present to calibrate it.

The BrainGate neural interface system consists of a sensor to monitor brain signals and computer software and hardware that turns these signals into digital commands for external devices. The sensor is a baby aspirin-sized square of silicon containing 100 hair-thin electrodes, which can record the activity of small groups of brain cells. It is implanted into the motor cortex, a part of the brain that directs movement.

"This technology was made possible by decades of investment and research into how the brain controls movement. It’s been thrilling to see the technology evolve from studies of basic neurophysiology and move into clinical trials, where it is showing significant promise for people with brain injuries and disorders," said Story Landis, Ph.D., director of NIH's National Institute of Neurological Disorders and Stroke (NINDS). The institute funds BCI research in hopes of restoring function and improving quality of life for people coping with limb amputations or paralysis from spinal cord injury, stroke or neuromuscular disorders.

NIH has supported basic and applied research in this area for more than 30 years. In 2009 and 2010, an additional $3.8 million in NIH funding was made possible through the Recovery Act.

The latest analysis from the BrainGate2 trial focused on two participants — a 58-year-old woman and a 66-year-old man. Both individuals are unable to speak or move their limbs because of brainstem strokes they had years ago — the woman's in 1996 and the man's in 2006. In the trial, both participants learned to perform complex tasks with a robotic arm by imagining the movements of their own arms and hands.

In one task, several foam targets were mounted on levers on a tabletop and programmed to pop up one at a time, at different positions and heights. The participants had less than 30 seconds to grasp each target using the DEKA Arm System (Generation 2), which is designed to work as a prosthetic limb for people with arm amputations. One participant was able to grasp the targets 62 percent of the time, and the other had a 46 percent success rate.

In some sessions, the woman controlled a DLR Light-Weight Robot III arm, which is heavier than the DEKA arm and designed to be used as an external assistive device. She used this arm prior to the DEKA arm in the foam target task, and had a success rate of 21 percent. In other sessions with the DLR arm, her task was to reach for a bottled drink, bring it to her mouth and sip from a straw. She was able to complete four out of six attempts.

This is not the first glimmer of hope from human BCI research. Participants in the BrainGate trial and other studies have also used BCI technology to perform point-and-click actions with a computer cursor, a level of control that has been used for communication.

"This is another big jump forward to control the movements of a robotic arm in three-dimensional space. We’re getting closer to restoring some level of everyday function to people with limb paralysis," said John Donoghue, Ph.D., who leads the development of BrainGate technology and is the director of the Institute for Brain Science at Brown University.

Dr. Donoghue said the woman's ability to use the BrainGate was especially encouraging because her stroke occurred nearly 15 years ago and her sensor was implanted more than five years ago. Some researchers have wondered whether neurons in the motor cortex might die or stop generating meaningful signals after years of disuse. Researchers in the field have also worried that years after implantation, the sensor might break down and become less effective at enabling complex motor functions.

Roderic Pettigrew, M.D., Ph.D., director of NIH's National Institute of Biomedical Imaging and Bioengineering (NIBIB), which supports the research, indicated that the technology is promising, but at present is still undergoing development and evaluation. "The researchers have begun the long, difficult process of testing and refining the system with feedback from patients, and they've found that it is possible for a person to mentally control a robotic limb in three-dimensional space. This represents a remarkable advance," he said.

As the trial continues, the BrainGate research team needs to test the technology in more individuals, they said. They envision a system that would be stable for decades, wireless and fully automated. For now, the sensor — and therefore the user — must be connected via cables to the rest of the system. Prior to each session with the robotic arms, a technician had to perform a calibration procedure that lasted 31 minutes on average. Improvements are also needed to enhance the precision and speed of control. In the foam target task, for example, a successful reach-and-grasp motion typically took almost 10 seconds.

The ultimate goal for helping people with paralysis is to reconnect the brain directly to paralyzed limbs rather than robotic ones, the researchers said. In the future, the BrainGate system might be used to control a functional electrical stimulation (FES) device, which delivers electrical stimulation to paralyzed muscles. Such technology has shown promise in monkeys. The Eunice Kennedy Shriver National Institute for Child Health and Human Development (NICHD) has long supported the clinical trial research for BrainGate, with the goal of enabling mental control of an FES system for limb movement. In previous reports from the BrainGate2 trial, a participant was able to use the BrainGate system to direct the movements of a virtual, computer-animated arm designed to simulate FES control of a real arm.

To support this research, NIH has worked closely with the Department of Veterans Affairs (VA) and the Defense Advanced Research Projects Agency (DARPA), the research arm of the Department of Defense. DARPA supports development of the DEKA arm. Development of the DLR arm is funded by the German aerospace agency DLR. NIH has supported the fundamental neuroscience and BCI development, and the clinical research in collaboration with the VA. Drs. Hochberg and Donoghue hold research positions with the Providence VA Medical Center.

Dr. Donoghue is supported by a Javits Neuroscience Investigator award (NS025074) from NINDS, and by a grant (EB007401) from NIBIB and NICHD. The research is also supported by contracts (HD53403, HD100018) from NICHD's National Center for Medical Rehabilitation Research to Robert Kirsch, Ph.D., at Case Western Reserve University, Cleveland. Additional support came from an NIH Challenge grant (HD063931) to Dr. Donoghue and a grant (DC009899) from the National Institute on Deafness and other Communication Disorders (NIDCD) to Dr. Hochberg, which were funded all or in part through the Recovery Act.

The BrainGate trial began in 2004 and was run by Cyberkinetics Inc., in collaboration with Brown University and MGH. NICHD began funding the trial in 2005. After Cyberkinetics withdrew from the research for financial reasons, funding continued through this NICHD contract, MGH became the clinical trial and administrative lead, and the trial was renamed BrainGate2. The trial is currently recruiting. For more information, visit: http://www.clinicaltrials.gov/ct2/show/NCT00912041 or http://www.braingate2.org.

NIBIB is dedicated to improving health by bridging the physical and biological sciences to develop and apply new biomedical technologies.

NICHD sponsors research on development, before and after birth; maternal, child, and family health; reproductive biology and population issues; and medical rehabilitation.

NIDCD supports and conducts research and research training on the normal and disordered processes of hearing, balance, taste, smell, voice, speech and language and provides health information, based upon scientific discovery, to the public.

NINDS is the nation's leading funder of research on the brain and nervous system. The NINDS mission is to reduce the burden of neurological disease — a burden borne by every age group, by every segment of society, by people all over the world. 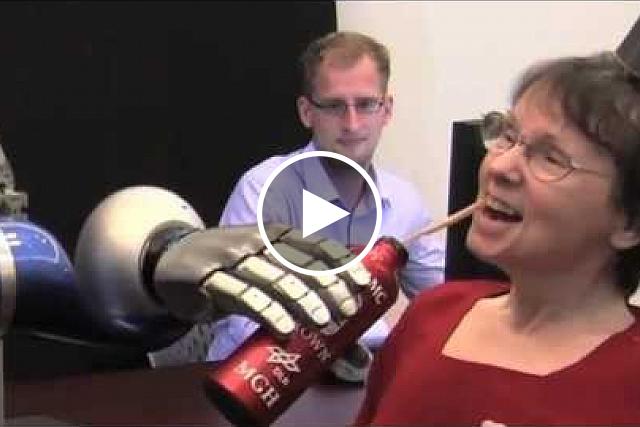