A drug commonly used for the treatment of chronic obstructive pulmonary disease (COPD) successfully treats adults whose asthma is not well-controlled on low doses of inhaled corticosteroids, reported researchers supported by the National Heart, Lung, and Blood Institute (NHLBI), part of the National Institutes of Health.

"This study's results show that tiotropium bromide might provide an alternative to other asthma treatments, expanding options available to patients for controlling their asthma," said NHLBI Acting Director Susan B. Shurin, M.D. "The goal in managing asthma is to prevent symptoms so patients can pursue activities to the fullest."

According to the study, adding tiotropium bromide to low doses of inhaled corticosteroids is more effective at controlling asthma than doubling inhaled corticosteroids alone, and as effective as adding the long-acting beta agonist salmeterol. The results were published online today in the New England Journal of Medicine and presented at the Annual Congress of the European Respiratory Society in Barcelona, Spain.

Increasing inhaled corticosteroids or supplementing them with long-acting beta agonists like salmeterol are the two preferred treatment options available for adults whose asthma is poorly controlled on low doses of inhaled corticosteroids. However, higher doses of corticosteroids do not improve symptoms for all patients and can have significant side effects, while long-acting beta agonists have come under scrutiny for their risk of worsening asthma symptoms that could result in hospitalization and, rarely, death.

"Tiotropium relaxes smooth muscle in the airways through a different mechanism than beta agonists, and thus may help people who do not respond well to currently recommended treatments," said study lead Stephen Peters, M.D., Ph.D., of Wake Forest University Baptist Medical Center, Winston-Salem, N.C. "Further analysis of the study data will help us better understand which patients respond best to tiotropium. Then we will need to conduct longer-term studies to establish its safety for asthma patients and to determine its effect on the frequency and severity of asthma exacerbations."

Tiotropium bromide was shown to be effective using several asthma control measurements, including patients' day-to-day lung function as well as the number of days in which they had no asthma symptoms and did not need to use their albuterol rescue inhalers. When patients began the trial, their average number of such "asthma control days" was 77 per year (extrapolated from the treatment period). Doubling corticosteroids gave patients another 19 symptom-free days on average, while adding tiotropium to low-dose corticosteroids gave them another 48.

"Much research over the last century has explored the role of cholinergic mechanisms [which constrict the airways] and anticholinergic therapies in asthma. However, this is the first study to explore adding an anticholinergic inhaler to low-dose inhaled corticosteroids," said James Kiley, Ph.D., director of the NHLBI's Division of Lung Diseases. "The Asthma Clinical Research Network is designed to address exactly these kinds of practical and important management questions, with the ultimate goal of helping asthma patients."

Part of the National Institutes of Health, the National Heart, Lung, and Blood Institute (NHLBI) plans, conducts, and supports research related to the causes, prevention, diagnosis, and treatment of heart, blood vessel, lung, and blood diseases, and sleep disorders. The Institute also administers national health education campaigns on women and heart disease, healthy weight for children, and other topics. NHLBI press releases, information on NHLBI's role in the American Recovery and Reinvestment Act, and other materials are available online at www.nhlbi.nih.gov. 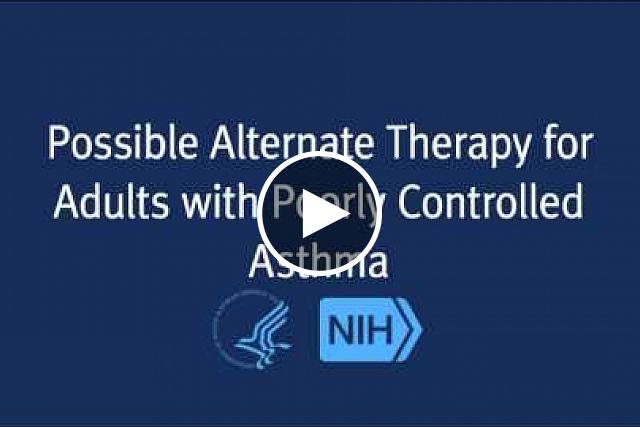 A drug commonly used for the treatment of chronic obstructive pulmonary disease (COPD), Tiotropium, successfully treats adults whose asthma is not well-controlled on low doses of inhaled corticosteroids, reported researchers supported by the National Heart, Lung, and Blood Institute (NHLBI), part of the National Institutes of Health.