NIH-funded study identifies brain pathway in rodents that could be target of new treatments for smoking and weight control.

A new study uncovers a brain mechanism that could be targeted for new medications designed to help people quit smoking without gaining weight. This research, funded by the National Institute on Drug Abuse (NIDA), part of the National Institutes of Health, shows that a specific subclass of brain nicotinic receptor is involved in nicotine’s ability to reduce food intake in rodents. Prior research shows that the average weight gain after smoking is less than 10 pounds, but fear of weight gain can discourage some people who would like to quit.

In the study, to be published in the June 10 issue of Science, researchers found that a nicotine-like drug, cytisine, specifically activated nicotinic receptors in the hypothalamus — a brain center that controls feeding. This resulted in the activation of a circuit that reduced food intake and body fat in a mouse model. This effect was very specific, since a drug that prevented cytisine from binding to its hypothalamic receptors blocked the reduction in food intake.

Through the use of tobacco, nicotine is one of the most heavily used addictive drugs and the leading preventable cause of disease, disability, and death in the United States. According to the Centers for Disease Control and Prevention, cigarette smoking results in more than 440,000 preventable deaths each year — about 1 in 5 U.S. deaths overall. Despite the well-documented health costs of smoking, many smokers report great difficulty quitting.

"These mouse models allow us to explore the mechanisms through which nicotine acts in the brain to reduce food intake," said Dr. Marina Picciotto, of Yale University, New Haven, Conn. and senior author for the article. "We found that nicotine reduced eating and body fat through receptors implicated in nicotine aversion and withdrawal rather than reward and reinforcement."

"These results indicate that medications that specifically target this pathway could alleviate nicotine withdrawal as well as reduce the risk of overeating during smoking cessation," said NIDA Director Dr. Nora D. Volkow. "Although more research is warranted, such a highly selective compound might be more effective than drugs that act on more than one type of nicotinic receptor."

For information on tips to maintain a healthy weight while quitting smoking go to Forever Free: Smoking and Weight, a publication of the National Cancer Institute. For additional information on resources to help quit smoking, go to www.nida.nih.gov/DrugPages/Nicotine.html and smokefree.gov.

The study can be found online at: www.sciencemag.org/.

The National Institute on Drug Abuse is a component of the National Institutes of Health, U.S. Department of Health and Human Services. NIDA supports most of the world's research on the health aspects of drug abuse and addiction. The Institute carries out a large variety of programs to inform policy and improve practice. Fact sheets on the health effects of drugs of abuse and information on NIDA research and other activities can be found on the NIDA home page at www.drugabuse.gov. To order publications in English or Spanish, call NIDA's new DrugPubs research dissemination center at 1-877-NIDA-NIH or 240-645-0228 (TDD) or fax or email requests to 240-645-0227 or drugpubs@nida.nih.gov. Online ordering is available at http://drugpubs.drugabuse.gov. NIDA's new media guide can be found at http://drugabuse.gov/mediaguide/. 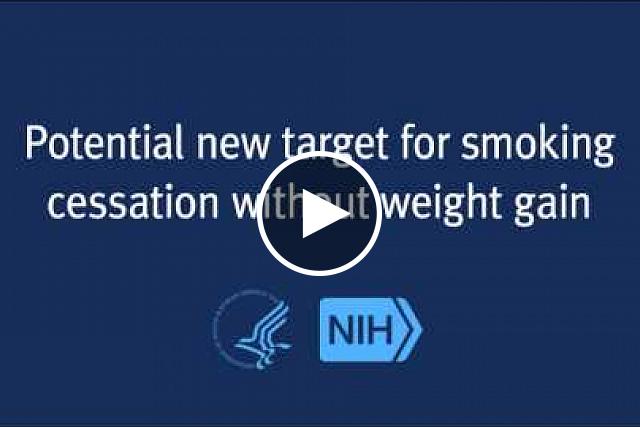 A new study published in Science magazine identifies a brain pathway that could be a target of new treatments for smoking and weight control.