A North Star amid "a constellation of multiple rare diseases".

Scientists are eyeing a rare genetic glitch for clues to improved treatments for some people with schizophrenia (http://www.nimh.nih.gov/health/topics/schizophrenia/index.shtml) — even though they found the mutation in only one third of 1 percent of patients.

In the study, funded in part by the National Institutes of Health, schizophrenia patients were 14 times more likely than controls to harbor multiple copies of a gene on Chromosome 7. The mutations were in the gene for VIPR2, the receptor for vasoactive intestinal peptide (VIP) — a chemical messenger known to play a role in brain development. An examination of patients' blood confirmed that they had overactive VIP activity.

Discovery of the same genetic abnormality in even a small group of patients buoys hopes for progress in a field humbled by daunting complexity in recent years. The researchers’ previous studies (http://www.nimh.nih.gov/science-news/2008/rates-of-rare-mutations-soar-three-to-four-times-higher-in-schizophrenia.shtml) had suggested that the brain disorder that affects about 1 percent of adults might, in many cases, be rooted in different genetic causes in each affected individual, complicating prospects for cures.

"Genetic testing for duplications of the VIP receptor could enable early detection of a subtype of patients with schizophrenia, and the receptor could also potentially become a target for development of new treatments," explained Jonathan Sebat, Ph.D., of the University of California, San Diego, who led the research team. "The growing number of such rare duplications and deletions found in schizophrenia suggests that what we have been calling a single disorder may turn out, in part, to be a constellation of multiple rare diseases."

Sebat, a grantee of the NIH's National Institute of Mental Health — and colleagues at 14 research centers world-wide — report on their findings Feb. 23, 2011, in the journal Nature.

"Although such copy number variations may explain only a small fraction of cases, these rare mutations can yield important clues to the underlying causes of more common forms," noted NIMH Director Thomas R. Insel, M.D. "This new finding with VIPR2 suggests a series of important follow up studies, even in people without the mutation."

Schizophrenia is known to have a strong genetic component — having a parent or sibling with the disorder increases one's risk tenfold. Yet, genetic studies have so far explained relatively few cases of the illness. As hopes wane that common genetic variations might account for many cases, evidence is mounting (http://www.nimh.nih.gov/about/director/2010/in-search-of-the-missing-genetic-signals.shtml) that patients harbor disproportionately large numbers of individually rare copy number variations (CNVs) – some shared in families, but many apparently unique to one individual.

The VIPR2 CNV is among the first to implicate a specific gene and neurobiological pathway in schizophrenia. CNVs previously identified, spanning dozens of genes, were too large to yield such clues. In the new genome-wide scan, Sebat and colleagues found the mutation in 29 of 8290 patients (.35 percent) compared to only 2 of 7431 healthy controls. A few other schizophrenia-linked CNVs seen in previous studies were also detected.

VIP and its receptor are known to play a role in regulating the growth of neurons and in learning and memory. They are also expressed in the immune and cardiovascular systems and in the gut — hence its name.

When VIP binds to the VIPR2 receptor on a neuron, it triggers a key relay chemical within the cell, called cyclic AMP. The researchers found that both VIP and cyclic AMP were overactive in blood cells of patients with the VIPR2 mutations.

"It's likely that cyclic AMP signaling is disturbed in a larger fraction of patients, so it's possible that a treatment that targets VIPR2 might have benefits even for people who don’t have mutations in the VIPR2 gene," said Sebat. "It looks like the volume is turned-up in the whole VIP signaling pathway."

Since the mutations lead to an overexpression of VIPR2, agents that block the receptor, which already exist, might hold potential for treatment development, he added.

In addition to genetic screening of patients for such personalized medicine, Sebat sees opportunities in the new findings for neuroimaging studies. "We must determine how over-expression of VIPR2 impacts the growth, differentiation and function of neurons" and how that influence behavior. Knowing where the VIPR2 gene is expressed in the human brain can point us to specific regions where VIP activity levels may differ between people who carry this mutation and those who don’t.”

Despite the challenges posed by the complexities of CNVs, Sebat is upbeat about prospects for ultimately making sense of the emerging evidence about schizophrenia genetics.

"We hypothesize that the many different genetic causes of schizophrenia may have something in common," he said. “There may be larger groups of patients who may not share the same mutation but, may share the same underlying neurobiological defect.”

The mission of the NIMH is to transform the understanding and treatment of mental illnesses through basic and clinical research, paving the way for prevention, recovery and cure. For more information, visit the NIMH website. 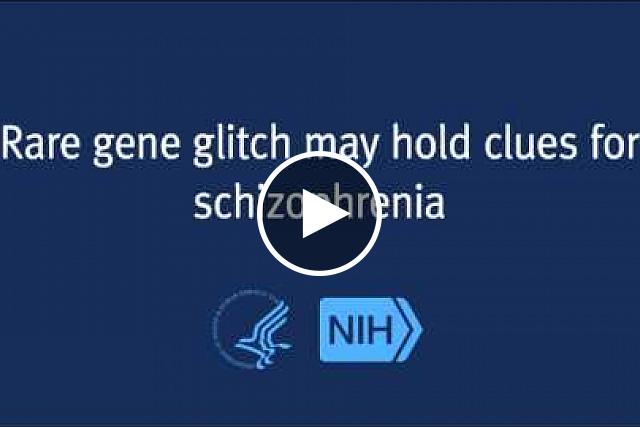 Scientists identify a rare genetic glitch that could help improve treatments for schizophrenia.