Rebooting the brain helps stop the ring of tinnitus in rats

NIH-funded researchers were able to eliminate tinnitus in a group of rats by stimulating a nerve in the neck while simultaneously playing a variety of sound tones over an extended period of time, says a study published today in the advance online publication of the journal Nature. The hallmark of tinnitus is often a persistent ringing in the ears that is annoying for some, debilitating for others, and currently incurable. Similar to pressing a reset button in the brain, this new therapy was found to help retrain the part of the brain that interprets sound so that errant neurons reverted back to their original state and the ringing disappeared. The research was conducted by scientists from the University of Texas at Dallas and MicroTransponder Inc., in Dallas.

"Current treatments for tinnitus generally involve masking the sound or learning to ignore it," said James F. Battey, Jr., M.D., Ph.D., director of the National Institute on Deafness and Other Communication Disorders (NIDCD), which funded a large part of the research. "If we can find a way to turn off the noise, we’ll be able to improve life substantially for the nearly 23 million American adults who suffer from this disorder."

Tinnitus is a symptom some people experience as a result of hearing loss. When sensory cells in the inner ear are damaged, such as from loud noise, the resulting hearing loss changes some of the signals sent from the ear to the brain. For reasons that are not fully understood, some people will develop tinnitus as a result.

"We believe the part of the brain that processes sounds — the auditory cortex — delegates too many neurons to some frequencies, and things begin to go awry," said Michael Kilgard, Ph.D., associate professor of behavior and brain sciences at UT-Dallas, and a co-principal investigator on the study. "Because there are too many neurons processing the same frequencies, they are firing much stronger than they should be."

In addition, the neurons fire in sync with one another and they also fire more frequently when it is quiet. According to Dr. Kilgard, it's these changing brain patterns that produce tinnitus, which is usually a high-pitched tone in one or both ears, but it may also be heard as clicking, roaring, or a whooshing sound.

Dr. Kilgard, along with co-principal investigator Navzer Engineer, M.D., Ph.D., of MicroTransponder, Inc., and others on the research team first sought to induce changes in the auditory cortex of a group of rats by pairing stimulation of the vagus nerve, a large nerve that runs from the head and neck to the abdomen, with the playing of a single tone. When the vagus nerve is stimulated, it releases acetylcholine, norepinephrine, and other chemicals that help encourage changes in the brain. They wanted to find out if they could induce more brain cells to become responsive to that tone over a period of time.

For 20 days, 300 times a day, researchers played a high-pitched tone, at 9 kilohertz (kHz), to eight rats. At the same time that the tone was played, an electrode delivered a very small electrical pulse to the vagus nerve. The researchers found that the number of neurons tuned to the 9 kHz frequency had jumped by 79 percent in comparison to the control rats.

In a second group of rats, they randomly played two different tones — one at 4 kHz and the other at 19 kHz — but stimulated the vagus nerve only for the higher tone. Neurons tuned to the higher frequency increased by 70 percent while neurons tuned to the 4 kHz tone actually decreased in number, indicating that the tone alone was not enough to initiate the change. It had to be accompanied by vagus nerve stimulation (VNS).

Next, the researchers tested whether tinnitus could be reversed in noise-exposed rats by increasing the numbers of neurons tuned to frequencies other than the tinnitus frequency. A group of the noise-exposed rats with tinnitus received VNS that was paired with different tones surrounding the tinnitus frequency 300 times a day for about three weeks. Rats in the control group received VNS with no tones, tones with no VNS, or no therapy. For both groups, measurements were taken four weeks after noise exposure, then 10 days after therapy began, and one day, one week, and three weeks after therapy ended.

Rats that received the VNS paired with tones showed promising results for each time point after therapy began, including midway through therapy, indicating that the ringing had stopped for the treated rats. Conversely, the data from control rats indicated their tinnitus had continued throughout the testing period. What's more, the researchers followed two treated and two control rats for an additional two months and found that the treated rats maintained this benefit for 3.5 months after noise exposure, while the controls continued to be impaired.

The researchers also evaluated neural responses in the auditory cortex in these same rats and found that neurons in the treated rats had returned to their normal levels, where they remained. This indicated that the tinnitus had disappeared. However, the control group levels continued to be distorted, indicating that the tinnitus persisted. Overall, the researchers found that the VNS treatment paired with tones had not only reorganized the neurons to respond to their original frequencies, but it also made the brain responses sharper, decreased excitability, and decreased synchronization of auditory cortex neurons.

VNS is currently being used to treat roughly 50,000 people with epilepsy or depression, and MicroTransponder hopes to conduct clinical studies using VNS with paired tones in tinnitus patients.

"The clinical protocol is being finalized now and a pilot study in tinnitus patients will be conducted in Europe in the near future," said Dr. Engineer, vice president of preclinical affairs at MicroTransponder. "The support of the NIDCD has been essential to allow our research team to continue our work in this important area of tinnitus research." MicroTransponder is a neuroscience-based medical device company that is working to develop treatments for a variety of neurological diseases, including tinnitus, chronic pain, and anxiety.

In the meantime, the researchers are currently working to fine-tune the procedure to better understand such details as the most effective number of paired frequencies to use for treatment; how long the treatment should last; and whether the treatment would work equally well for new tinnitus cases in comparison to long-term cases.

NIDCD supports and conducts research and research training on the normal and disordered processes of hearing, balance, smell, taste, voice, speech and language and provides health information, based upon scientific discovery, to the public. For more information about NIDCD programs, see the Web site at www.nidcd.nih.gov. 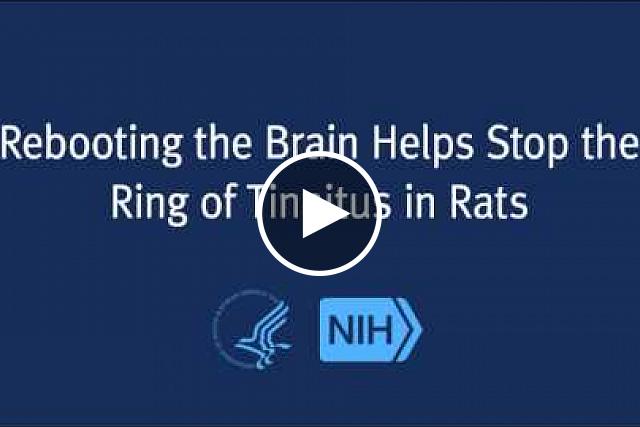 The hallmark of tinnitus is often a persistent ringing in the ears that is annoying for some, debilitating for others, and currently incurable. Similar to pressing a reset button in the brain, a new therapy has been found to help retrain the part of the brain that interprets sound so that errant neurons reverted back to their original state and the ringing disappeared.