Researchers investigate how a developing brain is assembled

Image A shows the twisted up worm embryo inside the egg with the fluorescently labeled cells. The second image shows how the computer program identifies each of the marked cells, and image C shows the untwisted worm.

A new, open-source software that can help track the embryonic development and movement of neuronal cells throughout the body of the worm, is now available to scientists. The software is described in a paper published in the open access journal, eLife on December 3rd by researchers at the National Institute of Biomedical Imaging and Bioengineering (NIBIB) and the Center for Information Technology (CIT); along with Memorial Sloan-Kettering Institute, New York City; Yale University, New Haven, Connecticut; Zhejiang University, China; and the University of Connecticut Health Center, Farmington. NIBIB is part of the National Institutes of Health.

As far as biologists have come in understanding the brain, much remains to be revealed. One significant challenge is determining the formation of complex neuronal structures made up of billions of cells in the human brain. As with many biological challenges, researchers are first examining this question in simpler organisms, such as worms.

Although scientists have identified a number of important proteins that determine how neurons navigate during brain formation, it’s largely unknown how all of these proteins interact in a living organism. Model animals, despite their differences from humans, have already revealed much about human physiology because they are much simpler and easier to understand. In this case, researchers chose Caenorhabditis elegans (C. elegans), because it has only 302 neurons, 222 of which form while the worm is still an embryo. While some of these neurons go to the worm nerve ring (brain) they also spread along the ventral nerve cord, which is broadly analogous to the spinal cord in humans.  The worm even has its own versions of many of the same proteins used to direct brain formation in more complex organisms such as flies, mice, or humans.

“Understanding why and how neurons form and the path they take to reach their final destination could one day give us valuable information about how proteins and other molecular factors interact during neuronal development,” said Hari Shroff, Ph.D., head of the NIBIB research team. “We don’t yet understand neurodevelopment even in the context of the humble worm, but we’re using it as a simple model of how these factors work together to drive the development of the worm brain and neuronal structure. We’re hoping that by doing so, some of the lessons will translate all the way up to humans.”

However, following neurons as they travel through the worm during its embryonic development is not as simple as it might seem. The first challenge was to create new microscopes that could record the embryogenesis of these worms without damaging them through too much light exposure while still getting the resolution needed to clearly see individual cells. Shroff and his team at NIBIB, in collaboration with Daniel Colon-Ramos at Yale University and Zhirong Bao at Sloan-Kettering, tackled this problem by developing new microscopes that improved the speed and resolution at which they could image worm embryonic development.  (Read more at: http://www.nibib.nih.gov/news-events/newsroom/new-microscopes-nih-reveal-live-developing-cells-unprecedented-3-d-clarity)

The images show the step by step process the computer program goes through to the “untwist” a worm image. First, (Image D) the computer identifies the cells to track. Then (Image E) the computer begins to create a lattice that traces the shape of the worm. Once the computer has traced the lattice, it can create a 3D model of the worm embryo (Image F). Finally, it can untwist the model (Image G).

The second problem was that during development the worm begins to “twitch”, moving around inside the egg.

The folding and twisting makes it hard to track cells and parse out movement. For example, if a neuron moves in the span of a couple of minutes, is it because the embryo twisted or because the neuron actually changed position within the embryo? Understanding the mechanisms that move neurons to their final destination is an important factor in understanding how brains form — and is difficult to determine without knowing where and how a neuron is moving. Finally, it can be challenging to determine where a neuron is in 3D space while looking at a two-dimensional image — especially of a worm that’s folded up.

“Imagine you’re trying to keep track of everyone in a crowded auditorium, except that you can only see one person at a time, and the auditorium itself is invisible. This is what it’s like trying to track how neurons in the worm relate to each other,” said Ryan Christensen, Ph.D., the postdoctoral fellow who led the project. “You either need the ability to see everyone at once, or make the auditorium visible so you can place each person in the proper spot and figure out everyone’s movements that way. Our untwisting software allows us to make the auditorium visible and allows us to place individual people (neurons) in their proper context.”

The worm embryo is normally transparent, but the researchers made several cells in the embryo glow with fluorescent proteins to act as markers. When a microscopic image of these cells is fed into the program, the computer identifies each cell and uses the information to create a model of the worm, which it then computationally “untwists” to generate a straightened image. The program also enables a user to check the accuracy of the computer model and edit it when any mistakes are discovered.

In addition, users can also mark cells or structures within the worm embryo they want the program to track, allowing the users to follow the position of a cell as it moves and grows in the developing embryo. This feature could help scientists understand how certain cells develop into neurons, as opposed to other types of cells, and what factors influence the development of the brain and neuronal structure.

Shroff and his colleagues say that such technology will be pivotal in their project to create a 4D neurodevelopmental “worm atlas,” (see also www.wormguides.org) that attempts to catalog the formation of the worm nervous system. This catalog will be the first comprehensive view of how an entire nervous system develops, and Dr. Shroff and his colleagues believe that it will be helpful in understanding the fundamental mechanisms by which all nervous systems, including ours, assemble. They also expect that some of the concepts developed, such as the approach taken to combine neuronal data from multiple embryos, can be applied to additional model organisms besides the worm.

NIBIB’s mission is to improve health by leading the development and accelerating the application of biomedical technologies. The Institute is committed to integrating the physical and engineering sciences with the life sciences to advance basic research and medical care. NIBIB supports emerging technology research and development within its internal laboratories and through grants, collaborations, and training. More information is available at the NIBIB website: http://www.nibib.nih.gov. 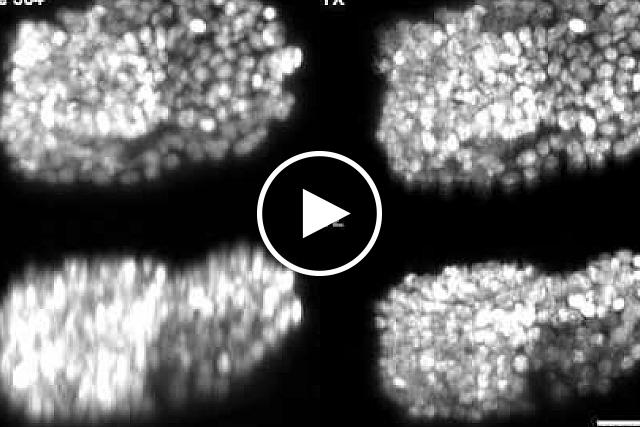 Here, a C. elegans embryo develops and can be seen from two separate view points by a traditional, single-view iSPIM and the new dual-view iSPIM, recently developed by NIBIB researcher Dr. Hari Shroff. 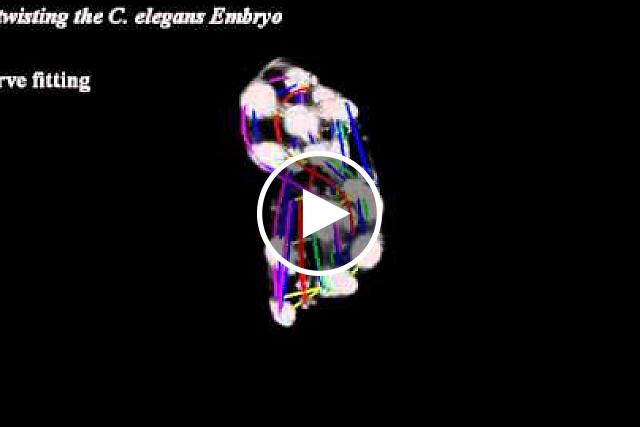 A new, open-source software that can help track the embryonic development and movement of neuronal cells throughout the body of the worm, is now available to scientists.