Researchers have identified distinct differences among the cells comprising a tissue in the retina that is vital to human visual perception. The scientists from the National Eye Institute (NEI) discovered five subpopulations of retinal pigment epithelium (RPE)—a layer of tissue that nourishes and supports the retina’s light-sensing photoreceptors. Using artificial intelligence, the researchers analyzed images of RPE at single-cell resolution to create a reference map that locates each subpopulation within the eye. A report on the research published in Proceedings of the National Academy of Sciences.

“These results provide a first-of-its-kind framework for understanding different RPE cell subpopulations and their vulnerability to retinal diseases, and for developing targeted therapies to treat them,” said Michael F. Chiang, M.D., director of the NEI, part of the National Institutes of Health.

Vision begins when light hits the rod and cone photoreceptors that line the retina in the back of the eye. Once activated, photoreceptors send signals through a complex network of other retinal neurons that converge at the optic nerve before traveling to various centers in the brain. The RPE sits beneath the photoreceptors as a monolayer, one cell deep.

Age and disease can cause metabolic changes in RPE cells that can lead to photoreceptor degeneration. The impact on vision from these RPE changes varies dramatically by severity and where the RPE cells reside within the retina. For example, late-onset retinal degeneration (L-ORD) affects mostly peripheral retina and, therefore, peripheral vision. Age-related macular degeneration (AMD), a leading cause of vision loss, primarily affects RPE cells in the macula, which is crucial for central vision.

Bharti and colleagues sought to determine if there are different RPE subpopulations that might explain the wide spectrum of retinal disease phenotypes. 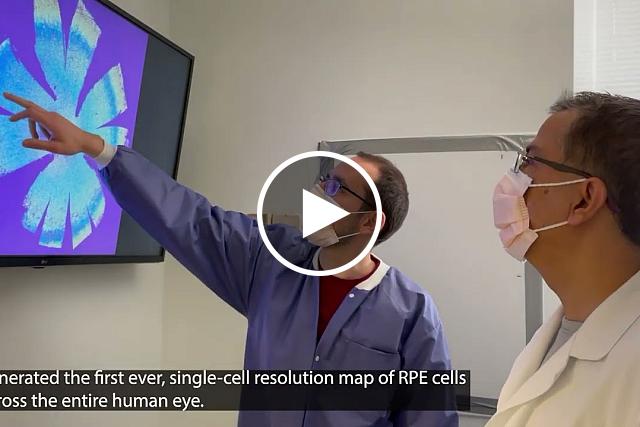 Researchers have identified distinct differences among the cells comprising a tissue in the retina that is vital to human visual perception. The scientists from the National Eye Institute (NEI) discovered five subpopulations of retinal pigment epithelium (RPE)—a layer of tissue that nourishes and supports the retina’s light-sensing photoreceptors. Using artificial intelligence, the researchers analyzed images of RPE at single-cell resolution to create a reference map that locates each subpopulation within the eye. A report on the research published in Proceedings of the National Academy of Sciences.

The team used artificial intelligence (AI) to analyze RPE cell morphometry, the external shape and dimensions of each cell. They trained a computer using fluorescently labelled images of RPE to analyze the entire human RPE monolayer from nine cadaver donors with no history of significant eye disease.

Morphometry features were calculated for each RPE cell – on average, about 2.8 million cells per donor; 47.6 million cells were analyzed in total. The algorithm assessed each cell’s area, aspect ratio (width to height), hexagonality, and number of neighbors. Previous studies had suggested that RPE function is tied to the tightness of cellular junctions; the more crowded, the better for indicating cellular health.

Based on morphometry, they identified five distinct RPE cell subpopulations, referred to as P1-P5, organized in concentric circles around the fovea, which is the center of the macula and the most light-sensitive region of the retina. Compared to RPE in the periphery, foveal RPE tend to be perfectly hexagonal and more compactly situated, with higher numbers of neighboring cells.

Unexpectedly, they discovered that the peripheral retina contains a ring of RPE cells (P4) with a cell area very similar to RPE in and around the macula.

“The presence of the P4 subpopulation highlights the diversity within retinal periphery, suggesting that there could be functional differences among RPE that we are currently unaware of,” said the study’s first author, Davide Ortolan, Ph.D. a research fellow in the NEI Ocular and Stem Cell Translational Research Section. “Future studies are needed to help us understand the role of this subpopulation.”

Next, they analyzed RPE from cadavers with AMD. Foveal (P1) RPE tended to be absent due to disease damage, and the differences among cells in the P2-P5 subpopulations were not statistically significant. Overall, the AMD RPE subpopulations tended to be elongated relative to RPE cells not affected by AMD.

“Overall, the results suggest that AI can detect changes of RPE cell morphometry prior to the development of visibly apparent degeneration,” said Ortolan.

Age-related morphometric changes also may appear in some RPE subpopulations before they’re detectable in others. These finding will help inform future studies using noninvasive imaging technologies, such as adaptive optics, which resolve retinal cells in unprecedented detail and could potentially be used to predict changes in RPE health in living patients.

The study was funded by the NEI Intramural Research Program.

This press release describes a basic research finding. Basic research increases our understanding of human behavior and biology, which is foundational to advancing new and better ways to prevent, diagnose, and treat disease. Science is an unpredictable and incremental process— each research advance builds on past discoveries, often in unexpected ways. Most clinical advances would not be possible without the knowledge of fundamental basic research. To learn more about basic research, visit https://www.nih.gov/news-events/basic-research-digital-media-kit.