Saliva is effective in screening for CMV infection in newborns, says NIH-funded research

Swabbing a newborn’s mouth for saliva can be used to quickly and effectively screen for cytomegalovirus (CMV) infection, a leading cause of hearing loss in children, says research in the June 2 issue of the New England Journal of Medicine.

"Most babies infected with CMV don’t show symptoms at birth," said James F. Battey, Jr., M.D., Ph.D., director of the NIDCD. "It’s important for us to develop diagnostic tools to screen babies for congenital CMV infection so that those who test positive can be monitored for possible hearing loss and, if it occurs, provided with appropriate intervention as soon as possible."

CMV is the most common infection passed from a mother to her unborn child. Of the 20,000-30,000 infants who are born infected with CMV each year, roughly 10-15 percent are at risk for developing hearing loss.

The multicenter research project, led by UAB researchers Suresh Boppana, M.D., and Karen Fowler, Dr.P.H., was seeking to find the most effective screening test for CMV infection in newborns. In an earlier study, the scientists had concluded that a dried blood spot, such as that taken using the common heel stick technique, detected only 30-40 percent of babies with CMV infection, and was therefore not an effective screening tool. A screening method should have at least 95 percent accuracy, or sensitivity, in order to be considered effective.

Nearly 35,000 infants in the well baby nurseries of seven U.S. hospitals were enrolled in the study between June 2008 and November 2009. Mouth swabs were taken when the infants were roughly 1 day old; the swabs were sent to UAB for testing. For the initial phase of the trial, the saliva samples were stored in solution; for the second phase, the swabs were air dried.

To conduct the screening, the researchers used a high-throughput molecular diagnostic procedure called real-time polymerase chain reaction (PCR) analysis and compared their results to the standard method for detecting CMV infection in newborns, known as the rapid culture method. Rapid culture, though highly accurate, involves a lengthy incubation and testing procedure, and is therefore not conducive to a widespread screening program.

With the PCR procedure, DNA from a sample is broken down into two separate strands. A special molecule, called a primer, seeks out a characteristic piece of CMV DNA and, if it is present, causes it to multiply and glow so it can be easily detected. To reduce the number of false positives, any babies who tested positive for CMV infection were retested using additional PCR and rapid culture tests. In addition, samples were tested directly without having to extract DNA, thereby saving considerable time and expense.

Of the infants enrolled in phase one, 85 infants were found to have CMV infection through both the rapid culture method and the PCR method; therefore, the sensitivity of PCR liquid samples was 100 percent. Of those newborns in phase two, saliva rapid culture identified CMV infection in 76 infants, 74 of which were identified with the saliva PCR; therefore, sensitivity of PCR dried samples was 97.4 percent. The researchers contend that the dry samples may be the best option for widescale screening, because this method has high sensitivity plus it is more efficient in terms of sample collection, storage, and transport.

Sixteen additional samples were found to test positive for the saliva PCR samples but not for the saliva rapid culture. Follow-up testing revealed that three of these samples were indeed positive, leading the researchers to conclude that PCR may be a superior method to rapid culture for CMV screening. As for the remaining 13 samples, the researchers noted that CMV may have been present in the mother’s breast milk or secretions in the birth canal, which showed up in the baby’s mouth swab. For this reason, they suggest that all positive screenings be confirmed with follow-up testing within the first three weeks of age.

"We now know that we have a test with saliva that works," said Dr. Boppana. "The challenge is, unlike the dried blood spot, which is already used for newborn screening in hospitals across the country, we don’t have a system in place for the collection of saliva. But we’ve shown that if you wanted to test a lot of babies for congenital CMV infection, it can be done."

The researchers are now looking to find out how much congenital CMV infection contributes to overall hearing loss at birth and between the ages of 3 1/2 to 4 years old. For this reason, infants who tested positive for CMV infection in the study are being enrolled in a follow-up program to monitor their hearing every six months until they are four years of age.

NIDCD supports and conducts research and research training on the normal and disordered processes of hearing, balance, smell, taste, voice, speech and language and provides health information, based upon scientific discovery, to the public. For more information about NIDCD programs, see the Web site at www.nidcd.nih.gov. 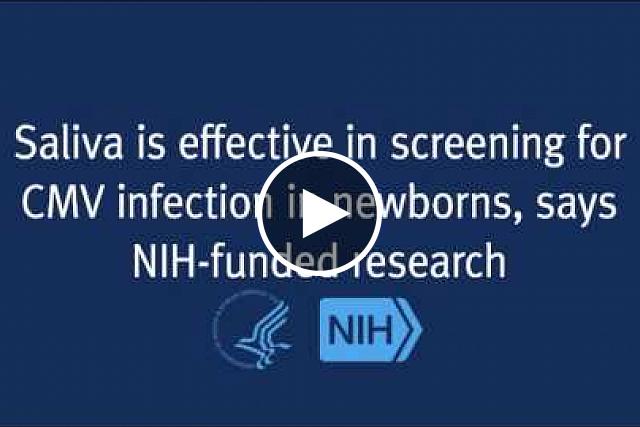 Researchers have been trying to find a simple, effective way to screen newborns for congenital cytomegalovirus (CMV) infection, a leading cause of hearing loss in children. Although a 2010 JAMA study by the same authors concluded that the heel stick test was not effective, this study shows that a saliva test is.