The brains of infants who die of sudden infant death syndrome (SIDS) produce low levels of serotonin, a brain chemical that conveys messages between cells and plays a vital role in regulating breathing, heart rate, and sleep, reported researchers funded by the National Institutes of Health.

SIDS is the death of an infant before his or her first birthday that cannot be explained after a complete autopsy, an investigation of the scene and circumstances of the death, and a review of the medical history of the infant and of his or her family. According to the National Center for Health Statistics, SIDS is the third leading cause of infant death (http://www.cdc.gov/NCHS/data/nvsr/nvsr57/nvsr57_14.pdf), claiming more than 2,300 lives in 2006.

The researchers theorize that this newly discovered serotonin abnormality may reduce infants' capacity to respond to breathing challenges, such as low oxygen levels or high levels of carbon dioxide. These high levels may result from re-breathing exhaled carbon dioxide that accumulates in bedding while sleeping face down. The findings appear in the Feb. 3 issue of The Journal of the American Medical Association.

"We have known for many years that placing infants to sleep on their backs is the single most effective way to reduce the risk of SIDS," said Alan E. Guttmacher, M.D., acting director of the Eunice Kennedy Shriver National Institute of Child Health and Human Development (NICHD), the NIH institute that funded the research. "The current findings provide important clues to the biological basis of SIDS and may ultimately lead to ways to identify infants most at risk as well as additional strategies for reducing the risk of SIDS for all infants."

NICHD's Back to Sleep (http://nichd.nih.gov/sids/) campaign urges parents and caregivers to place infants to sleep on their backs. Following the campaign's launch in 1994, the rate of SIDS dropped by more than 50 percent. Widespread adoption of back sleeping appears to have reduced the occurrence of SIDS, but has not eliminated it.

In earlier work comparing SIDS cases with other infant deaths (http://www.nichd.nih.gov/news/releases/sids_serotonin.cfm), Kinney and her coauthors showed that the brains of infants who died of SIDS had higher concentrations of cells that use serotonin in the medulla oblongata, a region of the brain stem. For the current study, the researchers set out to see if this meant the SIDS infants’ brains in fact had altered levels of the brain chemical.

This abnormality appears to fit into the triple-risk model of SIDS, which holds that SIDS occurs only when three elements come together: an infant with an underlying vulnerability, a critical period of development, and an external stressor. The researchers speculate in this case that the low serotonin level would cause the underlying vulnerability. The first year of life is the critical period of development for stabilizing vital functions such as breathing. The final element of the model, sleeping face down, might provide the external stressor.

"Our research suggests that sleep unmasks the brain defect," Dr. Kinney said. "When the infant is breathing in the face-down position, he or she may not get enough oxygen. An infant with a normal brainstem would turn his or her head and wake up in response. But a baby with an intrinsic abnormality is unable to respond to the stressor."

"It's no one single factor but a culmination of abnormalities that result in the death," Dr. Kinney said. In fact, in 88 percent of the SIDS cases they examined, the researchers found two or more risk factors, such as the infant's sleep position, an illness, or exposure to cigarette smoke.

Kinney hopes these findings will one day lead to a test that measures infants’ serotonin levels in the blood or other tissues that reflect brain serotonin levels. Such a test might make it possible to identify those at the highest risk for SIDS so that additional steps could be taken to protect them. In the near term, the findings will provide the basis for the development of animal models with serotonin deficiencies, to mimic what occurs in SIDS in human beings.

Information on reducing the risk of Sudden Infant Death Syndrome is available on the NICHD Web site (http://www.nichd.nih.gov/health/topics/Sudden_Infant_Death_Syndrome.cfm). 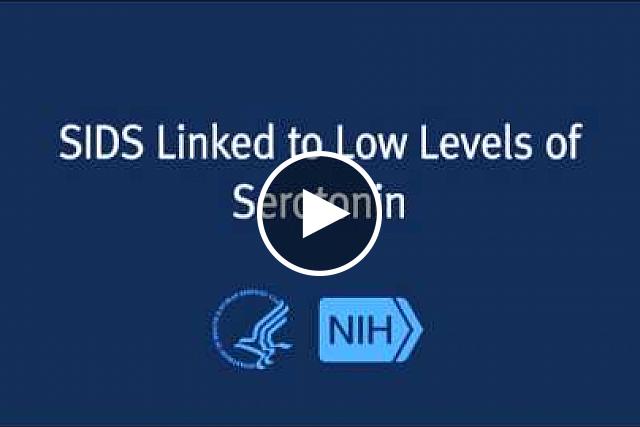 The brains of infants who die of sudden infant death syndrome (SIDS) produce low levels of serotonin, a brain chemical that conveys messages between cells and plays a vital role in regulating breathing, heart rate, and sleep, reported researchers funded by the National Institutes of Health.