Four people with paraplegia are able to voluntarily move previously paralyzed muscles as a result of a novel therapy that involves electrical stimulation of the spinal cord, according to a study funded in part by the National Institutes of Health and the Christopher & Dana Reeve Foundation. The participants, each of whom had been paralyzed for more than two years, were able to voluntarily flex their toes, ankles, and knees while the stimulator was active, and the movements were enhanced over time when combined with physical rehabilitation. Researchers involved in the study say the therapy has the potential to change the prognosis of people with paralysis even years after injury.

“When we first learned that a patient had regained voluntary control as a result of spinal stimulation, we were cautiously optimistic,” said Roderic Pettigrew, Ph.D., M.D., director of the National Institute of Biomedical Imaging and Bioengineering (NIBIB) at NIH, which provided support for the study. “Now that spinal stimulation has been successful in 4 out of 4 patients, there is evidence to suggest that a large cohort of individuals, previously with little realistic hope of any meaningful recovery from spinal cord injury, may benefit from this intervention.”

One of the most impressive and unexpected findings of the study is that two of the patients who benefited from the spinal stimulation had complete motor andsensory paralysis. In these patients, the pathway that sends information about sensation from the legs to the brain is disrupted, in addition to the pathway that sends information from the brain to the legs in order to control movement. The researchers were surprised by the outcome; they had assumed that at least some of the sensory pathway needed to be intact for the therapy to be effective.

Study participant Kent Stephenson voluntarily raises his leg while his spinal stimulator is active. Photo courtesy of the University of Louisville.

The study is the continuation of a groundbreaking pilot trial initiated in 2009 to determine whether spinal stimulation, in conjunction with daily training on a treadmill, could help patients with paralysis regain some ability to move. In that trial, Rob Summers, a young man paralyzed below his chest, had a 16-electrode array implanted on his spinal cord. He then underwent daily training in which he was suspended in a harness over a treadmill while a team of researchers supported his legs, helping him to either stand or walk. At the same time, the array delivered electrical pulses to his spinal cord just below his injury.

According to the researchers, the goal of the stimulation was to increase the sensitivity of local circuits within the spinal cord that carry out basic motor functions without input from the brain—such as the knee jerk that occurs after stepping on a tack, or even more complex patterned movements like stepping. While not strong enough to directly induce muscle activation by itself, the researchers believed the stimulation could lead to movement when combined with sensory input from stepping on a treadmill.

With his stimulator active, Summers was able to gradually bear his own weight and could eventually stand without assistance from physical therapists for up to four minutes. Surprisingly, seven months into the trial, Summers also discovered that he had regained some voluntary control of his legs. The researchers were amazed by this latter outcome, as intentional movement requires information to travel from the brain down to the lower spinal cord, a path that had been rendered nonfunctional by his injury. Other impairments caused by Summers’ injury also began to improve over time, in the absence of stimulation, such as blood pressure control, body temperature regulation, bladder control, and sexual function.

Now, in this follow-up study, Claudia Angeli, Ph.D., assistant professor at the University of Louisville’s Kentucky Spinal Cord Injury Research Center and her research colleagues report that three additional patients with paralysis have recovered voluntary muscle control following electrical stimulation of the spine. Their report, which also includes results from new tests conducted on Summers, was published in the April 8 online issue of Brain.

The first person they implanted after Summers was unable to move or experience any sensation below his injury and was initially meant to be their baseline patient. “What was astounding about him was that not only was there voluntary movement, but we saw it in the first week of stimulation. We then saw it in the next two patients as well,” said Susan Harkema, Ph.D., the director of rehabilitation research at the Kentucky Spinal Cord Injury Research Center at the University of Louisville, and a researcher in the study.

The researchers point to the speed at which each subject recovered voluntary movement as evidence that there may be dormant connections that exist in patients with complete motor paralysis. “Rather than there being a complete separation of the upper and lower regions relative to the injury, it’s possible that there is some contact, but that these connections are not functional,” said V. Reggie Edgerton, Ph.D., a UCLA distinguished professor of integrative biology and physiology, and the researcher responsible for developing the novel approach to rehabilitation. “The spinal stimulation could be reawakening these connections.”

An important aspect of the new study involved assessing the ability of each patient to modulate his movements in response to auditory and visual cues. "We hoped to determine if they could voluntarily move in the presence of stimulation, and also how controlled they could be about their movements," said Angeli.

All participants, including Summers, were able to synchronize leg, ankle, and toe movements in unison with the rise and fall of a wave displayed on a computer screen, and three out of the four were able to change the force at which they flexed their leg, depending on the intensity of three different auditory cues.

Study participant Kent Stephenson does voluntary training while undergoing spinal stimulation. Katelyn Gurley tracks his level of muscle activity and force.University of Louisville
“The fact that the brain is able to take advantage of the few connections that may be remaining, and then process this complicated visual, auditory, and perceptual information, is pretty amazing. It tells us that the information from the brain is getting to the right place in the spinal cord, so that the person can control, with fairly impressive accuracy, the nature of the movement,” said Edgerton.

The same tests were also administered following several months of spinal stimulation applied in conjunction with locomotor training. During this time, patients also carried out home-based training, which consisted of hour-long stimulation while practicing intentional movements lying down. At the end of the training, some subjects were able to execute voluntary movements with greater force and with reduced stimulation, while others experienced enhanced movement accuracy. Harkema says it’s unclear whether the improvement was a result of the training or due to the cumulative effects of stimulation over time. They plan to test this distinction in their next study.

“With this study the investigators show that their findings about a motor complete patient regaining movement, reported three years ago in The Lancet, were not an anomaly,” said Susan Howley, executive vice president for research at the Christopher & Dana Reeve Foundation, Short Hills, N.J., which provides patient advocacy and funding for spinal cord injury research. “The implications of this study for the entire field are quite profound and we can now envision a day where epidural stimulation might be part of a cocktail of therapies used to treat paralysis.”

With support from NIBIB, Edgerton, along with collaborators Joel Burdick and Y.C. Tai, professors of mechanical and electrical engineering and bioengineering at Caltech, are also working to develop a new high-density, 27-electrode array in rats to determine if it can provide finer, more robust control of locomotion.

“The technology we used in these four individuals was initially designed for the suppression of back pain, and our animal experiments have told us that we can do much better,” said Edgerton. “For a given type of movement, we want to be able to select exactly where and how to stimulate the spinal cord. We just don’t have that flexibility in the current technology.”

Edgerton is also working with various collaborators on NIBIB-funded projects to explore whether epidural stimulation can be used to help patients with paralysis of the upper limbs. They are also developing a technology that can deliver spinal stimulation through the skin (transcutaneously), which would bypass the need for surgical implantation.

Though there is much work to be done, Harkema believes the results from this newest study already provide enough evidence to challenge currently held beliefs about the prognosis of patients with severe spinal cord injuries.

“Right now, the clinical perspective for individuals with complete motor paralysis is that there is nothing we can do,” said Harkema “I think we need to rethink that. In our study, we demonstrated potential beyond any expectation. We need to relook at what the perceived potential is for this group of individuals.”

“This is a wake-up call for how we see motor complete spinal cord injury,” said Edgerton. “We don’t have to necessarily rely on regrowth of nerves in order to regain function. The fact that we’ve observed this in all four patients suggests that this is actually a common phenomenon in those with complete paralysis.”

NIBIB’s mission is to improve health by leading the development and accelerating the application of biomedical technologies. The Institute is committed to integrating the physical and engineering sciences with the life sciences to advance basic research and medical care. NIBIB supports emerging technology research and development within its internal laboratories and through grants, collaborations, and training. More information is available at the NIBIB website: http://www.nibib.nih.gov.

NIGMS’ mission is to support basic research to increase our understanding of life processes and lay the foundation for advances in disease diagnosis, treatment and prevention. For more information on the institute's research and training programs, see http://www.nigms.nih.gov. 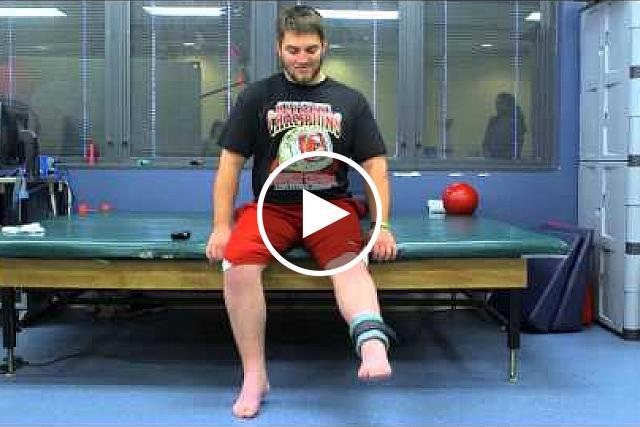 In the first segment of the video, study participant Kent Stephenson does voluntary training with spinal stimulation.