Statement of Anthony S. Fauci, M.D., and Jack Whitescarver, Ph.D., National Institutes of Health, on the 30th anniversary of the first reported cases of AIDS

On June 5, 1981, an article concerning five previously healthy, young gay men in Los Angeles diagnosed with Pneumocystis carinii pneumonia, an infection that usually appears only in individuals with substantial immune system damage, appeared in the Morbidity and Mortality Weekly Report, a publication of the Centers for Disease Control and Prevention.

Soon more cases like these appeared, at first mainly in gay men, but then also in injection drug users, hemophiliacs and other recipients of blood and blood products, heterosexual men and women, and babies who acquired the infection from their mothers during birth or breastfeeding. We and our colleagues quickly began to confront the reality of a deadly new disease that would change the world. The disease ultimately would be referred to as AIDS.

Thirty years later, we are gratified by the progress that has been made in understanding, treating and preventing HIV/AIDS. We could not have imagined these advances during the early days of AIDS, when all we could do was provide palliative care to waves of dying patients. Whereas survival was once measured in weeks or months from the time of diagnosis, today, the critical discovery of antiretroviral drugs and their use in combination regimens has resulted in greatly improved life expectancy—decades, rather than months—for many HIV-infected people who have access to these medicines and adhere to treatment.

We take pride in the contributions of NIH-supported scientists who have been central to the investigation of the HIV disease process, the development of new therapies for HIV/AIDS and the design and validation of methods of HIV prevention. NIH scientists played a key role in demonstrating that HIV causes AIDS and in developing a diagnostic test for the virus. The ability to test the blood supply for HIV has nearly eliminated the risk of HIV transmission through blood transfusion.

NIH has supported basic and clinical research that provided pivotal data for many of the more than 30 drugs that have been approved by the Food and Drug Administration to treat HIV infection, as well as for strategies to address its associated opportunistic infections, malignancies and clinical complications. Clinical trials funded by NIH also have helped determine the most effective combinations of these drugs to slow or halt the progression of HIV disease. Additionally, NIH-supported studies were instrumental in designing effective strategies to virtually eliminate mother-to-child HIV transmission in developed nations and to dramatically reduce HIV transmission from an infected mother to her newborn or nursing child in the developing world. Many of these clinical trials were designed with the involvement and advice of HIV-affected communities, establishing a model for the conduct of clinical trials for other diseases.

NIH-supported, large-scale clinical trials have resulted in other notable achievements in HIV prevention. These studies sought answers to questions of critical importance to the global public health community. They proved that medically supervised adult male circumcision more than halves the risk of female-to-male sexual HIV transmission; that needle and syringe exchange programs can reduce HIV transmission without increasing injection drug use; that a vaccine can achieve modest protection against HIV infection; and that taking an antiretroviral drug daily can reduce the risk of HIV acquisition in men who have sex with men.

Most recently, an NIH-funded clinical trial demonstrated that an HIV-infected individual can dramatically reduce the risk of transmitting the virus to an uninfected heterosexual partner by starting treatment when his or her immune system is relatively healthy. NIH also helped train the scientists and establish the infrastructure for an important clinical trial funded by the U.S. Agency for International Development showing that a vaginal gel containing an anti-HIV drug can help protect women from HIV infection. These multiple achievements are important because it is clear that controlling—and ultimately ending—the HIV/AIDS pandemic will require a combination of scientifically proven HIV prevention tools.

As gratified as we are by these accomplishments, we are sobered by some grim realities and remaining challenges. Despite the global public health community’s best efforts to prevent new infections, 2.6 million people around the world became newly infected with HIV in 2009 alone. In developing nations, only about one-third of the 15 million people who need anti-HIV drugs have access to them. In addition, a growing proportion of patients receiving long-term antiretroviral therapy are experiencing treatment failure, drug toxicities, side effects and drug resistance. In this regard, recent studies have noted an increased incidence of malignancies, cardiovascular and metabolic complications and premature aging associated with long-term HIV disease or antiretroviral therapy.

NIH research will continue to address these issues as well as the causes of HIV-related health disparities, their role in disease transmission and acquisition, and their impact on treatment access and effectiveness. These include disparities among racial and ethnic populations in the United States; disparities between developed and resource-constrained nations, and disparities based on gender, age, or sexual identity. NIH research also will continue to play a critical role in providing the scientific foundation to achieve the goals of the President’s National HIV/AIDS Strategy. Among the important scientific challenges that remain are the development of a safe and effective vaccine that can take its place among the combination of prevention tools as well as the possibility of curing at least a proportion of HIV-infected individuals.

The HIV/AIDS pandemic will remain one of the most serious public health crises of our time until better, more effective and affordable prevention and treatment regimens are developed and universally available. As the single largest public funder of HIV/AIDS research in the world, NIH is committed to advancing a comprehensive program of basic, clinical, translational and behavioral and social science research toward controlling and ultimately ending this modern plague. In memory of the patients, friends, loved ones and colleagues we have lost over these three decades, we wholeheartedly embrace this responsibility and opportunity knowing that history will judge us as much for what we accomplish during the coming years as for what we have achieved thus far.

NIAID conducts and supports research—at NIH, throughout the United States, and worldwide—to study the causes of infectious and immune-mediated diseases, and to develop better means of preventing, diagnosing and treating these illnesses. News releases, fact sheets and other NIAID-related materials are available on the NIAID Web site at http://www.niaid.nih.gov/.

The Office of AIDS Research, a part of the Office of the NIH Director, coordinates the scientific, budgetary, legislative, and policy elements of the NIH AIDS research program. OAR sets scientific priorities, enhances collaboration, and ensures that research dollars are invested in the highest priority areas of scientific opportunity that will lead to new tools in the global fight against AIDS. 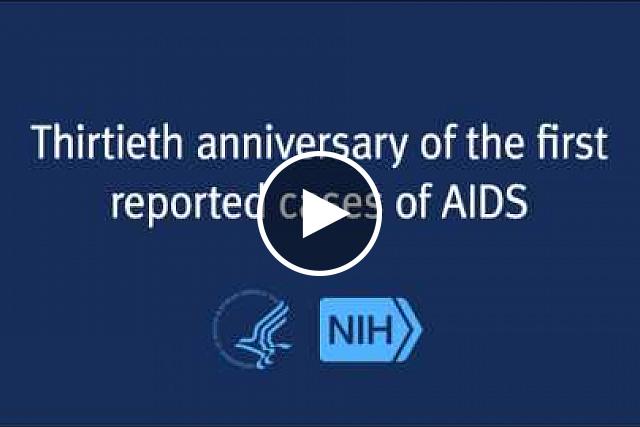 It has been 30 years since the appearance of an article concerning five previously healthy, young gay men in Los Angeles diagnosed with an infection that usually appears only in individuals with substantial immune system damage. The disease ultimately would be referred to as AIDS.