Succimer, a drug used for treating lead poisoning, does not effectively remove mercury from the body, according to research supported by the National Institutes of Health. Some families have turned to succimer as an alternative therapy for treating autism.

"Succimer is effective for treating children with lead poisoning, but it does not work very well for mercury," said Walter Rogan, M.D., head of the Pediatric Epidemiology Group at the National Institute of Environmental Health Sciences (NIEHS), part of NIH, and an author on the paper that appears online in the Journal of Pediatrics.

"Although it is not approved by the Food and Drug Administration to reduce mercury, succimer is reportedly being used for conditions like autism, in the belief that these conditions are caused, in part, by mercury poisoning," Rogan stated. "Our new data offers little support for this practice."

Although researchers found that succimer lowered blood concentrations of mercury after one week, continued therapy for five months only slowed the rate at which the children accumulated mercury. The safety of higher doses and longer courses of treatment has not been studied.

Most mercury exposure in the United States is from methylmercury, found in foods such as certain fish. Thimerosal, a preservative once more commonly used in vaccines, contains another form of mercury, called ethylmercury.

To conduct the study, the researchers used samples and data from an earlier clinical trial, led by NIEHS, called the Treatment of Lead-exposed Children (TLC) trial. In the TLC study, succimer lowered blood lead in 2-year-old children with moderate to high blood lead concentrations.

Using blood samples from 767 children who participated in the TLC trial, the researchers measured mercury concentration in the toddlers’ blood samples collected before treatment began, one week after beginning treatment with succimer or placebo, and then again after three month-long courses of treatment. Mercury concentrations were similar in all children before treatment. Concentrations eventually increased in both groups, but more slowly in the children given succimer. Succimer had produced a 42 percent difference in blood lead, but only an 18 percent difference in blood mercury.

"Although succimer may slow the increase in blood mercury concentrations, such small changes seem unlikely to produce any clinical benefit," Rogan said. He and his colleagues had reported in an earlier paper that succimer has few adverse side effects, mostly rashes, and an unexplained increase in injuries in children given succimer rather than placebo.

"This research fills a gap in the scientific literature that could not be addressed any other way. We were fortunate to have samples already collected from toddlers who had been treated with succimer for lead poisoning allowing us to help answer this important question," said Linda Birnbaum, Ph.D., director of NIEHS and the National Toxicology Program.

Birnbaum noted NIH's commitment to supporting research that provides critically needed information that will help drive more prevention and treatment options for children with autism and other neurodevelopmental disorders.

The study was supported by the NIEHS Intramural Research Program, the National Institute for Minority Health and Health Disparities at NIH, and the National Center for Environmental Health at the Centers for Disease Control and Prevention. The succimer, Chemet, and the placebo, were gifts from McNeil Laboratories, Fort Washington, Pa.

The NIEHS supports research to understand the effects of the environment on human health and is part of NIH. For more information on environmental health topics, visit www.niehs.nih.gov. Subscribe to one or more of the NIEHS news lists (www.niehs.nih.gov/news/releases/newslist/index.cfm) to stay current on NIEHS news, press releases, grant opportunities, training, events, and publications. 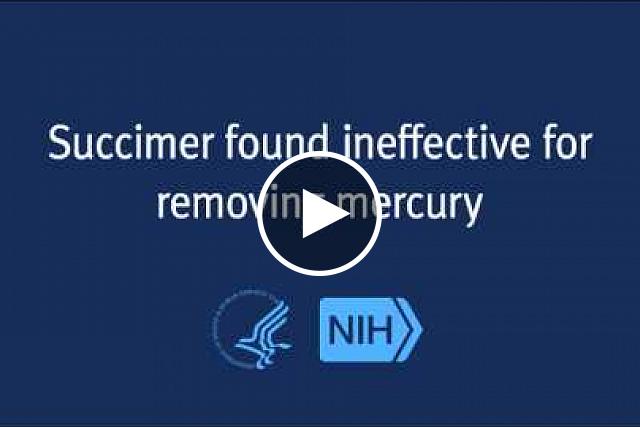 Some families have turned to a drug used for treating lead poisoning as an alternative therapy for treating autism. NIH researchers say new data offers little support for this practice.