Training peers improves social outcomes for some kids with ASD

Children with autism spectrum disorder (ASD) who attend regular education classes may be more likely to improve their social skills if their typically developing peers are taught how to interact with them than if only the children with ASD are taught such skills. According to a study funded by the National Institutes of Health, a shift away from more commonly used interventions that focus on training children with ASD directly may provide greater social benefits for children with ASD. The study was published online ahead of print on November 30, 2011, in the Journal of Child Psychology and Psychiatry.

"Real life doesn't happen in a lab, but few research studies reflect that," said Thomas R. Insel, director of the National Institute of Mental Health (NIMH), a part of NIH. "As this study shows, taking into account a person's typical environment may improve treatment outcomes."

The most common type of social skills intervention for children with ASD is direct training of a group of children with social challenges, who may have different disorders and may be from different classes or schools. The intervention is usually delivered at a clinic, but may also be school-based and offered in a one-on-one format. Other types of intervention focus on training peers how to interact with classmates who have difficulty with social skills. Both types of intervention have shown positive results in studies, but neither has been shown to be as effective in community settings.

Connie Kasari, Ph.D., of the University of California, Los Angeles, and colleagues compared different interventions among 60 children, ages 6-11, with ASD. All of the children were mainstreamed in regular education classrooms for at least 80 percent of the school day.

All interventions were given for 20 minutes two times a week for six weeks. A follow-up was conducted 12 weeks after the end of the study. After the follow up phase, all children with ASD who had received neither intervention were re-randomized to one of the other treatment categories.

At follow-up, children with ASD from the peer-mediated groups continued to show increased social connections despite some of the children having changed classrooms due to a new school year and having new, different peers.

In addition to the benefits of peer-mediated interventions, the researchers noted several areas for improvement. For example, peer engagement especially helped children with ASD to be less isolated on the playground, but it did not result in improvement across all areas of playground behavior, such as taking turns in games or engaging in conversations and other joint activities. Also, despite greater inclusion in social circles and more frequent engagement by their peers, children with ASD continued to cite few friendships. Further studies are needed to explore these factors as well as other possible mediators of treatment effects.

The mission of the NIMH is to transform the understanding and treatment of mental illnesses through basic and clinical research, paving the way for prevention, recovery and cure. For more information, visit the NIMH website. 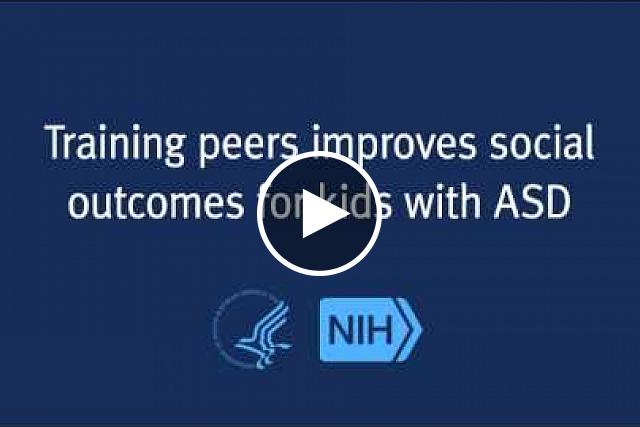