Taking vitamin C and E supplements starting in early pregnancy does not reduce the risk for the hypertensive disorders and their complications that occur during pregnancy, according to a study by a National Institutes of Health research network.

The NIH study, the largest to date and one in which treatment was started earliest in pregnancy, also showed no reduction in pregnancy-associated hypertension and its complications.

"The study results effectively rule out vitamin C and E supplements as a means to prevent the hypertensive disorders seen in pregnancy," said Alan E. Guttmacher, M.D., acting director of the Eunice Kennedy Shriver National Institute of Child Health and Human Development (NICHD), one of the NIH Institutes that provided funding for the study.

The findings appear in the April 8 issue of the New England Journal of Medicine.

The study was conducted at 16 sites within the NICHD’s Maternal–Fetal Medicine Units (MFMU) Network. The article’s first author was James M. Roberts, M.D., of the Departments of Obstetrics and Gynecology, University of Pittsburgh.

The study included only women giving birth for the first time, a group at higher risk for developing hypertensive disorders of pregnancy. In general, the women were healthy and did not have high blood pressure, protein in the urine (an indication of stress on the kidneys), or gestational diabetes (a form of diabetes that emerges in pregnancy). The researchers enrolled over 10,000 women, starting in the ninth to 16th weeks of pregnancy, and followed them to delivery. The women also received daily supplements of vitamins C and E or a placebo.

"In the United States, obstetricians generally recommend that pregnant women take a multivitamin formulated for pregnancy, especially if they aren’t eating a well-balanced diet," said study co-author Catherine Y. Spong, M.D., chief of NICHD’s Pregnancy & Perinatology Branch and program scientist for the MFMU Network. "In our study, participants took supplements containing higher doses of vitamins C and E — about 10 times the amount in typical prenatal vitamins — in addition to any pregnancy vitamins they may have been taking."

Based on earlier studies, researchers theorized that vitamins C and E might reduce the chances of preeclampsia by preventing damage from molecules known as free radicals — byproducts of the body's use of oxygen. The theory held that free radicals could prevent the placenta from developing properly and interfere with blood flow from the mother to the baby. Although the current findings neither support nor contradict the idea that free radical damage can lead to preeclampsia, Dr. Spong said, they do show that treatment with vitamins C and E will not prevent the condition.

The combined rates of pregnancy-associated hypertension, seizure, protein in the urine, preeclampsia, blood or liver abnormalities, loss of the pregnancy, an underweight baby and preterm delivery did not differ statistically between the two groups. The combined rate of complications was 6.1 percent among those taking the study vitamins and 5.7 percent of those taking the placebo.

Moreover, the study did not detect any statistical difference in preeclampsia between the two groups: 7.2 percent among women taking vitamins versus 6.7 percent among those who took the placebo.

Dr. Spong added that the results are welcome for the clarity they provide.

"These results are very useful," Dr. Spong said. "In this case, it shows us that what originally appeared to be a promising treatment did not actually offer any benefit clinically."

To arrange an interview with Dr. Spong, please call Robert Bock or Marianne Glass Miller at 301-496-5133.

To interview an NHLBI expert, contact the NHLBI Communications Office at 301 496-4236 or at NHLBI_news@nhlbi.nih.gov.

Part of the National Institutes of Health, the National Heart, Lung, and Blood Institute (NHLBI) plans, conducts, and supports research related to the causes, prevention, diagnosis, and treatment of heart, blood vessel, lung, and blood diseases; and sleep disorders. The Institute also administers national health education campaigns on women and heart disease, healthy weight for children, and other topics. NHLBI press releases and other materials are available online at www.nhlbi.nih.gov. 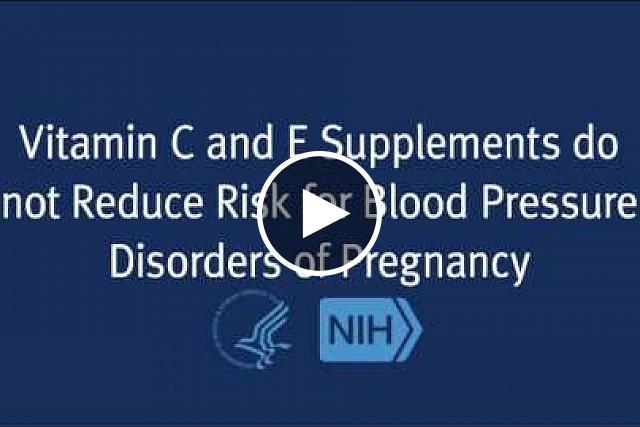 In a NIH study researchers found that by taking vitamin C and E supplements starting in early pregnancy does not reduce the risk for the hypertensive disorders and their complications that occur during pregnancy.