Young women with menopause-like condition at risk for depression

Young women with the menopause-like condition, primary ovarian insufficiency, are much more likely than other women to experience depression at some point during their lives, according to a study from the National Institutes of Health. The finding suggests that all women diagnosed with the condition should be evaluated for depression.

Depression (http://www.nlm.nih.gov/medlineplus/depression.html) is a serious medical illness affecting the brain which involves more than feeling blue or sad for a few days. Symptoms include persistent feelings of sadness, difficulty sleeping or over sleeping, energy loss, and feelings of worthlessness.

Primary ovarian insufficiency, or POI (http://poi.nichd.nih.gov), results in a menopause-like condition years before normal menopause begins — sometimes as early as the teens or twenties. Women with POI stop producing normal amounts of reproductive hormones, develop hot flashes, and typically become infertile. The study authors evaluated 174 women with POI and found that 67 percent either were currently clinically depressed or had been depressed at least one time in their lives.

The researchers noted that this proportion was more than twice the rate of depression found by a national survey of women in the general population.

"Because of the strong association with depression, our results indicate all women diagnosed with POI should be thoroughly evaluated for depression," said Lawrence M. Nelson, M.D., co-senior author of the study and head of the Integrative and Reproductive Medicine Group at the NIH’s Eunice Kennedy Shriver National Institute of Child Health and Human Development (NICHD). "Simply asking patients if they are depressed is not sufficient. Primary care physicians should evaluate their patients with a diagnostic screening test to determine if treatment or referral to a mental health specialist for further evaluation is needed."

The study appears in The Journal of Clinical Endocrinology and Metabolism.

Over a period of nearly five years, the researchers asked 174 women with POI to respond to a standard set of interview questions on past or current incidents of major, minor, or long-term depression. The women also were asked when they were diagnosed with POI and when they first noticed the pattern of irregular menstrual cycles believed to signal the onset of POI.

The study was unable to determine why women with POI are more likely than other women to experience depression. The investigators cited results of a previous study, which had suggested that depression might trigger physical changes that ultimately lead women to develop POI. However, in the current study, more than 73 percent of women with POI first experienced depressive symptoms after developing the irregular menstrual cycles believed to be an indicator of impending POI.

The findings also did not support the hypothesis that most women with POI become depressed after they are told of their diagnosis, when they learn that they will likely be infertile. In the current study, more than 68 percent of patients with POI who had depression had become depressed after the onset of irregular menstrual cycles, but before receiving the diagnosis of POI.

In a previous study, Dr. Schmidt found that women entering natural menopause at an appropriate age are at greater risk of depression late in the menopause transition, when estrogen levels are particularly low.

"Future studies are needed to help determine whether hormonal changes, perhaps combined with a particular genetic makeup, might predispose some women to depression," said Dr. Schmidt.

NIMH provides information about women and depression in its booklet Women and Depression: Discovering Hope (http://www.nimh.nih.gov/health/publications/women-and-depression-discovering-hope/index.shtml).

The NICHD sponsors research on development, before and after birth; maternal, child, and family health; reproductive biology and population issues; and medical rehabilitation. For more information, visit the Institute's Web site at http://www.nichd.nih.gov/.

The mission of the NIMH is to transform the understanding and treatment of mental illnesses through basic and clinical research, paving the way for prevention, recovery and cure. For more information, visit the NIMH website, http://www.nimh.nih.gov/index.shtml. 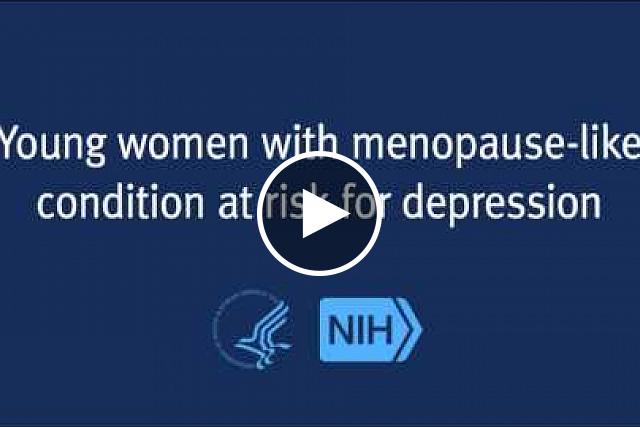 Young women with the menopause-like condition, primary ovarian insufficiency, are much more likely than other women to experience depression at some point during their lives, according to a study from the National Institutes of Health. The finding suggests that all women diagnosed with the condition should be evaluated for depression.