How ketamine relieves symptoms of depression

Closeup view of three dendrites with spines, which are responsible for receiving input from other nerve cells. Conor Liston, Science

Depression is a serious mood disorder with symptoms that include prolonged periods of sadness, hopelessness, and irritability. The symptoms can affect how you feel, think, and handle daily activities. Depression is usually treated with medications, psychotherapy, or a combination.

Earlier this year, the FDA approved a form of the drug ketamine to treat depression. Ketamine is a fast-acting antidepressant that relieves depressive symptoms in hours instead of the weeks or longer that previous drugs required. In addition to being a major advance in treatment, ketamine provides an opportunity for researchers to investigate the short- and long-term biological changes underlying its effects on depression.

A research team led by Dr. Conor Liston of Weill Cornell Medicine investigated how ketamine affects the brain after mice experience chronic stress. They used high-resolution imaging to focus on neurons in the prefrontal cortex. The study was funded in part by NIH’s National Institute of Mental Health (NIMH). Results were published in Science on April 12, 2019.

The researchers examined neurons in the prefrontal cortex of mice exposed to long-term stress. They found that mice showing behaviors related to depression had an increased loss of, and decreased formation of, dendritic spines in their prefrontal cortex compared with mice not exposed to stress. 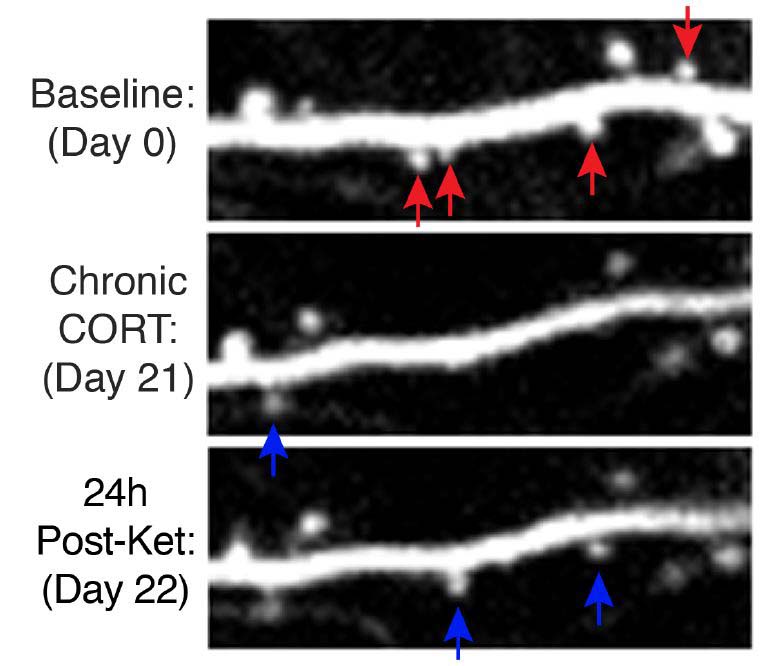 Treatment with ketamine rapidly relieved the abnormal behaviors in the stressed mice. The drug also quickly restored the coordinated activity of prefrontal neural circuits that were disrupted by chronic stress. However, the researchers found that ketamine didn’t work by halting the stress-induced spine loss. Instead, the drug led to formation of new functional spines.

The initial effects of ketamine on mouse behavior occurred independently of its effects on spine formation. While the drug affected behavior within three hours, formation of the new spines took 12 to 24 hours. Formation of spines in the mice correlated with their behavior two to seven days after treatment. Further experiments showed that the newly formed spines were crucial for sustained reversal of the negative effects from stress. When the ketamine-induced spines were eliminated, the mice again showed depression-like behaviors.

These insights into ketamine’s effects on brain circuits could guide future advances in managing mood disorders. “Our results suggest that interventions aimed at enhancing synapse formation and prolonging their survival could be useful for maintaining the antidepressant effects of ketamine in the days and weeks after treatment,” Liston says.

How ketamine relieves symptoms of depression