Genome editing, also called gene editing, is an area of research seeking to modify genes of living organisms to improve our understanding of gene function and develop ways to use it to treat genetic or acquired diseases. Genome editing can be used to correct, introduce or delete almost any DNA sequence in many different types of cells and organisms. While techniques to modify DNA have existed for several decades, new methods have made genome editing faster, cheaper and more efficient. Genome editing builds on an earlier discovery that a broken section of DNA in a gene triggers a cell’s repair mechanism to stitch together the break. Genome editing allows researchers to mimic this natural process of DNA repair.

CRISPR/Cas9 is the most widely used genome editor and is a powerful tool for understanding gene function. Because CRISPR/Cas9 is an RNA-based system, it can be more efficiently and easily modified than the protein-based approaches and allows for targeting of multiple sites. CRISPR was discovered through NIH-funded basic research on how bacteria defend themselves from viruses. CRISPR/Cas9 works by cutting a DNA sequence at a specific genetic location and deleting or inserting DNA sequences, which can change a single base pair of DNA, large pieces of chromosomes, or regulation of gene expression levels.

Genome editing is widely used in studies in a variety of organisms. For example, CRISPR is used to make “knockout” models of disease in a wide range of animals, enabling researchers to study the underlying genetic causes. It also is being used to change genes in certain tissues or organs, facilitate the study of diseases by focusing on culprit genes, create cell models of disease such as in human pluripotent stem cells and inactivate viruses in pigs so that pig organs could potentially be used as a source of replacement organs for humans. It also is being explored to modify yeast cells to make biofuels and to improve strains of agricultural crops. Gene drive technology using CRISPR allows for the spread of engineered traits through populations of sexually reproducing organisms at a rate more rapid than what occurs in natural evolution. This research could be applied to alter mosquito populations to help interfere with the transmission of infectious diseases.

Genome Editing in the Clinic

NIH supports human gene therapy research, including genome editing approaches in somatic cells, for a wide array of diseases and conditions with grants, contracts and targeted efforts, such as the Somatic Cell Genome Editing Program. Somatic cells are any cells not involved in human reproduction. This means that changes in somatic cells are not inherited by subsequent generations. CRISPR and other gene editing methods, especially ZFNs, are speeding gene therapy approaches to treat many human conditions. In 2014, the first clinical application of genome editing involved the use of ZFNs to make human cells resistant to HIV-1 by disrupting a gene required for the virus to infect cells. In 2017, a clinical trial testing ZFNs to correct Hunter syndrome (MPS II) was launched. Caused by an enzyme deficiency, Hunter syndrome can cause abnormalities in the skeleton, heart and respiratory system.  The clinical trial was the first genome editing approach administered directly to research participants. TALENs are being studied in T cell immunotherapy approaches to create “off-the-shelf” universal donor T cells that don’t have to be developed for each cancer patient. Genome editing approaches are also being pursued as part of NIH’s Cure Sickle Cell Initiative, and CRISPR is being used as a diagnostic tool to detect viruses such as Zika and dengue.  In October 2019, NIH and the Bill and Melinda Gates Foundation announced a collaboration to support studies to advance the development of gene-based approaches to cure sickle cell disease and HIV.

Applications of genome editing have raised scientific, safety, ethical and policy concerns. NIH does not fund any use of genome editing in human embryos. The Dickey-Wicker amendment prohibits the use of Congressionally appropriated funds for the creation of human embryos for research purposes or for research in which human embryos are destroyed. Additionally, serious and unquantifiable safety and ethical issues presented by altering the germline in ways that affect the next generation without consent, and a current lack of compelling medical applications, do not justify the use of genome editing in embryos. In 2017, the National Academies of Science, Engineering, and Medicine (NASEM) issued a report, Human Genome Editing: Science, Ethics, and Governance (2017), which recommended that clinical trials using gene editing in embryos should be permitted only within a robust and effective regulatory framework and only when certain criteria are met. However, in November 2018, Chinese scientist He Jiankui announced that he had used the CRISPR/Cas9 technique to create the first genome edited babies, claiming to have disabled copies of a gene in the embryos to confer HIV resistance. This work raised serious questions of medical necessity, off-target effects and the potential for susceptibility to other infections. It led to nearly universal condemnation by the international scientific community, and the NIH Director issued a statement expressing serious concerns about the claim and urging continued international dialogue.  On March 14, 2019, the NIH Director issued a statement supporting the call for an international moratorium on research establishing human pregnancies using germline-edited embryos. NIH continues to be involved in ongoing efforts by the World Health Organization and sponsored a study of the NASEM/Royal Society of the United Kingdom to examine the issues associated with human gene editing and develop global governance and oversight approaches. As discussed in the Director’s blog, the international commission concluded in the report, Heritable Human Genome Editing (link is external) released in September 2020, that clinical use of heritable human gene editing should not be considered until it has been established that it is possible to make precise genomic changes efficiently and reliably without undesired changes in human embryos. If permitted, use should be limited to serious monogenic diseases. The report also included recommendations for scientific governance and oversight including the establishment of an international scientific advisory panel.

In many cases, the safety and bioethical concerns raised by the use of CRISPR/Cas9 in somatic gene therapy are like those first discussed at the emergence of recombinant DNA technology and human gene therapy. These concerns are well addressed in current oversight structures. For instance, in the United States, well-established oversight frameworks and the U.S. Food and Drug Administration’s (FDA) regulatory authority over human gene therapy trials would apply to clinical research involving genome editing of somatic cells in humans. Additionally, biosafety guidance for the conduct of genome editing research is provided by the NIH Guidelines for Research Involving Recombinant or Synthetic Nucleic Acid Molecules.

The potential effects of gene drives on individual species and the environment have also raised biosafety, biosecurity and ethical concerns. A NASEM report, Gene Drives on the Horizon: Advancing Science, Navigating Uncertainty, and Aligning Research with Public Values (2016), which was partially funded by NIH, explored the responsible conduct of gene drive research. In a 2016 statement by the NIH Director, NIH supported the report’s recommendations to continue basic and applied research on gene drives, hold off on current release of gene drive-modified organisms into the environment, have funders coordinate to encourage responsible development of gene drive technology and prioritize stakeholder engagement in decision-making.

While NIH can’t precisely quantify the amount of NIH funding that supported the development of CRISPR given its evolutionary development, it is hundreds of millions of dollars. Genome editing technology is being used widely as a research tool across NIH-funded projects and most NIH Institutes and Centers fund such research.

However, identifying precise levels of funding for a technique with so many uses is difficult. That is because searching the terms, “genome or gene editing,” “CRISPR,” etc., in NIH RePORTER, a database of NIH-funded research, is comparable to searching a term such as “DNA sequencing.” If used as a research tool, some researchers may mention it in their RePORTER entry, while others may not. Also, research that results from a search on the word “CRISPR” does not necessarily mean that CRISPR is used in the research. For example, a researcher may reference CRISPR in the RePORTER summary, but may not be using it in the research. 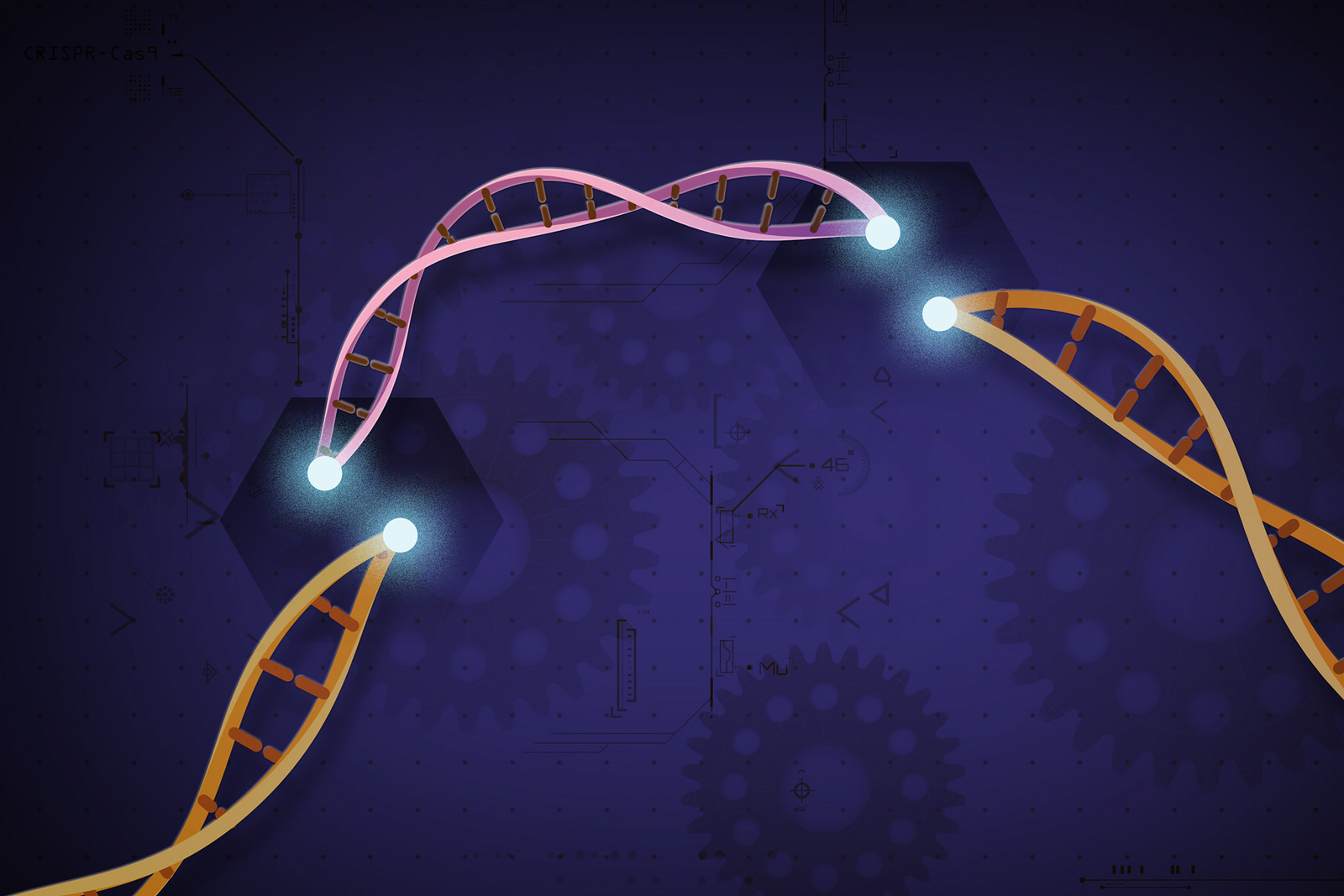 CRISPR-Cas9 is a customizable tool that lets scientists cut and insert small pieces of DNA at precise areas along a DNA strand. This lets scientists study our genes in a specific, targeted way.Ernesto del Aguila III, NHGRI.

CRISPR-Cas9 is a customizable tool that lets scientists cut and insert small pieces of DNA at precise areas along a DNA strand. This lets scientists study our genes in a specific, targeted way. 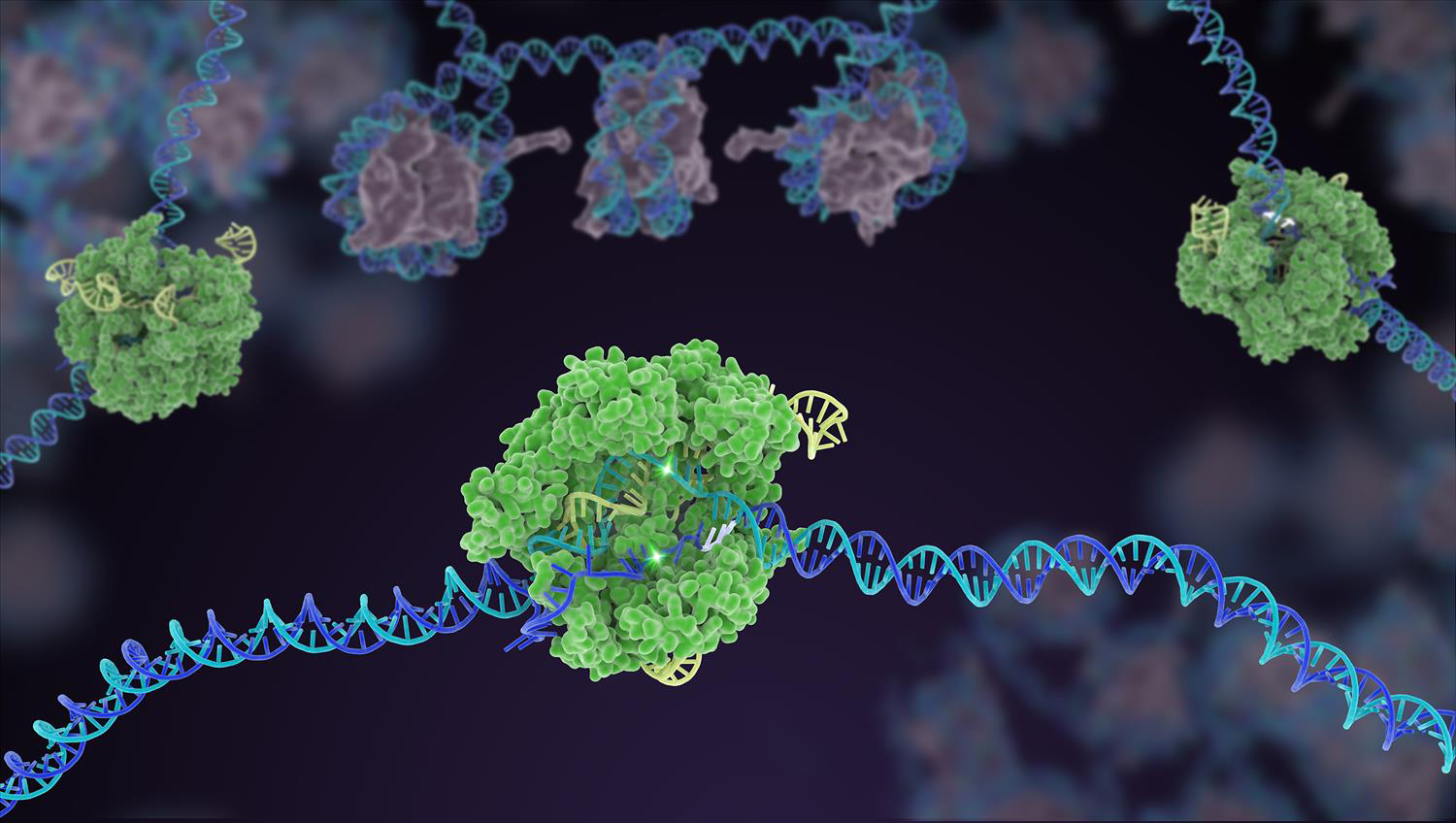 In the gene-editing tool CRISPR, a small strand of RNA identifies a specific chunk of DNA. Then the enzyme Cas9 (green) swoops in and cuts the double-stranded DNA (blue/purple) in two places, removing the specific chunk. 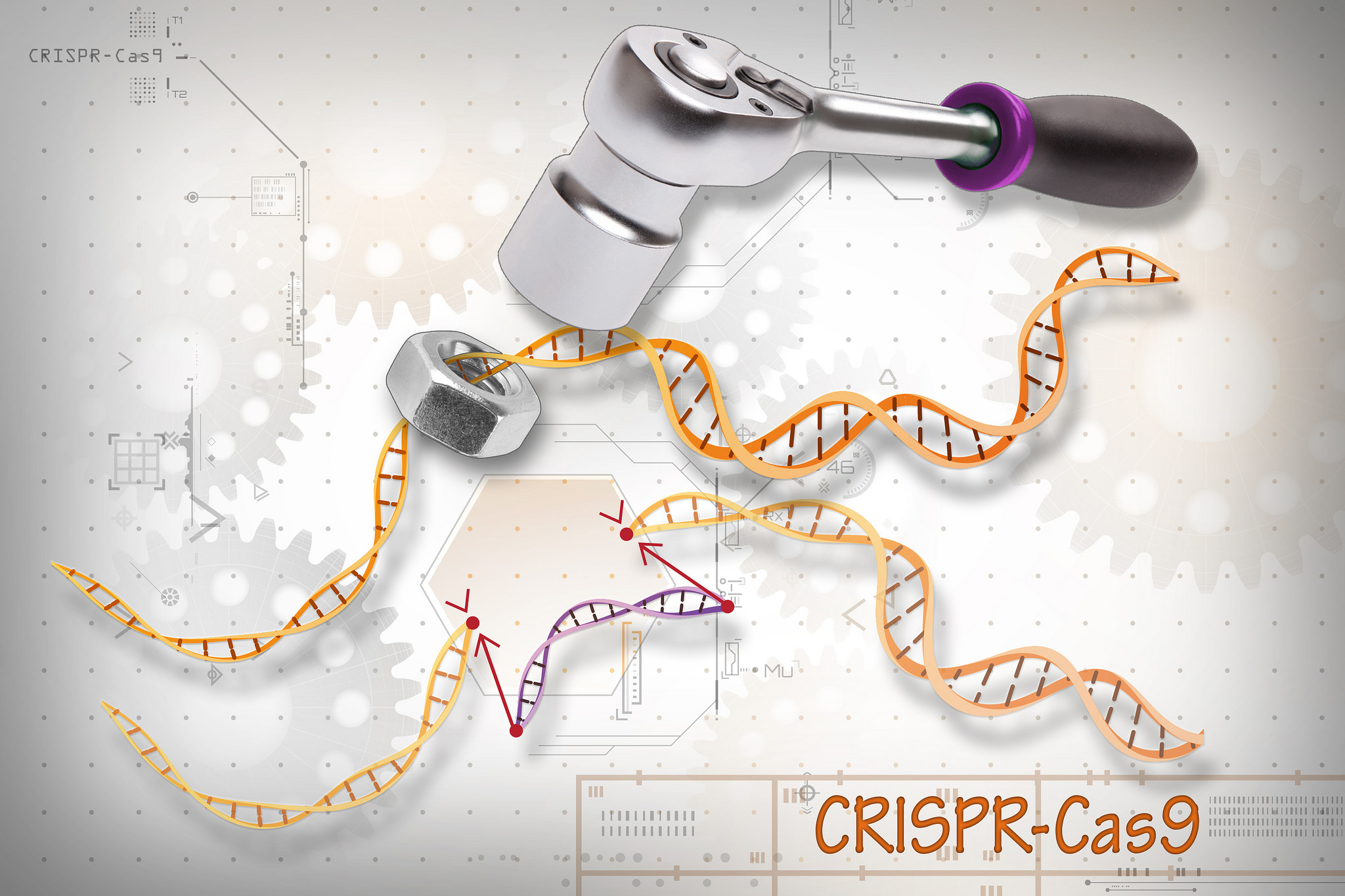 CRISPR-Cas9 is a customizable tool that lets scientists cut and insert small pieces of DNA at precise areas along a DNA strand. The tool is composed of two basic parts: the Cas9 protein, which acts like the wrench, and the specific RNA guides, CRISPRs, which act as the set of different socket heads. These guides direct the Cas9 protein to the correct gene, or area on the DNA strand.NIH

CRISPR-Cas9 is a customizable tool that lets scientists cut and insert small pieces of DNA at precise areas along a DNA strand. The tool is composed of two basic parts: the Cas9 protein, which acts like the wrench, and the specific RNA guides, CRISPRs, which act as the set of different socket heads. These guides direct the Cas9 protein to the correct gene, or area on the DNA strand, that controls a particular trait. This lets scientists study our genes in a specific, targeted way and in real-time. 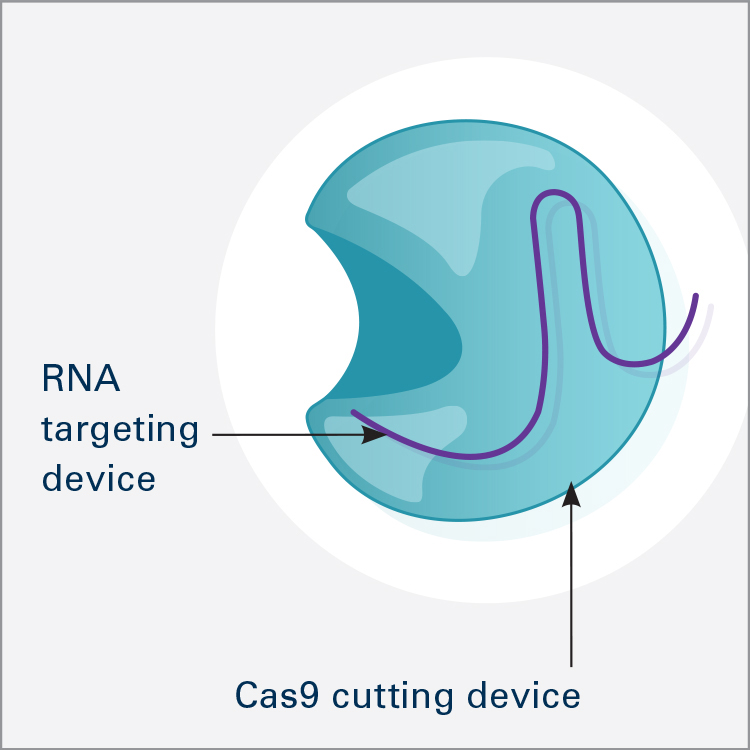 The CRISPR system has two components joined together: a finely tuned targeting device (a small strand of RNA programmed to look for a specific DNA sequence) and a strong cutting device (an enzyme called Cas9 that can cut through a double strand of DNA).NIGMS/NIH

The CRISPR system has two components joined together: a finely tuned targeting device (a small strand of RNA programmed to look for a specific DNA sequence) and a strong cutting device (an enzyme called Cas9 that can cut through a double strand of DNA). 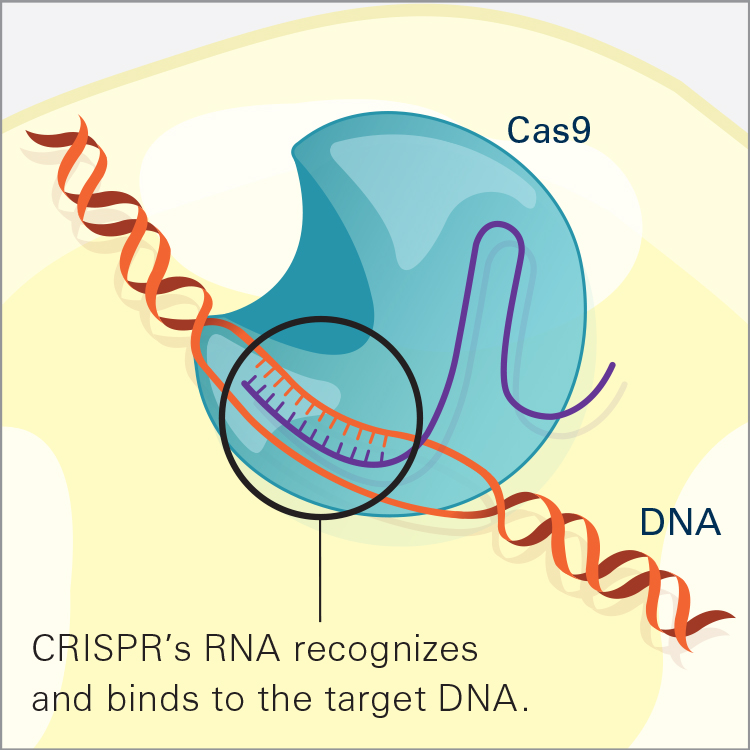 Once inside a cell, the CRISPR system locates the DNA it is programmed to find. The CRISPR seeking device recognizes and binds to the target DNA (circled, black).NIGMS/NIH

Once inside a cell, the CRISPR system locates the DNA it is programmed to find. The CRISPR seeking device recognizes and binds to the target DNA (circled, black). 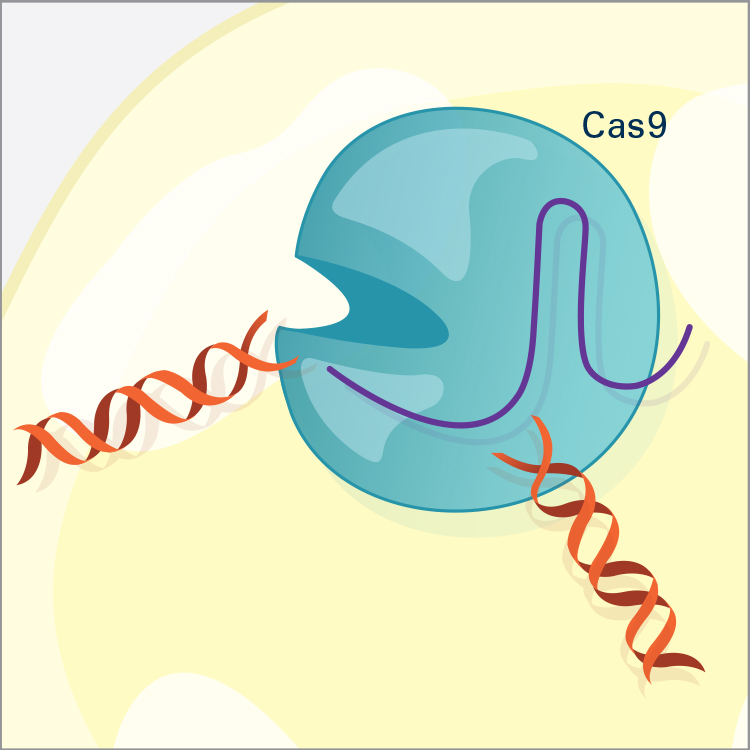 The Cas9 enzyme cuts both strands of the DNA 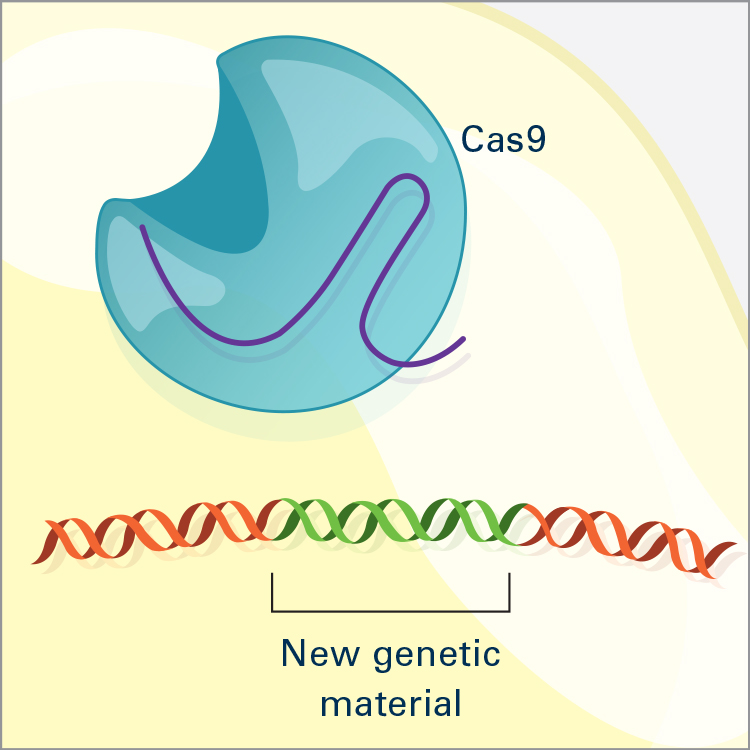 Researchers can insert into the cell new sections of DNA. The cell automatically incorporates the new DNA into the gap when it repairs the broken DNA.NIGMS/NIH

Researchers can insert into the cell new sections of DNA. The cell automatically incorporates the new DNA into the gap when it repairs the broken DNA.

NIH Director Dr. Francis Collins talks about the importance of somatic cell gene editing and how it could be used to combat genetic diseases. If you would like the files of the video clips, please contact Wole Akinso. 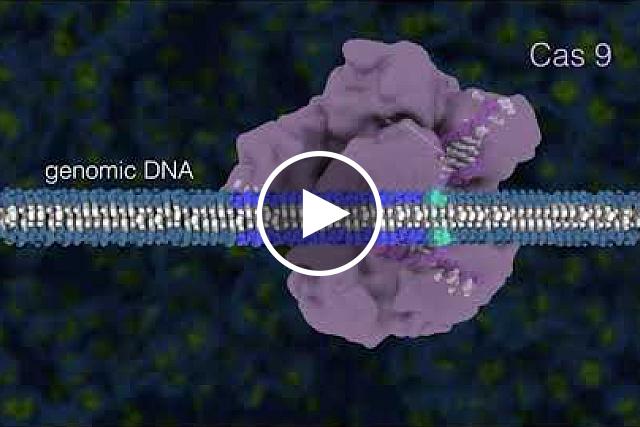 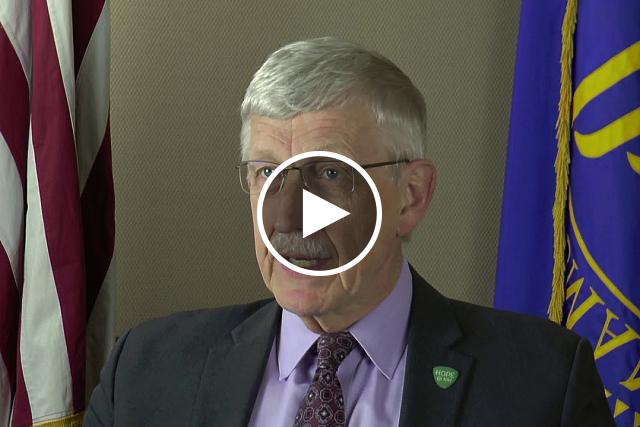 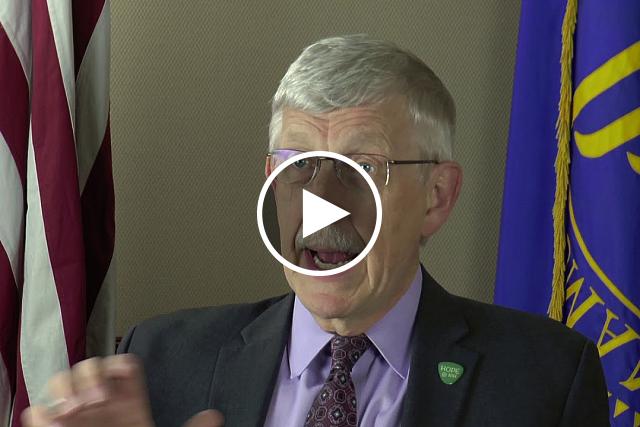 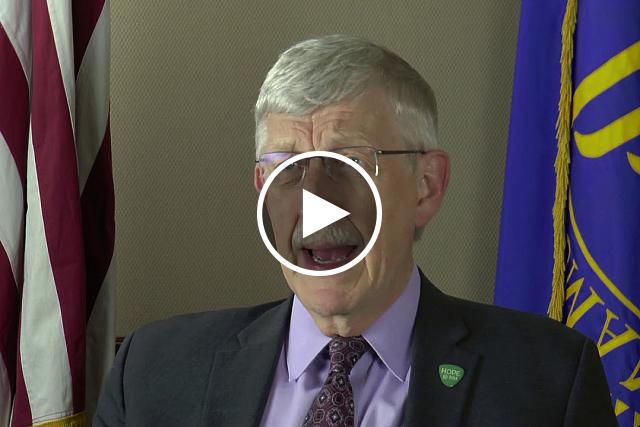