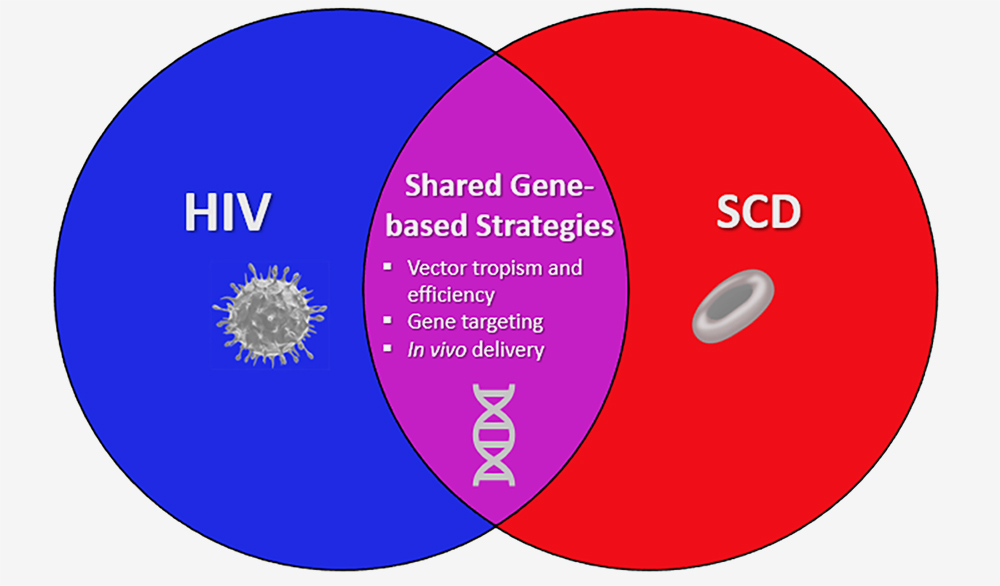 The collaboration will align aggressive, high-reward research efforts to accelerate progress on shared gene-based strategies (depicted in green) to cure sickle cell disease and HIV that are available globally including in low-resource settings, while continuing to invest in other parallel research efforts on cures for these two diseases outside of the collaboration. NIH

The National Institutes of Health plans to invest at least $100 million over the next four years toward an audacious goal: develop affordable, gene-based cures for sickle cell disease (SCD) and HIV. The Bill & Melinda Gates Foundation will also invest $100 million toward this goal. The intention is for these cures to be made globally available, including in low-resource settings.

This initiative follows a bold announcement made earlier this year by President Donald J. Trump during the State of the Union Address to end the HIV epidemic in the United States in the next 10 years. Ending the HIV Epidemic: A Plan for America aims to leverage the powerful data and tools now available to reduce new HIV diagnoses in the United States by 75% in five years and by 90% by 2030. The Trump Administration has also elevated the attention paid to sickle cell disease, identifying it as an intractable health challenge with the potential for dramatic advances in the coming years.

Dramatic advances in genetics over the last decade have made effective gene-based treatments a reality, including new treatments for blindness and certain types of leukemia. Yet these breakthroughs are largely inaccessible to most of the world by virtue of the complexity and cost of treatment requirements, which currently limit their administration to hospitals in wealthy countries. To make these treatments effective and available for SCD and HIV, which disproportionately affect populations living in Africa or of African descent, new investment is needed to focus research on the development of curative therapies that can be delivered safely, effectively and affordably in low-resource settings.

The collaboration between the NIH and the Gates Foundation sets out a bold goal of advancing safe, effective and durable gene-based cures to clinical trials in the United States and relevant countries in sub-Saharan Africa within the next seven to 10 years. The ultimate goal is to scale and implement these treatments globally in areas hardest hit by these diseases.

“This unprecedented collaboration focuses from the get-go on access, scalability and affordability of advanced gene-based strategies for sickle cell disease and HIV to make sure everybody, everywhere has the opportunity to be cured, not just those in high-income countries,” said NIH Director Francis S. Collins, M.D., Ph.D. “We aim to go big or go home.”

“In recent years, gene-based treatments have been groundbreaking for rare genetic disorders and infectious diseases,” said Trevor Mundel, M.D., Ph.D., President, Global Health Program, Bill & Melinda Gates Foundation. “While these treatments are exciting, people in low- and middle-income countries do not have access to these breakthroughs. By working with the NIH and scientists across Africa, we aim to ensure these approaches will improve the lives of those most in need and bring the incredible promise of gene-based treatments to the world of public health.”

SCD and HIV are major burdens on health in low-resource communities around the world. Approximately 95% of the 38 million people living with HIV globally are in the developing world, with 67% in sub-Saharan Africa, half of whom are living untreated. Fifteen million babies will be born with SCD globally over the next 30 years, with about 75% of those births occurring in sub-Saharan Africa. An estimated 50-90% of infants born with SCD in low-income countries will die before their 5th birthday and SCD is identified as the underlying cause of about 1 in 12 newborn deaths in sub-Saharan Africa.

The collaboration will focus on two areas of coordination:

Though SCD, a genetically inherited disease, and HIV, an acquired infectious disease, present significantly different scientific challenges, gene-based treatments hold promise for both, and many of the technical challenges for gene-based cures are expected to be common to both diseases.

To achieve the goals of the collaboration, both projects will require new delivery systems that can get prospective therapies to the right places in the body and optimize treatments to target the cells involved in the respective diseases efficiently and specifically. For SCD, that would mean repairing or compensating for the mutations in hemoglobin that cause SCD in hematopoietic stem cells. For HIV, that would mean targeting the reservoir of proviral DNA that continues to lurk inside a small number of cells, even after many years of effective antiviral treatment.

Such treatments that happen entirely within the body, known as in vivo treatments, would be a major step forward from current treatments, which apply genetic therapies to cells taken outside the body (ex vivo) and then reinfused.

“We are losing too much of Africa’s future to sickle cell disease and HIV,” said Matshidiso Rebecca Moeti, M.B.B.S., Regional Director for Africa, World Health Organization. “Beating these diseases will take new thinking and long-term commitment. I’m very pleased to see the innovative collaboration announced today, which has a chance to help tackle two of Africa’s greatest public health challenges.”

The collaboration’s goal for SCD is to develop an easy-to-administer, gene-based intervention to either correct the SCD gene mutations or promote fetal hemoglobin gene expression to achieve normal hemoglobin function. The path to a cure will rely in part on the development of gene-based delivery systems capable of selectively targeting hematopoietic stem cells. This will result in the precise correction of gene mutations or addition of a gene to promote sufficient levels of normal hemoglobin expression and function.

“Our excitement around this partnership rests not only in its ability to leverage the expertise in two organizations to reduce childhood mortality rates in low-resource countries, but to bring curative therapies for sickle cell disease and HIV to communities that have been severely burdened by these diseases for generations,” said Gary H. Gibbons, M.D., Director, National Heart, Lung, and Blood Institute (NHLBI), part of the NIH. “A person’s health should not be limited by their geographic location, whether rural America or sub-Saharan Africa; harnessing the power of science is needed to transcend borders to improve health for all.”

In addition, more needs to be done to understand the burden of SCD in sub-Saharan Africa and to screen newborns for SCD in high-risk geographic areas. NHLBI has already begun to establish a clinical research infrastructure in sub-Saharan Africa. However, additional clinical research and capacity-building efforts are needed to deliver point-of-care screening, such as at the time of infant vaccinations, and to initiate a standard of care. These activities will be undertaken by NIH and Gates Foundation outside of the collaboration, but will support collaboration efforts.

Nearly 38 million people worldwide are living with HIV, with 770,000 deaths due to AIDS in 2018 alone. Like SCD, people in sub-Saharan Africa face a disproportionate risk of HIV. Antiretroviral therapy is highly effective and has made it possible for people with HIV to live long, healthy lives without transmitting the disease to sexual partners. However, treatment must be maintained for a lifetime. A low-cost, safe, effective and durable cure that also prevents reinfection upon sexual exposure has long been a goal to curb the HIV global pandemic.

A number of approaches will be considered to meet the goal of a scalable HIV cure. Both the Gates Foundation and National Institute of Allergy and Infectious Diseases (NIAID), part of NIH, are already funding cure research, exploring gene-based treatments in concert with long-acting therapeutics, monoclonal antibodies and other immune-based targets. This collaboration will allow the partners to intensify and better coordinate ongoing research efforts on these strategies, accelerating studies into early phase clinical trials to safely test promising tools and interventions. A particularly appealing approach is to identify the location of the reservoir of infected cells that still harbor integrated HIV genomes after treatment and target those DNA sequences with gene editing technology.

“This collaboration is an ambitious step forward, harnessing the most cutting-edge scientific tools and NIH’s sizable global HIV research infrastructure to one day deliver a cure and end the global HIV pandemic,” said NIAID Director Anthony S. Fauci, M.D. “We are taking into account those with the greatest need at the foundation of this effort, to ensure that, if realized, this exceptional public health achievement will be made accessible to all.”

Backgrounder: NIH Collaboration on Gene-Based Cures for SCD and HIV