2012 Research Highlights — Insights from the Lab

NIH conducts and funds wide-ranging research to improve the nation's health. With NIH support, scientists across the country and around the world uncover basic biomedical advances and conduct the clinical and translational research that transforms discoveries into medical practice. Groundbreaking NIH-funded research often receives top scientific honors. In 2012, these honors included the Nobel Prize in chemistry and several Lasker awards. Here is just a small sampling of the research accomplishments made by NIH-supported scientists in 2012. 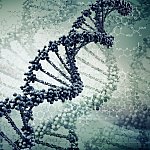 A worldwide research consortium created a view of the human genome that extends well beyond our genes. The NIH-funded ENCODE project involved over 1,600 sets of experiments on 147 types of tissue. Scientists catalogued many aspects of gene regulation that can affect function. The project’s ultimate goal is to identify all functional elements in the human genome, including genes and the DNA in between.
PubMed Abstract: Systematic localization of common disease-associated variation in regulatory DNA »
PubMed Abstract: An integrated encyclopedia of DNA elements in the human genome » 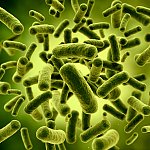 The human body is host to trillions of microbes. Most are beneficial, but some can cause illness. NIH-funded investigators are using genomic techniques to study these microbial communities and their genes—collectively known as the microbiome. In a series of reports, scientists from nearly 80 institutions described 5 years of research that offers insights into how our microbes affect human health.
PubMed Abstract: A framework for human microbiome research »
PubMed Abstract: Structure, function and diversity of the healthy human microbiome »
PubMed Abstract: Sequence analysis of the human virome in febrile and afebrile children »
PubMed Abstract: A metagenomic approach to characterization of the vaginal microbiome signature in pregnancy » 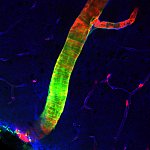 NIH-funded scientists discovered a system of tiny channels in the mouse brain that seem to quickly and efficiently remove waste products. Malfunction of this “glymphatic system” slows the clearance of amyloid beta, a brain protein that builds up in patients with Alzheimer’s disease. The finding may lead to new ways of treating neurodegenerative disorders. Pubmed Abstract » 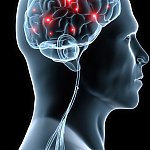 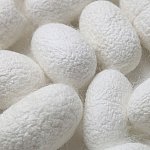 Stabilizing Vaccines and Antibiotics With Silk

NIH-supported researchers developed a way to use silk to store and distribute vaccines and antibiotics without having to keep them cold. Refrigeration can account for up to 80% of the cost of vaccines. The new silk-based film helps stabilize vaccines and drugs stored for months at warmer temperatures. The technique could lower costs and help expand the use of these lifesaving medical tools around the world. Pubmed PubMed Abstract » 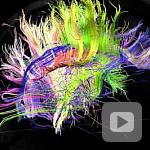 A landmark NIH-funded study showed that nerve fibers in the brain aren't just a tangle of overlapping wires. Rather, they form a highly structured 3-D grid, with nerve pathways running parallel to each other and crossing each other at right angles. The finding is part of a larger effort called the Human Connectome Project, which is mapping connections between the brain’s 100 billion neurons. Pubmed PubMed Abstract » 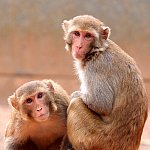 Social rank has broad effects on gene regulation, especially in the immune system, according to a study in rhesus macaques. By studying social groups of female monkeys, NIH-funded scientists identified nearly 1,000 genes whose expression levels varied with social hierarchy. The results provide insight into the long observed links between social stress and physiology. Pubmed PubMed Abstract » 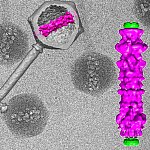 Cryo-electron microscopy uses radiation to look at the surfaces of viruses, but radiation can destroy the tiny structures within. NIH-supported scientists turned the problem of radiation damage into an asset by taking and then superimposing many “snapshots” of viruses under increasing doses of radiation. They used the technique to clearly visualize the inner structure of a virus. The method may yield insights that suggest new therapeutic strategies. Pubmed PubMed Abstract »

2012 Research Highlights — Insights from the Lab