Stem cells are believed to play a vital role in aging. As stem cells age, they lose their ability to renew the body’s tissues and organs. Over time, they stop dividing and eventually die. This decline in numbers is known as stem cell exhaustion. However, the process isn’t well understood.

The hair follicle is an ideal system to examine stem cell populations during aging. Stem cells in a compartment of the hair follicle called the bulge give rise to hair. When hair falls out, it can be replaced by new hair generated by the remaining stem cells. Permanent hair loss was thought to occur when most of these stem cells were damaged or died.

To understand how stem cells are depleted with age in live animals, a team led by Dr. Rui Yi of Northwestern University studied how hair follicle stem cells behave in aging mice. Their work was funded by NIH’s National Institute of Arthritis and Musculoskeletal and Skin Diseases (NIAMS), National Institute of General Medical Sciences (NIGMS), and National Cancer Institute (NCI). The results were published in Nature Aging on October 4, 2021.

The team observed the growth of individual hair follicles in the ear using laser light that penetrates deep into tissue. They labeled hair follicle stem cells with florescent proteins to track their development in young and old mice. The laser excites the fluorescent tags, which then emit light that can be observed under a microscope. Time-lapse images were periodically collected when mice were sedated and then analyzed on a computer. The researchers studied hundreds of hair follicles in young and old mice. For one study, they tracked 78 hair follicles over 16 days or more to monitor their behaviors over time. 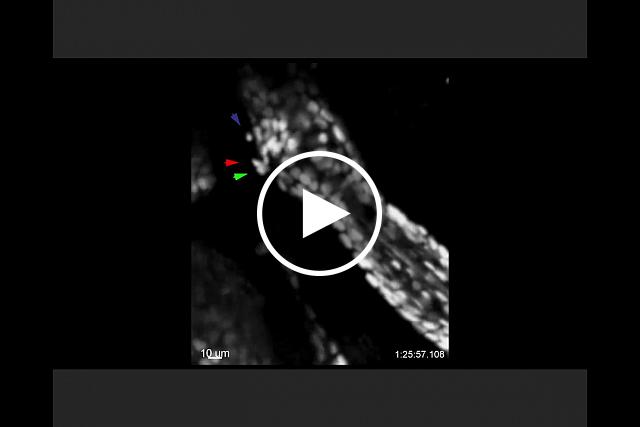 Four-hour time-lapse video shows the escape of stem cells, marked by arrows, from a hair follicle in an aging mouse. Some cells (red and green arrows) change the shape of their nuclei and squeeze through what are likely small openings in the follicle membrane before migrating away separately. Zhang et al, Nature Aging

They observed something unexpected: many stem cells gradually escaped from the bulge where they were housed and migrated into nearby skin tissue. This suggests that the stem cells lost their attachment, changed shape, and squeezed through small holes in the membrane surrounding the follicle. The escaped cells did not appear to immediately die after migrating.

Next, the researchers conducted tests to analyze the activity of genes they suspected might control the stem cell escape. Using single-cell genomic tools, they found reduced activity of certain genes in the aged stem cells involved in cell adhesion—how cells attach to each other—and the extracellular matrix, which helps provide structure to tissues.

FOXC1 and NFATC1 are regulators of these genes. To test their involvement, the scientists bred mice that lacked FOXC1 and NFATC1 in epithelial cells of the skin. They found that the animals showed premature hair thinning and hair loss.

This study documents a previously unknown cause of stem cell loss. The findings may lead to broader insights into the aging process beyond the hair follicle.

“Our findings provide evidence for a new model of stem cell exhaustion during aging,” Yi says. “It may bring new understanding of how tissue ages and suggest new avenues to explore for diseases associated with aging, such as cancer.”

Repeats in the genetic code underlie some human variation