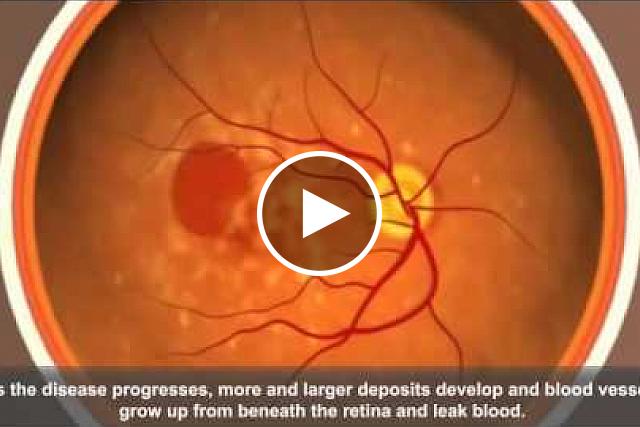 Near the center of the retina, at the back of the eye, is a small area known as the macula. The macula is needed for sharp, central vision, such as for seeing straight ahead to drive, read, and recognize faces. More than 2 million Americans have age-related macular degeneration (AMD). It’s a leading cause of vision loss among people aged 50 and older.

There are two types of AMD, dry and wet. Although there are therapies for the wet form, most people have the dry form. Doctors can prescribe certain supplements to slow down damage to the retina. But for most cases of dry AMD, there’s no effective treatment and no way to delay its progress before it impairs vision.

Previous population studies have found that a high glycemic diet is associated with AMD onset and progress. Carbohydrates with a high glycemic load, such as white bread, can be quickly digested and so cause spikes in blood sugar. Carbohydrates with a low glycemic load, such as whole-grain bread, take longer to digest. Their digestion involves gut bacteria, collectively known as the microbiome.

Inspired by findings from their studies with people, a team led by Drs. Allen Taylor and Sheldon Rowan of Tufts University explored the impact of dietary carbohydrates on retinal damage, a sign of AMD. The team hypothesized that switching middle-aged mice from a high glycemic diet to a low glycemic diet would delay or stop retinal damage. The study was supported in part by NIH’s National Eye Institute (NEI). Results were published in the Proceedings of the National Academy of Sciences on May 30, 2017.

Mice fed a high glycemic diet developed signs of retinal damage. Although the retina of a mouse lacks a macula, these signs were similar to those in people with dry AMD. Certain metabolic changes, such as high levels of cholesterol and insulin, were linked to retinal damage. The mice also had different bacteria in their gut microbiomes. Confirming previous mouse studies, the team did not observe significant retinal changes in mice fed the low glycemic diet.

When the mice were switched from a high to low glycemic diet, the build-up of certain harmful metabolic factors in eye tissue were delayed, stopped, or even reversed. The diet switch also stopped or reversed signs of AMD. Gut microbiomes in the mice were restored to that of mice fed a low glycemic diet. With further development, the metabolic factors the team identified might be used as biomarkers for prediction and detection of AMD and for evaluating experimental treatments.

“Our findings show an interaction between dietary carbohydrates, the gut microbiome, specific biochemical molecules, and AMD features. This work should lead to new approaches to understand, diagnose, and treat early AMD—perhaps before it affects vision,” Taylor explains. “Already anticipated by our human epidemiologic studies, the findings imply that we can optimize nutrition to prevent the progression of AMD.”

Antibodies from Ebola survivor could lead to treatments and vaccines