Researchers determined the structure of a specific dopamine receptor bound to the drug nemonapride, shown in pink. The red spheres are water molecules. UNC / UCSF

Dopamine is a chemical messenger produced in the brain. It plays a role in regions of the brain that regulate movement, emotion, motivation, and feelings of pleasure. Dopamine is also involved in different mental health conditions, such as schizophrenia, Parkinson’s disease, and attention deficit disorder.

Many drug treatments for mental health conditions target dopamine receptors. However, there are five different types of dopamine receptors, called D1, D2, D3, D4, and D5. Current medications often act on more than one. Because these receptors can have different functions in the brain, drugs that don’t bind specifically to just one can cause unintended side effects. A better understanding of the structural differences between dopamine receptors will help researchers create more targeted drugs.

A research team led by Dr. Bryan L. Roth at the University of North Carolina at Chapel Hill and Dr. Brian K. Shoichet at the University of California, San Francisco, set out to determine the structure of the human D4 dopamine receptor and create a compound that binds specifically to it. Their work was funded by NIH’s National Institute of Mental Health (NIMH) and National Institute of General Medical Sciences (NIGMS). The study was published in Science on October 20, 2017. 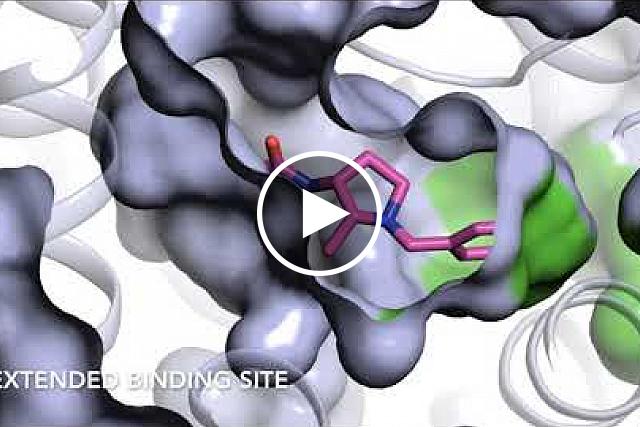 Using this structural information, the team computationally screened a virtual library of molecules for ones that might fit in the same binding pocket as nemonapride. They then tested the 10 highest-scoring candidates in the laboratory. These 10 molecules bound the D4 receptor weakly. However, the team's analysis yielded insights into how the drug binds to the D4 dopamine receptor and suggested other compounds to test.

Based on computational models and laboratory tests of hundreds of compounds, the team created a compound, called UCSF924, that strongly binds to the D4 receptor but not the other four receptors. Since dopamine receptors are a type of G protein–coupled receptor (GPCR), the team tested UCSF924 on 320 GPCRs to rule out off-target effects. None were activated by the drug.

“We now have the ability to get a crystal-clear image of these receptors to see details like never before,” Roth says. “Seeing these details allowed us to create a compound that tightly binds only to one kind of receptor. Our ultimate goal is to avoid so-called ‘scattershot drugs’ that hit many unwanted receptors and cause serious and potentially fatal side effects.”

“Our computational modeling capabilities allowed us to virtually screen over 600,000 compounds much faster than traditional screening methods and create a hierarchy of compounds that potentially bind only to the D4 dopamine receptor,” Shoichet says.

The researchers plan to test UCSF924 in animal models to see how targeting the D4 receptor alone alters brain function. They are also making the compound openly available to other researchers for use in their experiments.