Most of the body’s organs remove dead cells and other waste using the lymphatic system. Lymphatic vessels run alongside blood vessels and transport out lymph, a colorless fluid containing infection-fighting immune cells and waste. Lymph is filtered through the lymph nodes and then returned back into the bloodstream.

How the brain clears waste and fights infections, however, has been a mystery. Although the human brain has blood vessels, there was no evidence it has a lymphatic system. Recently, studies in mice found evidence of the brain’s lymphatic system in the dura, the brain's leathery outer coating.

To look for lymphatic vessels in primate brains, a team of researchers led by Dr. Daniel S. Reich at NIH’s National Institute of Neurological Disorders and Stroke (NINDS) used MRI to scan the brains of five healthy human volunteers who were injected with dyes to help visualize blood and lymphatic vessels. They also scanned the brains of three marmoset monkeys. The study was funded in part by NIH’s NINDS, National Cancer Institute (NCI), and National Institute on Aging (NIA). Results were published online in eLife on October 3, 2017. 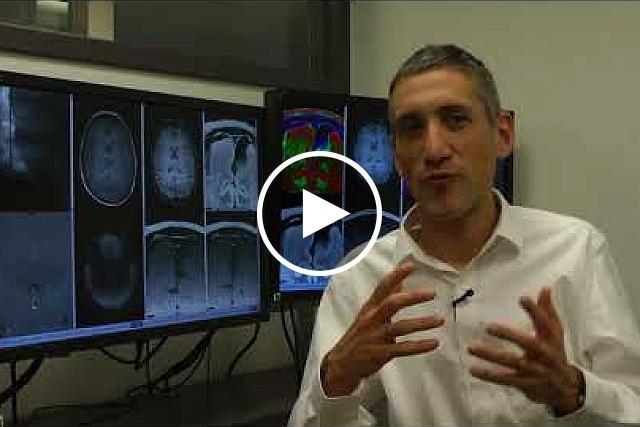 The researchers first injected gadobutrol, a magnetic dye with molecules small enough to leak out of blood vessels in the dura into lymphatic vessels, but too big to pass through the blood-brain barrier and enter other parts of the brain. With this dye, MRI images showed brightly lit blood vessels throughout the dura. The researchers then looked for vessels surrounding the blood vessels using different MRI techniques. They were able to see smaller but almost equally bright spots and lines that tracked along the blood vessels. They found these lymphatic vessels in all five human volunteers and all three monkeys.

The researchers also looked at the suspected lymphatic vessels in autopsied human and monkey brain tissue. They found that the vessels contained specific cells and protein markers that are unique to lymphatic vessels and distinguished them from blood vessels. These findings suggest the lymphatic system is a common feature of mammalian brains.

“We literally watched people’s brains drain fluid into these vessels,” Reich says. “We hope that our results provide new insights to a variety of neurological disorders.”

“These results could fundamentally change the way we think about how the brain and immune system interrelate,” says NINDS Director Dr. Walter J. Koroshetz.