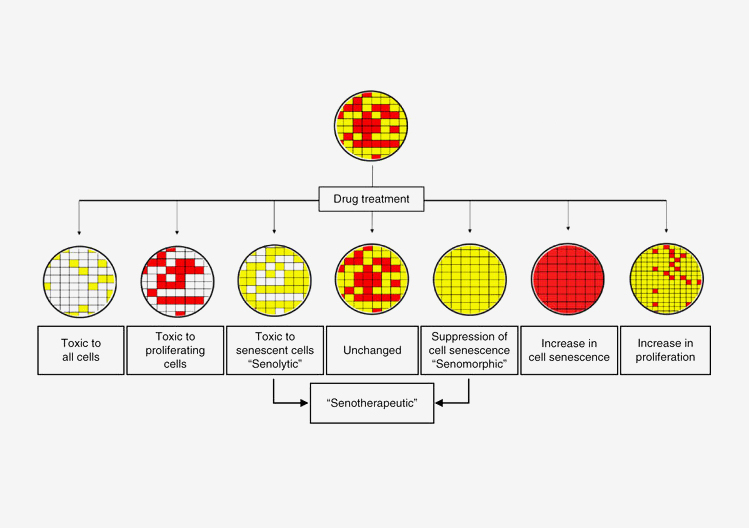 As people age, old or damaged cells stop dividing to produce new cells. This process is called senescence. Over time, senescent cells accumulate in various tissues of the body. Although no longer dividing, these cells are still alive and secrete compounds that can harm the tissues around them. Research suggests that the buildup of senescent cells over time may increase the likelihood of health problems and play a role in aging.

Researchers have recently discovered drugs, called senotherapeutics, that specifically combat senescent cells. By removing senescent cells from the body, these drugs have shown promise in prolonging a healthy lifespan, or healthspan, in animal models. A research team led by Drs. Paul Robbins and Laura Niedernhofer at the Scripps Research Institute Florida campus devised a way to identify new senotherapeutics. Their work was supported in part by NIH’s National Institute on Aging (NIA) and National Institute of Diabetes and Digestive and Kidney Diseases (NIDDK). Results were published on September 4, 2017, in Nature Communications.

The scientists used mouse cells that quickly senesce under certain conditions. They developed an approach that could distinguish the senescent cells. By comparing the number of senescent cells with total cells, the method could identify both compounds that suppress senescence (senomorphics) and that selectively kill senescent cells (senolytics).

The team screened 97 compounds known to regulate the process that breaks down and recycles waste within our cells. This recycling process, called autophagy, has previously been linked to aging and lifespan. Seven of these compounds proved to be senomorphic. Six were senolytic.

Further testing confirmed that two of the senolytic compounds, geldanamycin and 17-AAG (tanespimycin), efficiently killed senescent cells without significantly affecting healthy ones. Both inhibit a protein called HSP90 (heat shock protein 90). HSP90 plays an important role in protein recycling and may be involved in cancer.

The scientists next tested 17-DMAG (alvespimycin), which is related to 17-AAG. The drug selectively killed different types of senescent cells from both humans and mice. The team also used 17-AAG to treat mice that had a condition causing age-related degenerative diseases and short lifespan. The drug extended the animals’ healthspans, delaying the onset of several age-related symptoms.

“Our screening platform already has identified multiple classes of compounds that extend healthspan in animal models,” Robbins said. “Right now, we have a pipeline of compounds that should be even more effective than the ones in the study.”

These results demonstrate the ability to identify compounds that specifically target senescent cells. The strategy shows promise for finding compounds with the potential to treat age-related diseases and extend healthy lifespans. However, senotherapeutics will require careful study in people to discover whether there are undesirable side effects.