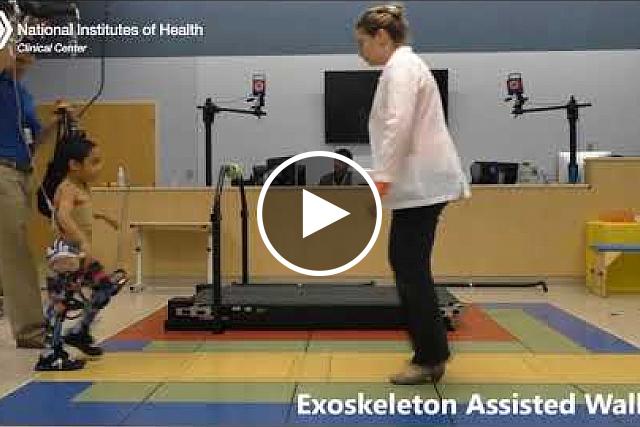 About 10,000 children are diagnosed with cerebral palsy nationwide each year. Cerebral palsy is a group of neurological disorders that affect the part of the brain that directs muscle movement. It’s detected in infancy or early childhood.

People with cerebral palsy have trouble controlling movement, balance, and posture. One symptom is crouch gait, an excessive bending of the knees while walking. It’s a common and debilitating condition in children with cerebral palsy. There is no cure. Treatments to aid walking include the use of braces or splints, muscle injections, physical therapy, and leg surgery. Despite treatments to assist those who can walk, many children worsen and lose the ability to walk by the time they’re adults.

Dr. Thomas Bulea and his team of researchers at the NIH Clinical Center created a robotic exoskeleton to treat crouch gait. At key points during the walking cycle, the wearable device provides powered knee extension assistance. Bulea and his team tested whether the robotic exoskeleton could lessen crouch gait when worn by children with cerebral palsy. Results were published on August 23, 2017, in Science Translational Medicine.

The seven children taking part in the study were between 5 and 19 years old. Each was diagnosed with crouch gait from cerebral palsy but could walk at least 30 feet without using a walking aid. The children had six appointments over a two- to three-month period. During the initial visits, the researchers made a custom-fitted exoskeleton for each child, and the child practiced walking with it. At later visits, the team collected data using infrared cameras and other sources to assess gait.

The research team saw knee extension improvements in six of the seven participants. The gains (8 to 37 degrees) were similar to average improvements from leg surgery.

“The improvements in their walking, along with their preserved muscle activity, make us optimistic that our approach could train a new walking pattern in these children if deployed over an extended time,” Bulea says. “This study paves the way for the exoskeleton’s use outside the clinic setting, greatly increasing the amount and intensity of gait training, which we believe is key to successful long-term outcomes in this population.”

These results support the design of larger studies of the robotic exoskeleton for improving gait in children with cerebral palsy.