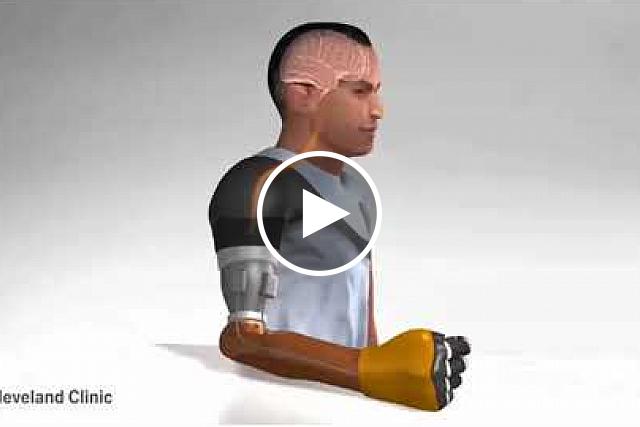 When you reach your hand out to grab your coffee cup or another object, your brain is signaling certain muscles to move. As your hand moves in response, nerves for those muscles send a message back to the brain about the movement. You don’t have to see your hand to know that you’ve grabbed your cup. You can feel it.

Without these messages from the muscles and nerves, a person with a prosthetic hand or arm must rely on the eyes to relay messages about movement to the brain. But feedback from vision alone can be a clumsy substitute for complex sensory feedback.

Researchers are developing new technologies to assist those living with limb loss. Electrodes implanted in the remaining arm muscles, nerves, spinal cord, and brain can detect a person’s intent to move. When these are converted into digital commands, they can drive the motors in a hand prosthesis to significantly improve function. Electrodes and other strategies have also been used to help restore some of the lost feedback messages between hand and brain. In previous studies, these approaches have helped people detect touch as well as elbow and some finger movements.

A research team led by Dr. Paul D. Marasco of the Cleveland Clinic set out to engineer human perception with a robotic technology that could impart a better sense of natural movement and control in people with bionic prosthetic hands. The work was funded in part by an NIH Director’s Transformative Research Award and NIH’s National Institute of Neurological Disorders and Stroke (NINDS). Results were published on March 14, 2018, in Science Translational Medicine.

The two women and four men taking part in the study were between the ages of 28 and 68. Each was missing an arm from above the elbow. Previously, they had undergone a procedure known as targeted reinnervation. For this procedure, a surgeon redirects the nerves for the missing part of the limb—in this case, nerves for the hand and fingers—to the remaining muscle. When the muscle contracts, those signals can be used to drive the motion of bionic hands.

The team of neuroscientists, clinicians, and engineers built an interface between the brain and the prosthetic hand to create illusions of the motions of a hand forming complex gestures, such as grasping an object. Small robots vibrated the reinnervated muscles in the arm. These vibrations caused perceptual illusions that tricked the brain into thinking that the hand was moving in complex ways. Even without seeing the prosthetic hand, the people who took part in the study could rely on the illusory feedback technology to position their hands effectively and correct for their own errors.

“By restoring the intuitive feeling of limb movement—the sensation of opening and closing your hand—we are able to blur the lines between what the patients’ brains perceived as ‘self’ versus ‘machine,’” Marasco says. “These findings have important implications for improving human-machine interactions and bring us closer than ever before to providing people with amputation with complete restoration of natural arm function.”

“Decades of research have shown that muscles need to sense movement to work properly. This system basically hacks the neural circuits behind that system,” adds Dr. James W. Gnadt of NINDS. “This approach takes the field of prosthetic medicine to a new level which we hope will improve the lives of many.”