An illustration of the transient pacemaker mounted on the heart. Northwestern University / George Washington University.

Pacemakers are a vital part of medical care for many people with heart rhythm disorders. These tiny devices can also help some people with heart failure, a condition that occurs when the heart can’t pump enough blood to the body.

Sometimes, such as after a heart attack or heart surgery, people only need a temporary pacemaker. Temporary pacemakers use wires connected to a power source outside the body. But these devices can cause complications. Potential problems include infection from the wires crossing the skin, scar tissue formation, and damage to the heart upon removal.

Researchers led by Drs. John Rogers and Rishi Arora from Northwestern University and Dr. Igor Efimov from George Washington University developed a new type of temporary pacemaker. They built the device entirely from components that naturally break down in the body over time. The pacemaker is also powered wirelessly, using technology similar to that used for the wireless charging of portable electronic devices.

The team tested the new dissolvable pacemaker in heart-tissue samples taken from mice, rabbits, and people, and in live dogs and rats. The study was funded in part by NIH’s National Heart, Lung, and Blood Institute (NHLBI). Results were published on June 28, 2021, in Nature Biotechnology.

In tests in heart tissue samples, the temporary pacemaker was able to wirelessly absorb and transmit enough power to control the rhythm of either the upper or lower chambers of the heart (the atria and the ventricles). 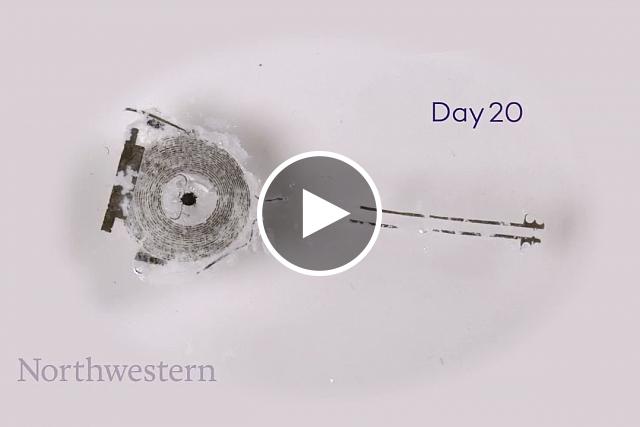 The researchers next tested the device in live dogs. The temporary pacemaker absorbed enough power to control the heart’s rhythm when the wireless charger was held about 6 inches from the chest or closer. The power generated was equivalent to that required to pace a human heart.

For longer-term studies, the team implanted smaller versions of the device into rats. The pacemaker was able to control the heart’s ventricles for 4 days after surgery. After that, its function began to break down. Using serial CT scans to track the device, the team found that the pacemakers broke down entirely in the body by the seventh week after surgery.

Further analysis of the scans showed that heart tissue was unharmed by the device. Blood tests also found no signs of inflammation.

“Hardware placed in or near the heart creates risks for infection and other complications,” Rogers says. “Our wireless, transient pacemakers overcome key disadvantages of traditional temporary devices by eliminating the need for [wires that cross the skin and] surgical extraction procedures.”

Further work will be needed before testing in people. Changing the types and thickness of the materials can alter how long the device functions before breaking down in the body. This could provide temporary heart pacing for periods ranging from several days to several weeks.