A glove is being developed to enable MRI scans of a moving hand, such as a hand grasping a peach.Zhang et al., Nature Biomedical Engineering

MRI is a non-invasive imaging technology that produces 3-D detailed anatomical images. Doctors use MRI scanners to look inside the body at the non-bony parts, or soft tissues. The brain, spinal cord, and nerves, as well as muscles, ligaments, and tendons, can be seen much more clearly with MRI than with x-rays.

MRIs use powerful magnets that force protons in the body to line up a certain way. When a radiofrequency wave is then pulsed through the body, some protons are stimulated to move out of alignment. When the radiofrequency pulse is turned off, MRI sensors can detect the energy released as the protons realign with the magnetic field.

To detect these changes in energy, modern MRI sensors are made of low impedance coils (structures that allow current to flow easily). However, low impedance coils must be precisely arranged to avoid interfering with each other and corrupting the image. This has resulted in detector designs with limited flexibility. These detectors either sacrifice imaging sensitivity or must restrict a person’s movement during an MRI scan.

A team led by Dr. Martijn Cloos at NYU Langone Health investigated whether high impedance coils, which don’t allow current to flow easily, could be used to design a more versatile detector. By blocking current from flowing during detection, they reasoned, they could prevent the coils from creating their own magnetic fields and interfering with each other. This lack of interference could allow imaging while people are moving. The research was supported by NIH’s National Institute of Biomedical Imaging and Bioengineering (NIBIB). Results were published in Nature Biomedical Engineering on May 4, 2018. 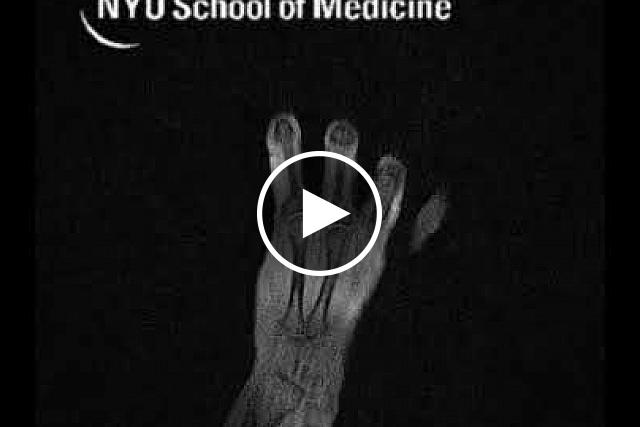 This video shows MRI of a moving hand.

The team first used a 3-D printer to explore different coil designs. Based on their findings, the researchers created a proof-of-concept device by stitching eight high impedance coils into a cotton glove. Each finger was wrapped by an individual coil so that they could move independently during the scan.

“Our results represent the first demonstration of an MRI technology that is both flexible and sensitive enough to capture the complexity of soft-tissue mechanics in the hand,” says lead author Dr. Bei Zhang.

The glove is just one of many potential applications for this technology. “We hope that this result ushers in a new era of MRI design,” Cloos says, “perhaps including flexible sleeve arrays around injured knees, or comfy beanies to study the developing brains of newborns.”