Spongy stomach sensor that could be swallowed 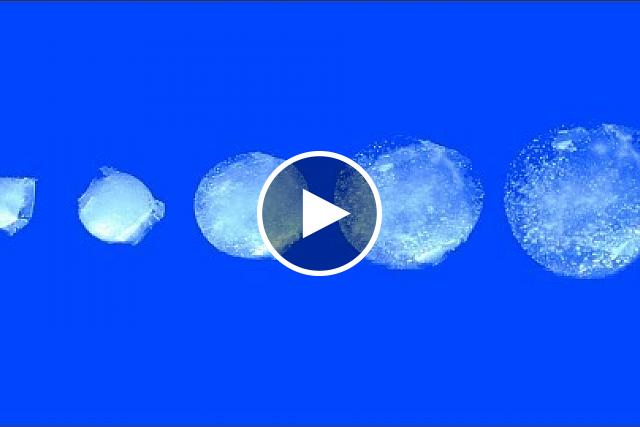 Your stomach is a hostile place. After food travels to your belly, it starts to dissolve in stomach acid. Your stomach’s strong muscles grind food up. Over about one to four hours, food particles from a meal pass through the valve leading into your intestine.

Researchers have been trying to come up with a medical device that could survive the harsh environment of the belly. Such a device might monitor stomach conditions, detect diseases, and also deliver drugs. But the dissolving acid and grinding muscles have been barriers to success. Another barrier is making a device just the right size so it can be swallowed yet won’t get stuck in the valve leading into the intestine.

The hydrogel device can swell to a large soft sphere, and deswell to a floppy membrane.Xinyue Liu, Shaoting Lin, MIT

A team of engineers led by Dr. Xuanhe Zhao of the Massachusetts Institute of Technology set out to design a soft but strong device that could be swallowed and then quickly expand in the stomach to become too large to pass into the intestine. Inspired by pufferfish, which can quickly inflate and then later deflate their spherical body, the team wanted their device to also shrink on demand. After shrinking, the tiny device would be small enough to pass out of the body through the intestine.

The engineers fabricated a sphere from two kinds of hydrogels. The outer hydrogel membrane consisted of polyvinyl alcohol. Their method of freeze-drying the polyvinyl alcohol made the membrane soft and porous but strong. Inside this spherical membrane were particles of polyacrylic acid, which can quickly absorb fluids.

The effort was supported in part by NIH’s National Institute of Biomedical Imaging and Bioengineering (NIBIB). A paper about the strong hydrogel material was published in Science Advances on January 25, 2019. Results from lab and animal testing of the device made from two hydrogels appeared in Nature Communications on January 30, 2019.

When the team dropped their 3-cubic-centimeter hydrogel test device into water or stomach fluid, the volume expanded by about 25 times in 10 minutes. A concentrated dose of calcium could shrink the resulting sphere in 15 minutes. The calcium dose would be about 20 times what’s in a glass of milk. Other tests showed that the device could withstand nearly 27,000 compressions.

The research team added a wireless temperature sensor and tested the device in six Yorkshire pigs. It stood up to both the harsh stomach acid and the grinding muscles for up to 29 days. While in the stomach, the sensor captured data every 10 minutes.

“The dream is to have a Jell-O-like smart pill, that once swallowed stays in the stomach and monitors the patient’s health for a long time such as a month,” Zhao says.

Lab tests showed that, in addition to sensors for monitoring conditions in the stomach, the device could carry substances like caffeine for slow release into the belly. The device might also be used to restrict meal sizes by taking up space inside the stomach. However, further development will be needed before testing the device in people.

Spongy stomach sensor that could be swallowed