The clear part of the longtail glasswing butterfly’s wing is nearly invisible from any direction. Caltech

About 3 million people in the United States have the eye disease known as glaucoma. It’s one of the main causes of permanent blindness. The most common form of glaucoma is associated with increased eye pressure. That pressure can damage the optic nerve and cause vision loss. Increased pressure doesn’t usually cause symptoms and must be detected during an eye exam. Early detection and treatment with eye drops, pills, or surgery may prevent vision loss. Because there’s no cure, routine checkups are needed to monitor eye pressure.

A research team led by Dr. Hyuck Choo at the California Institute of Technology (Caltech) has been developing a sensor that can be implanted into the eye to monitor eye pressure. When a certain type of light shines on the sensor, the signal it reflects depends on eye pressure. A limitation of this design is that the pressure reading from the sensor isn’t accurate unless light is directed into the sensor at a specific angle.

Choo’s team set out to improve the sensor design so that a user wouldn’t need to hold the light source at such a precise angle. A research team led by Dr. David Sretavan at the University of California, San Francisco (UCSF), implanted and tested the new sensor in lab rabbits. The research, which was supported in part by NIH’s National Eye Institute (NEI), was published online in Nature Nanotechnology on April 30, 2018. 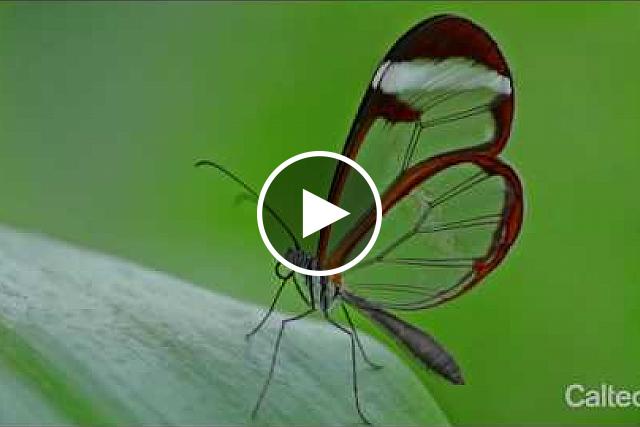 The Caltech research team analyzed the longtail glasswing butterfly to figure out what made its wings nearly invisible from any direction. They found that tiny pillar structures were the reason that light didn’t reflect from the clear part of the wing. No matter what the angle of light hitting the clear part of the wing, it would pass through. Each pillar was about 100 nanometers wide, or 1,000 times thinner than paper. They reproduced this nanopillar configuration on a silicon nitride membrane and incorporated it into a pressure sensor.

To measure the impact of the angle of light on the sensor’s reading, the team placed the sensors on a tilt stage within a pressure-controlled chamber. Compared to a flat membrane sensor, the nanopillar sensor’s accuracy wasn’t nearly as dependent on the angle of light.

A sensor would also need to prevent microbes and other cells from sticking. Implants can fail prematurely from infection or when the body encapsulates it with tissue. Several tests showed that proteins and cells were less likely to adhere to the nanopillar membrane than the flat membrane.

Next, the UCSF team tested the sensors in the eyes of rabbits. Compared to the flat membrane sensor, the nanopillar sensor enabled more consistent and accurate measurements at wider angles—even with a fidgety rabbit. In addition, after 30 days, about 59% of the flat sensor’s surface but only about 5% of the nanopillar sensor was covered by tissue.

“The sensor currently is less than a millimeter in size, with the goal of further miniaturization so it eventually can be implanted via a quick, simple procedure in the doctor’s office,” Sretavan says.