Researchers hope these results can be used to help predict treatment responses and better tailor treatments.AlexRaths/iStock/Thinkstock

Lymphoma is cancer that begins in a kind of white blood cell known as a lymphocyte, usually a B cell. There are many types of lymphoma, and they receive different kinds of treatment. The most common type is diffuse large B-cell lymphoma (DLBCL). Although DLBCL is usually a fast-growing cancer, some people can be treated successfully with chemotherapy and a monoclonal antibody. However, for unknown reasons everyone with DLBCL doesn’t respond to this treatment.

Several years ago, researchers defined two major subgroups of DLBCL. The groups arise from different B cells and have different patterns of gene activity. They also found that the likelihood that treatment would cure the disease varied by subgroup. About 40% of people with activated B-cell-like (ABC) DLBCL live for 5 years after treatment, while about 75% of people with germinal center B-cell-like (GCB) DLBCL live that long.

An international research team led by Dr. Louis M. Staudt at NIH’s National Cancer Institute (NCI) set out to find whether the tumor’s genetics could explain different treatment responses. The scientists analyzed DLBCL’s genetic features, divided tumors into subtypes, and compared treatment responses for the subtypes. The results were published on April 12, 2018, in the New England Journal of Medicine. 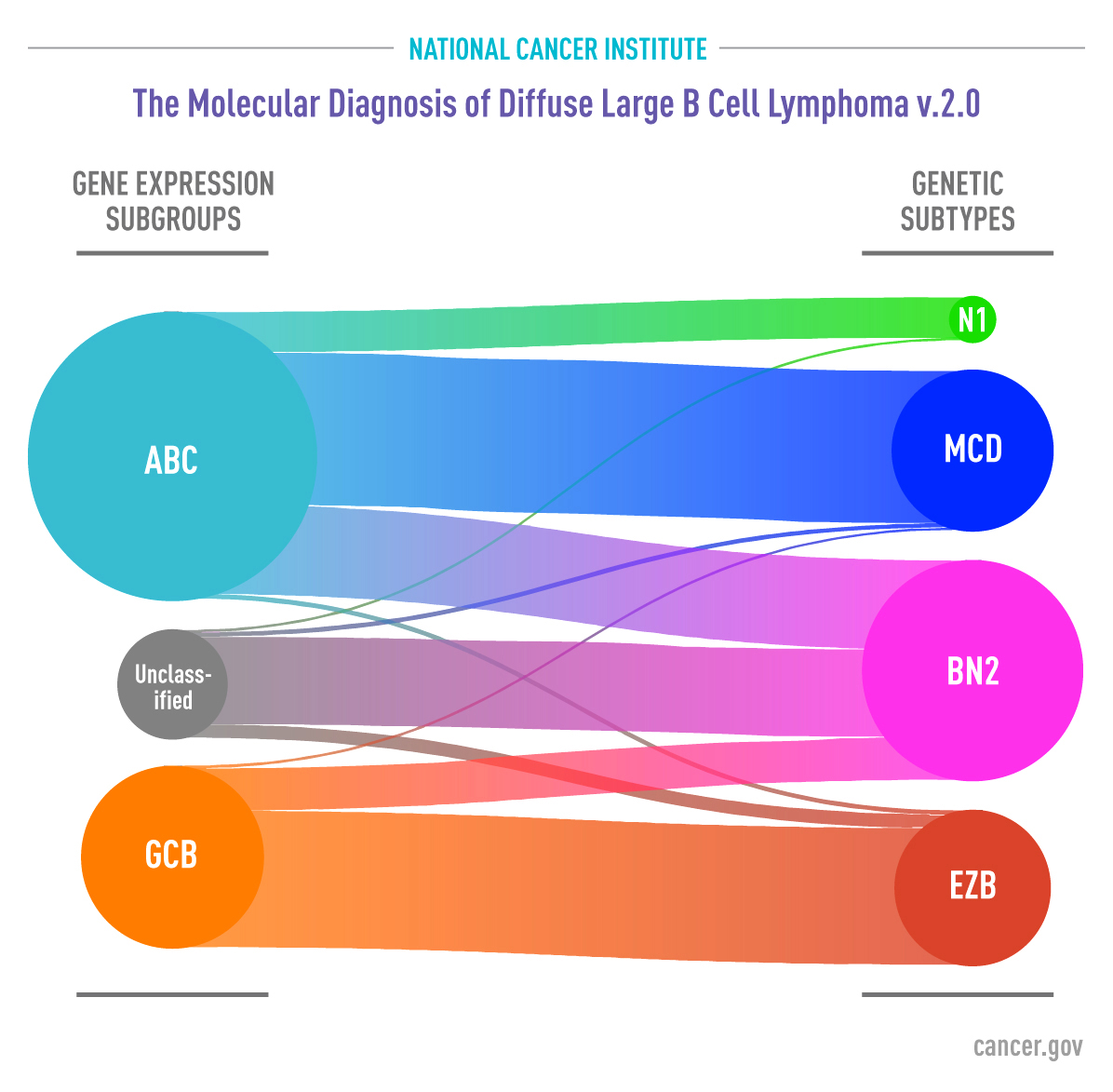 Subgroups of DLBCL were defined by gene expression several years ago (left). Genetic subtypes identified in the new study (right) each share a group of genetic aberrations. Curved connectors indicate relationships between the subgroups and subtypes. NCI

The research team analyzed genomic alterations and gene expression in tumor samples from 574 people with DLBCL. They identified four prominent subtypes that each share a group of genetic aberrations. People with two of the subtypes, called BN2 and EZB, respond well to treatment. People with the other two, called MCD and N1, don’t.

These genetic subtypes aren’t simply a refinement of the previously defined subgroups; some can be found in both the ABC and GCB subgroups. This refined genetic understanding of DLBCL can help doctors find the right treatments for their patients.

“Before, even with our most advanced molecular diagnosis, we would have said all ABC tumors are the ‘bad’ type and they need to be treated aggressively,” Staudt explains. “Now we can implement this kind of classification and say that even if a patient has the ‘bad’ ABC type, they have the ‘good’ genetic type, BN2. So there’s a much better chance of chemotherapy curing the disease.”