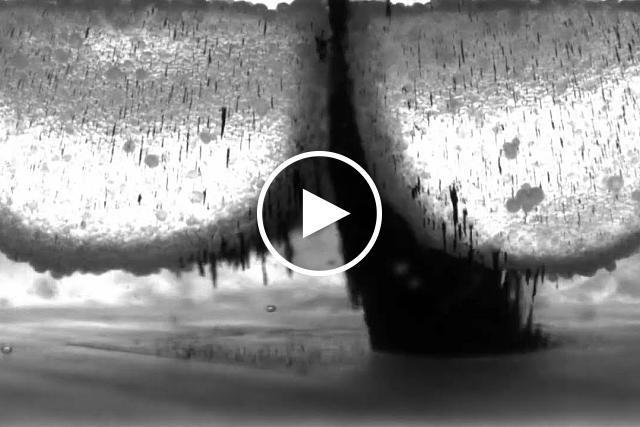 The technology of the toothbrush—essentially bristles on a stick—hasn’t changed much since the Babylonians and ancient Egyptians walked the earth more than 5,000 years ago. Tooth brushing helps rid the teeth of biofilms, also known as dental plaque. These sticky networks of bacteria cling to surfaces in the mouth and contribute to tooth decay and gum disease. But daily tooth brushing can be hard for people who lack fine motor skills due to age or disability.

An NIH-funded team led by Drs. Hyun (Michel) Koo and Edward Steager at the University of Pennsylvania aims to automate tooth cleaning with a swarm of microscopic “robots.” The scientists tested the robots on experimental teeth and showed that they could do the job of a toothbrush, dental floss, and oral rinse all in one. The results were published in the August 23, 2022, issue of ACS Nano.

The robots are made of tiny iron oxide particles, each roughly 100 times smaller than a grain of pollen. In a magnetic field, these nanoparticles cluster and form a series of bristle-like strands. By moving the magnetic field, the researchers can direct the bristles’ movements, adjust their stiffness, and shorten or lengthen them.

The researchers tested the system’s scrubbing powers on a 3D-printed model of human front teeth, real human front teeth mounted on artificial gums, and a section of a pig jaw containing gums and teeth. The teeth were put in a solution with the iron oxide particles. Electromagnets on the front and back of the teeth then formed and controlled the robotic structures.

The tiny “robots” composed of magnetic nanoparticles (grey spheres) can be used to break up dental plaque and kill and collect the microbes (cyan and green) within. Minjun Oh and Zhi Ren

As the structures were moved across the teeth, they adjusted to the different surfaces. They even scrubbed the nooks and crannies between teeth, transforming from bristle-like extensions into floss-like strings. The robots were gentle enough to leave pig gums undamaged but strong enough to break up biofilms. When the magnets were turned off, the structures dismantled, with the nanoparticles falling to the bottom of the chamber within two seconds.

Using iron oxide brings a particular advantage for oral hygiene. Iron oxide triggers chemical reactions that release microbe-killing molecules, essentially creating an antimicrobial rinse on-site. This allowed the tiny structures to kill the bacteria within biofilms and sweep up and collect leftover debris. The debris could then be analyzed to detect microbes and other signs of disease. This feature may one day be used to predict and diagnose diseases in the mouth and possibly elsewhere in the body.

In addition, the approach might be used to clean out biofilms inside catheters, surgical implants, and even water pipes. “When you see this kind of result that opens a whole new area and applications, it’s as exciting as it gets in research,” Steager says.

The technology will first need to be tested in clinical trials. The team plans to design an automated device that fits inside the mouth and is affordable for everyday use.