Cystic fibrosis (CF), a life-shortening genetic disorder, affects about 30,000 people nationwide. People with CF have a faulty protein that affects the glands that make mucus and sweat, causing problems in the lungs and other organs. Maintaining quality of life and extending life expectancy depends on early diagnosis.

One of the characteristic features of CF is excessive chloride in sweat. Measuring sweat chloride remains the gold standard for CF diagnosis. Typically, this involves collecting sweat in a device strapped to the wrist. The collected sweat is then transferred to a separate device for chloride measurement. But this approach often produces too little sweat to get a reliable measurement, particularly in infants.

To improve sweat collection and analysis for diagnosing CF, a team led by Dr. John Rogers at Northwestern University developed a wearable device that they dubbed a “sweat sticker.” The research was supported in part by NIH’s National Institute of General Medical Sciences (NIGMS) and National Institute on Aging (NIA). Results appeared on March 31, 2021 in Science Translational Medicine. 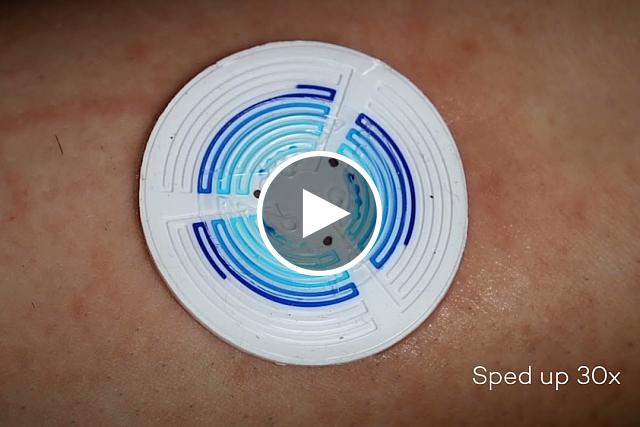 The sweat sticker adheres directly to the skin using an adhesive that’s safe for delicate newborn skin. It’s made from a silicone material that is flexible enough to conform to the contours of infants’ arms. The sticker is only about 1 millimeter thick but can hold up to 141 microliters of sweat in a series of narrow channels.

Collecting more sweat while providing equally reliable measurements was a major advance over the MSCS. But the researchers went further and developed a way to measure chloride concentrations in the sticker itself. They added a chemical into the sticker’s channels that reacts with chloride to produce a deep purple color. The more intense the color, the higher the chloride concentration. A digital camera could analyze the color change in the sticker in real time. Chloride measurements made in this way matched those made using a standard clinical instrument.

Adopting the sweat sticker for clinical use will require further testing in larger studies. But if adopted, it could open new possibilities for sweat testing. The improved sweat collection over the current clinical standard could make CF testing more reliable, particularly in infants. The color change can be read with a smartphone camera. This would allow at-home CF screening, thereby increasing access and reducing costs.

“By collecting and analyzing sweat at the point of collection, we can enable an earlier diagnosis,” says first author Dr. Tyler Ray, now at the University of Hawai’i at Manoa. “This is crucial for preventing severe complications and improving long-term patient outcomes.”

Similar systems are also being developed that use various sweat biomarkers to track other conditions, such as fatigue in aging.

Immune response to vaccination after COVID-19