Thirst circuitry mapped in the brain

A representative image from experiments in which scientists mapped the brain circuits that control fluid drinking. Oka lab, CalTech

It’s important for your body to have plenty of fluids each day. Water helps you digest your food, absorb nutrients, and then get rid of the unused waste. Your body fluids are adjusted by feelings of thirst or satiety after you drink.

For decades, scientists have known that a brain region called the lamina terminalis controls these urges to drink or not. Neurons within three parts of the lamina terminalis—the subfornical organ (SFO), the organum vasculosum lamina terminalis (OVLT), and the median preoptic nucleus (MnPO)—work together to coordinate drinking behaviors. But precisely how this circuitry works has remained unknown.

Previous studies led by Dr. Yuki Oka of the California Institute of Technology showed that activation of nitric oxide synthase (NOS)-expressing neurons in the SFO triggers mice to start drinking, even when they are fully water-satiated. In this study, the team more fully mapped the neuronal connections underlying drinking and satiety in the mouse brain. The research was supported in part by the NIH’s National Institute of Neurological Disorders and Stroke (NINDS). Results were published in Nature on March 8, 2018.

Although activation of NOS neurons in any of the three areas triggered drinking in mice, further experiments showed that the thirst impulse required the presence of NOS-expressing neurons in the MnPO. In mice where these neurons were virtually eliminated, drinking behaviors were no longer stimulated by activating NOS-expressing SFO neurons. Loss of these MnPO neurons also greatly reduced the chance that mice would start drinking after activation of OVLT neurons. These findings suggest that MnPO neurons are necessary for stimulating drinking behaviors. 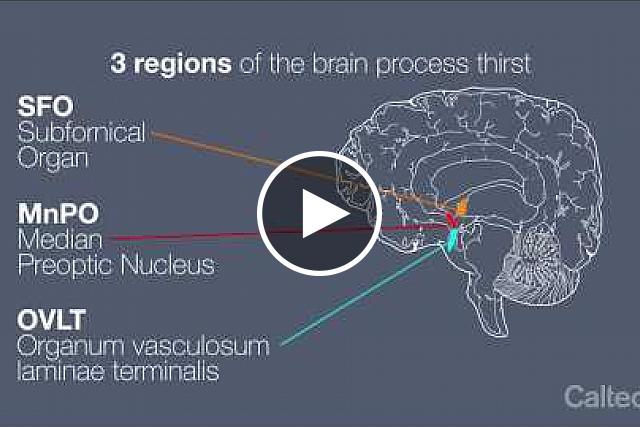 An animation of how the brain monitors dehydration, initiates drinking, and quenches thirst. Caltech

Further experiments suggested that GLP1R neurons regulate thirst satiety based on the act of drinking or gulping, rather than on the body’s absorption of water. For instance, the GLP1R neurons only fired when mice drank fluids (saline, sugar water, and oil), but not when they licked a dry water spout or ate a watery gel. The neurons fired at different rates depending on how often the animals licked, not on the total amount of water consumed. The authors speculate that water absorption is detected through other neurons in the gastrointestinal system.

“The inhibitory signals we discovered are only active during the drinking action,” Oka says. “However, the feeling of satiety indeed lasts much longer. This indicates that the MnPO inhibitory neurons cannot be the only source of thirst satiety. This will be the subject for future study."

Thirst circuitry mapped in the brain