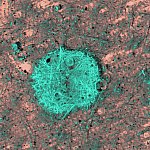 Scientists used a variant version of a protein called sLRP to soak up a toxic protein from the bloodstream and prevent its buildup in the brains of mice. The toxic protein, called amyloid-beta, forms dense deposits in the brain called plaques that have been linked to the symptoms of Alzheimer's disease. The NIH-funded researchers studied a strain of mice known to develop Alzheimer-like symptoms. Mice treated with the sLRP variant protein had improved learning and memory, and amyloid-beta plaques in their brains were reduced by about 90%. PubMed Abstract » 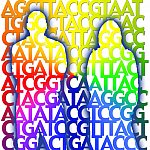 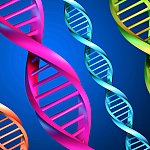 The first genome-wide association study of an infectious disease, conducted by an international group of researchers and funded in part by NIH, offered a new understanding of why some people can suppress virus levels following HIV infection. The scientists identified several genetic variants associated with the amount of virus, or viral load, in a patient's bloodstream. Other variants were linked to disease progression. The findings provide new avenues for developing vaccines and improved therapies to fight HIV infection. PubMed Abstract » 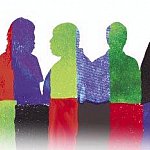 The International HapMap Consortium published analyses of its second-generation map of human genetic variation, which contains more than 3.1 million genetic variants—3 times the number reported in the initial HapMap of 2005. The new HapMap includes DNA data from 4 diverse populations, based in Nigeria, China, Japan and Utah in the United States. The improved HapMap will help researchers find DNA variants that influence the risk of disease and other traits. PubMed Abstract » 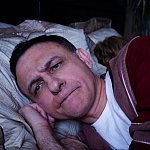 Experience tells us that sleepless nights can lead to overwrought emotions. Now NIH-funded scientists have a better understanding of why this occurs. Their imaging studies showed that lack of sleep can lead to greater activation of the brain's emotional centers and disrupt the brain circuits that tame emotional responses. The findings suggest that sleep restores the brain's emotional circuits and prepares people for the next day's challenges and social interactions. PubMed Abstract » 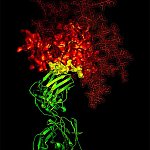 Scientists identified a tiny, unchanging region on an AIDS virus protein that may be the key to neutralizing the virus. A multi-site research team, including NIH scientists, used X-ray crystallography to take detailed 3-D snapshots of an antibody grabbing onto this stable viral region, which HIV uses to latch onto and infect T cells. The discovery of this potential viral weak spot could have a profound impact on the development of an AIDS vaccine. PubMed Abstract » 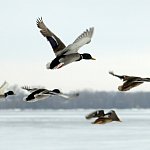 To foretell how the avian flu virus might one day jump from birds to humans, NIH scientists have been looking at the molecular shapes of viral molecules to see how they latch onto cells. They found that just 2 mutations to the viral H5 protein could change the shape in a binding region and make it easier for the avian H5N1 virus to latch onto human cells. These studies could help researchers prepare vaccines and therapies against deadly flu viruses before they mutate and begin to spread in the human population. PubMed Abstract » 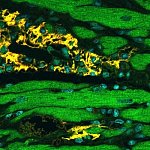 NIH-funded researchers developed a procedure for repairing damaged rat hearts by using cells generated in a dish from human embryonic stem cells. When the human-derived cells were implanted into the damaged hearts of rats, new heart muscle was incorporated into the heart tissue within a month. Further testing showed that the treatment thickened the heart's walls and improved their ability to contract. The accomplishment brings scientists a step closer to a treatment for people who have had heart attacks. PubMed Abstract »