Microtubules in a heart cell at rest (top) and compressed during contraction (bottom).Dr. Ben Prosser, University of Pennsylvania

The heart is an organ made of muscle cells. The normal adult human heart beats from 60 to 100 times per minute at rest. Each individual heart cell, known as a cardiomyocyte, contains contractile units called sarcomeres that power its beating. Cells contract, or shorten, in unison during each beat to pump blood through the heart and out through the body. In between the beats, the cells stretch back out as the heart fills with blood.

An organized network called the cytoskeleton helps cells maintain their shape and organization. Microtubules (MTs) are a major component of this cellular support structure. MTs can transmit mechanical signals and, like rods or struts, resist compression in contracting heart cells. How they perform these roles has been unclear.

A team led by Dr. Benjamin Prosser at the University of Pennsylvania set out to determine the role that MTs play in heart function. Their work was supported in part by NIH’s National Institute of Arthritis and Musculoskeletal and Skin Diseases (NIAMS), National Heart, Lung, and Blood Institute (NHLBI), and National Institute of Biomedical Imaging and Bioengineering (NIBIB). Results were published online on April 22, 2016, in Science. 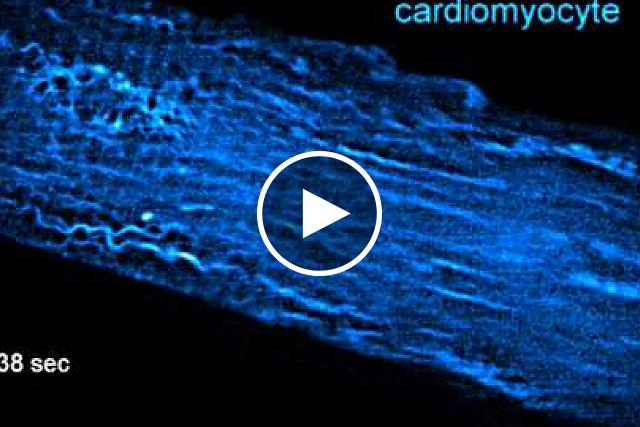 The group used an advanced imaging approach to observe fluorescently tagged MTs inside beating mouse and rat heart cells in real time. They noted that as the cells contracted, the MTs “buckled” under the force in a pattern that coincided with contraction of the sarcomeres. Like a spring, the MTs returned to their normal shape between beats.

The scientists found that MTs are linked to sarcomeres through a lattice-like structure. This connection could be altered by removing the amino acid tyrosine from MTs. With more tyrosine attached, the MTs appeared to slide rather than buckle. This allowed the force-generating machinery inside the cells to shorten further and faster. When tyrosine was removed from MTs by a natural process called detyrosination, the MTs formed tighter, stiffer connections with the sarcomeres and restricted contraction.

To determine if this change might be associated with impaired heart function in humans, the team analyzed tissue from healthy donors and patients with heart disease. They found a correlation between lower MT tyrosine levels and decreased heart function.

“Essentially we found that excess detyrosination promotes the interaction between microtubules and the sarcomere, increasing resistance to contraction, and so may contribute to reductions in cardiac function in certain disease states,” Prosser explains.

The team plans to study whether genetic alterations or drugs that decrease MT detyrosination can improve the function of diseased heart muscles.