In the diagnosis of disease, doctors often need to take tissue samples and process them for examination under a microscope. Millions of such biopsies are performed in the U.S. every year. But these pose many challenges. Biopsies may damage healthy tissue. Conventional histology techniques used to examine the samples can require extensive processing and take days.

Medical imaging could get around these problems. But while researchers have made progress in medical imaging, current techniques have limitations. Many use dyes that can be costly and have side effects. Some 3D imaging techniques rely on costly or high-power lasers that can limit their clinical uses. And most current approaches can’t tolerate motion or give results in real time.

A research team led by Dr. Elizabeth Hillman at Columbia University has been developing an imaging system called swept confocally aligned planar excitation microscopy, or SCAPE. SCAPE uses laser light at levels already FDA-approved for medical systems. It sweeps a laser across tissue, which causes certain molecules in the tissues to emit light. This light is collected by a lens and focused on a highly sensitive sensor, which the system uses to form 3D images.

The team previously demonstrated SCAPE’s ability to rapidly image living tissues. In their new study, they tested a version of the microscope, called MediSCAPE, for use in clinical settings. They created two prototypes: a benchtop version and a compact system for use in an operating room.

The researchers found that both MediSCAPE prototypes could capture images from a variety of tissue samples. When compared with conventional histology techniques, MediSCAPE images revealed similar detail quickly, without adding any dyes. These results showed that MediSCAPE could be used for the rapid, 3D evaluation of tissues within the living human body instead of requiring biopsies and lengthy processing.

The team then demonstrated that MediSCAPE could be used in living mice to reveal 3D structures in the brain, kidney, and a beating heart. It was also used to spot pancreatic disease. How deep the system could see depended on how far the laser light could penetrate different tissues. 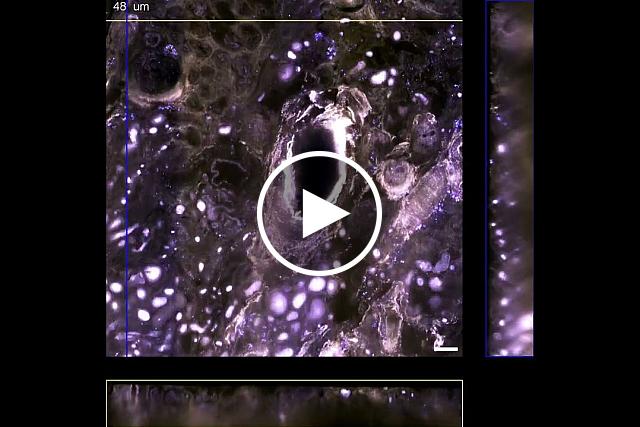 The team used MediSCAPE  to examine fresh tissue specimens from patients with chronic kidney disease. MediSCAPE revealed important features in the tissue, such as a clogged artery and a renal cyst.

To show that MediSCAPE works in living people, the team imaged the tongue and inner and outer lips in a healthy adult. MediSCAPE revealed the layers of oral tissues and differences between them.

In addition, MediSCAPE was able to show when blood flow was cut off and restored in the kidney of a mouse. During transplantation and other surgeries, tissue can be damaged and die when blood flow is cut off for too long.

“Understanding whether tissues are staying healthy and getting good blood supply during surgical procedures is really important,” Hillman explains.

The study shows how MediSCAPE might be used in various clinical settings to detect disease, guide surgeries, and screen organs before transplantation. The team is now working to further shrink and improve the system and test its performance in a larger number of patients.