Uveitis symptoms can vary. Anyone suffering eye pain, severe light sensitivity, or any change in vision should immediately get an eye exam. IPGGutenbergUKLtd / iStock / Getty Images Plus

Uveitis is an eye disease responsible for up to 1 of every 6 blindness cases in the U.S. It’s caused by inflammation of the eye’s middle layer of tissue called the uvea. Early signs of uveitis include eye pain, redness, sensitivity to light, blurry vision, and floaters (seeing specks or shadows).

Uveitis can be caused by a misguided attack from the body’s own immune system. It can also result from infections or tumors, bruises to the eye, or toxins.

Noninfectious uveitis is often first treated with oral corticosteroids like prednisone to control inflammation. But being on high doses for a long time can have serious side effects, so patients are soon reduced to a low dose and switched to other drugs. Methotrexate and mycophenolate mofetil are commonly used medications. They work by suppressing the immune system.

A research team led by Dr. Nisha Acharya of the University of California, San Francisco, set out to determine which of these uveitis drugs was more effective when moving beyond corticosteroid treatment. The international study was funded by NIH’s National Eye Institute. Results were published on September 10, 2019, in JAMA.

The team randomly assigned 216 patients with uveitis to receive methotrexate or mycophenolate. The patients had intermediate and posterior uveitis, which affects the middle and back of the uvea, or panuveitis, which affects all layers. Over six months, the participants reduced their prednisone to 7.5 milligrams a day or less and received either three grams of mycophenolate daily or 25 milligrams of methotrexate weekly.

To assess the treatments, the researchers performed eye exams and imaged the front and back parts of the eye. At six months, both medications were similarly effective: 67% of participants in the methotrexate group and 57% in the mycophenolate group had control of their inflammation and successfully reduced corticosteroids. 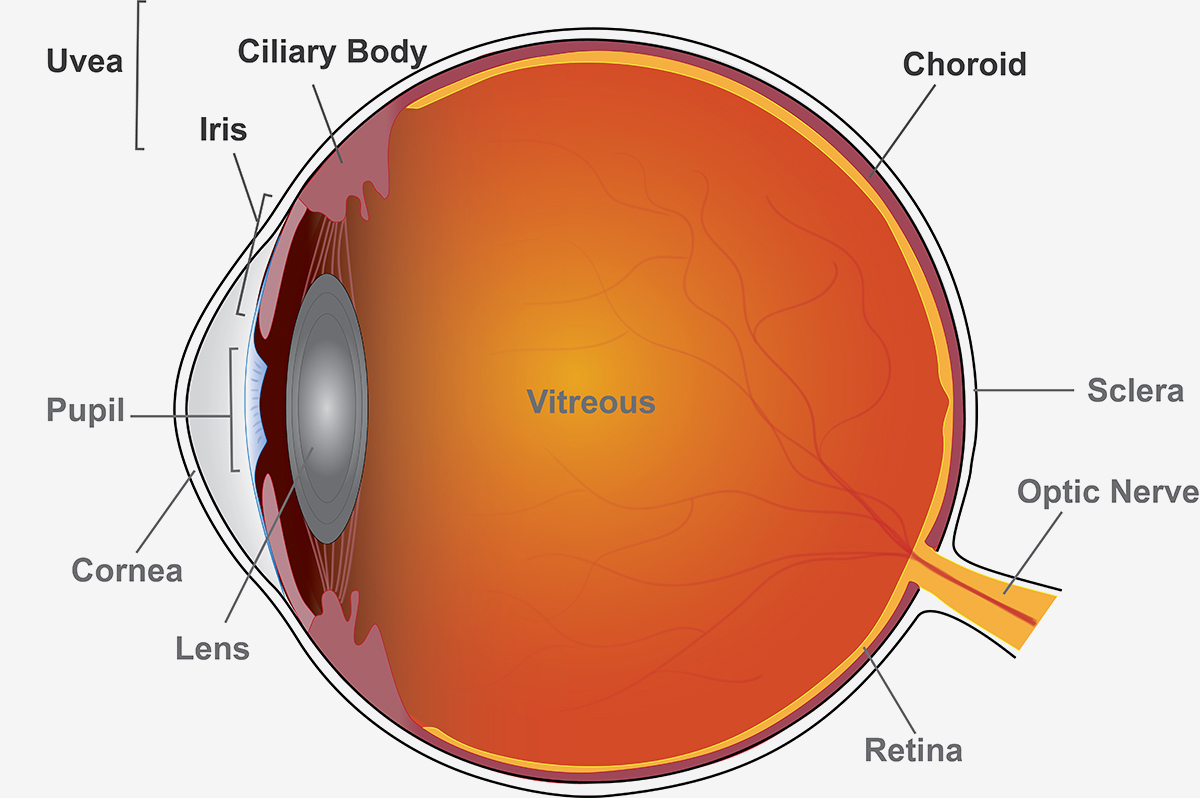 Uveitis is inflammation of the eye originating in the uvea, which includes the iris, ciliary body, and the choroid. Lesley Earl, NEI

Notably, the researchers found that methotrexate was more effective than mycophenolate for treating the most severe forms of uveitis—posterior uveitis and panuveitis. At six months, 74% in the methotrexate group had control over their disease versus 55% in the mycophenolate group. Among patients with intermediate uveitis, the difference between groups wasn’t significant.

Patients in the study tolerated both drugs equally well. Both can cause fatigue, nausea, and headaches. Serious side effects, related to liver function, were rare.

“Based on this head-to-head clinical trial, methotrexate is as good as or better than mycophenolate for treating uveitis. That’s important because the prior literature and a survey on treatment preferences suggests most clinicians believe the opposite. Now we have a randomized trial to provide guidance on treatment,” Acharya says. “Additionally, there’s a cost difference in the U.S., where mycophenolate to control uveitis is over five times more expensive.”