Ultrasound imaging gets small and wearable

Ultrasound is a noninvasive technique that lets clinicians peer inside the body to monitor health or diagnose disease. Imaging sessions are generally brief because ultrasound often requires the expertise of trained technicians working in medical settings.

Several research groups have been seeking more versatile approaches that would allow longer-term ultrasound monitoring in a variety of settings via wearable devices. To date, most of these efforts have provided relatively low-resolution images or are unable to visualize deep tissues or organs.

Now, an NIH-funded research team led by Dr. Xuanhe Zhao at the Massachusetts Institute of Technology has developed a new type of wearable ultrasound patch that overcomes many of the limitations of earlier approaches. This multi-layered device is about the size of a thick postage stamp, and it adheres to skin in both wet and dry environments. The device was described in Science on July 29, 2022.

Ultrasound works by first placing a probe, or transducer, on the body. The transducer emits high-frequency sound waves that enter the body and bounce off internal tissues, creating echoes that are captured and transmitted to instruments that translate the data into pictures or videos. A soft gel applied between the skin and probe helps to enhance soundwave transmission.

The patch created by Zhao’s team used several advanced techniques to combine all of these ultrasound components in a miniature package. A thin, rigid array of ultrasound probes sits atop a tough but flexible hydrogel layer. An elastomer membrane protects the hydrogel from drying out, and a bioadhesive binds the probe strongly to skin. The combination of a rigid probe array and flexible hydrogel-elastomer layers enables more stable and higher-resolution imaging than other wearable ultrasound devices that are thin and stretchy. 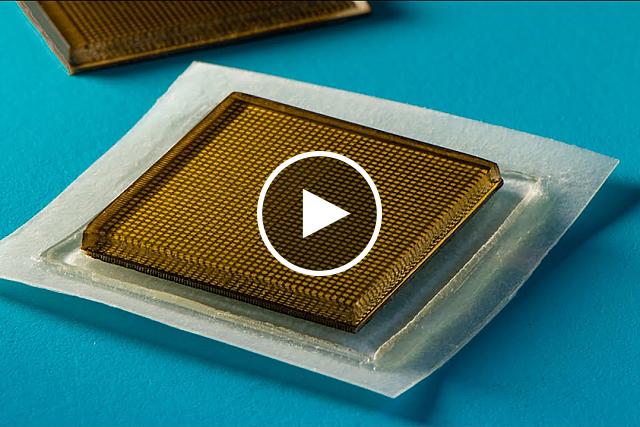 The researchers tested the patch on 15 human volunteers. They showed that the device could be comfortably worn for at least 48 hours. Depending on placement, the patch could provide continuous imaging of blood vessels, heart, muscle, diaphragm, stomach, or lung. The heart or lungs could be stably and continuously imaged even while volunteers were jogging or cycling.

Despite the patch’s potential for on-the-fly mobile imaging, the device currently must be hooked to computer systems for intensive data processing. But Zhao and his team foresee future possibilities:

“We envision a few patches adhered to different locations on the body, and the patches would communicate with your cellphone, where AI algorithms would analyze the images on demand,” Zhao says. “We believe this represents a breakthrough in wearable devices and medical imaging.”

Ultrasound imaging gets small and wearable

Fighting current and future coronaviruses with a single vaccine

Restoring cell and organ function after the heart stops