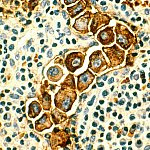 When breast cancer has spread to nearby lymph nodes, many doctors believe that removing several more nodes provides better treatment. But an NIH-funded study found no difference in survival rates 5 years after surgery, whether patients had had about 2 or more than 10 lymph nodes removed. The finding may change the way early-stage breast cancer is treated in some patients. Pubmed Abstract » 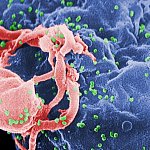 Treating HIV-positive patients with anti-retroviral therapy early—before their T-cell counts start to drop—can significantly lower the risk of transmitting HIV. In a large NIH-funded clinical trial, researchers selected over 1,700 couples from around the world in which one partner was HIV-positive. Half the HIV-positive patients started anti-retroviral therapy immediately, while the other half received standard clinical treatment. Early therapy reduced the rate of HIV transmission by 96%. Pubmed Abstract » 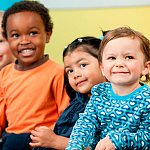 Recurrent wheezing in children at risk for developing asthma can be controlled using far less medication by giving higher doses of an inhaled corticosteroid only as needed instead of lower doses every day. In an NIH-funded study, researchers found no significant differences in symptoms or number of doctor visits, but the children who took medication intermittently received one-third the total medication of those on a daily regimen. Pubmed Abstract » 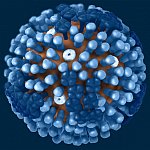 Avian flu-fighting antibodies rose significantly in adults who received a DNA “primer” vaccine followed by an avian flu shot. In an NIH study, people given the primer, followed 6 months later with an inactivated H5N1 vaccine, had 4 times the amount of antibody of those who received 2 vaccine doses. The technique holds promise for blocking several strains of influenza. Pubmed Abstract » 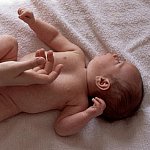 A saliva sample from a newborn can be used to quickly and effectively detect cytomegalovirus (CMV) infection, a major cause of hearing loss in children. NIH-funded researchers, using a common technique called polymerase chain reaction, found CMV in liquid saliva samples in 100% of cases identified by the current standard. Better screening might lead to earlier treatment for affected babies. Pubmed Abstract » 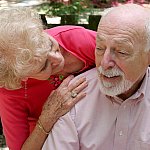 A small NIH-funded clinical trial found that daily doses of an insulin nasal spray can slow memory loss and preserve thinking skills in people with mild to moderate Alzheimer's disease. Patients given either a 20 IU (international units) or 40 IU dose of insulin directly to the nose showed improvement in general function, and those given the lower dose also showed improved memory. Pubmed Abstract » 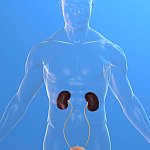 About 1 in 3 candidates for kidney transplantation has a condition that causes their bodies to immediately reject transplanted organs. In an NIH-funded study, transplant patients underwent several rounds of plasmapheresis, a process that removes transplant-reactive antibodies from the blood, and received an “incompatible” organ. The patients had an 80% survival rate after 8 years, significantly higher than those who waited for a compatible transplant. The technique could lead to thousands more kidney transplants every year. Pubmed Abstract » 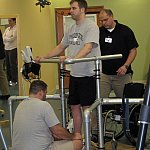 Specialized physical therapy and electrical stimulation to the spine enabled a man with a spinal cord injury to stand and move paralyzed muscles. After 2 years of physical therapy alone, doctors supported by NIH implanted electrodes in the paralyzed man's spinal cord. With electrical stimulation from the electrodes, the patient now has control of previously paralyzed muscles below the site of injury. Pubmed Abstract »