Illustration of a “mosaic nanoparticle vaccine,” which contains proteins from many different flu strains. UW Medicine Institute for Protein Design

The flu virus changes, or mutates, quickly. Researchers try to predict which flu strains will be the most prevalent each year. These predictions are then used to develop that season’s flu vaccine. If the predictions aren’t correct, the resulting vaccine will be less effective. As a result, seasonal flu vaccines vary in their effectiveness, from as high as 60% to as low as 10%. A single vaccine that conferred protection against a wide variety of strains would provide a major boost to global health.

A research team led by Drs. Barney Graham and Masaru Kanekiyo at the Vaccine Research Center of NIH’s National Institute of Allergy and Infectious Disease (NIAID) and Neil King at UW Medicine have been working to develop such a vaccine. The study was also supported in part by NIH’s National Institute of General Medical Sciences (NIGMS). Results appeared on March 24, 2021, in Nature.

Flu vaccines use a viral protein called hemagglutinin (HA). To create their vaccine, the researchers fused HA proteins to protein building blocks that assemble into nanometer-sized particles (nanoparticles). The resulting nanoparticles display the HA proteins for the immune system to react to.

The team made four types of nanoparticles, each using HA from a different flu strain. They also made “mosaic” nanoparticles that incorporated all four HAs on each nanoparticle. 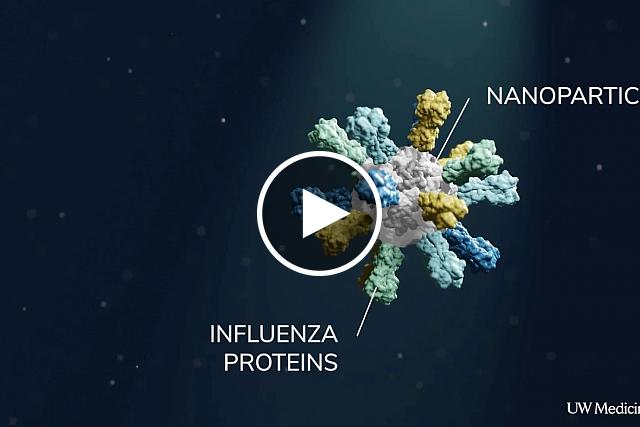 The researchers tested their vaccines in mice, ferrets, and monkeys. They compared them to a commercial flu vaccine from 2017-2018 that used the same four flu strains. The nanoparticle vaccines elicited antibody responses against these strains that were as good or better than those elicited by the commercial vaccine. But the nanoparticle vaccines also provided near-complete protection against flu strains that the commercial vaccine did not protect against.

The nanoparticle vaccines included only two of the 18 influenza A virus HA subtypes, H1 and H3. But a cocktail vaccine of the four HA nanoparticles conferred 73% protection against viruses containing H5 and H7 subtypes, and the mosaic vaccine conferred 92% protection. In contrast, the commercial vaccine provided only 12% protection. H5 and H7 appear in avian flu strains that are recognized pandemic threats.

To determine how the mosaic nanoparticle vaccine protects against such a broad range of viral strains, the researchers examined the interactions between HA and vaccine-elicited antibodies using electron microscopy. Antibodies that recognized H1 viruses did so primarily via the HA receptor-binding domain (RBD). But antibodies that recognized H5 did so via the stem region of HA, which doesn’t change much across the HA subtypes.

This ability to elicit antibodies against both the RBD and the stem region makes the mosaic nanoparticle vaccine an attractive candidate for further study. Such a vaccine could provide protection against many more strains than current seasonal vaccines. The protection might also last beyond one season, which would reduce the need for repeated seasonal vaccinations. NIAID’s Vaccine Research Center is already planning a phase I clinical trial for a version of the nanoparticle vaccine.

“The responses that our vaccine gives against strain-matched viruses are really strong, and the additional coverage we saw against mismatched strains could lower the risk of a bad flu season,” says Dr. Daniel Ellis of the University of Washington, a lead author of the study.