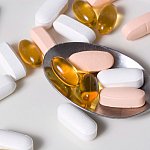 Two large NIH-funded clinical trials found that taking vitamin E, vitamin C or selenium does not reduce the risk of prostate cancer or other cancers in older men, as some previous studies had suggested. The results highlight the fact that dietary supplements can sometimes seem beneficial in small observational studies, but large, carefully controlled trials are needed to test whether they really live up to their hoped-for benefits.
PubMed Abstract: Effect of selenium and vitamin E on risk of prostate cancer and other cancers: the Selenium and Vitamin E Cancer Prevention Trial (SELECT) »
PubMed Abstract: Vitamins E and C in the prevention of prostate and total cancer in men: the Physicians' Health Study II randomized controlled trial » 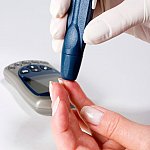 People with type 2 diabetes need to keep their blood sugar from getting too high. But a large NIH-funded clinical trial found that tighter control isn't always better. A therapeutic strategy designed to aggressively control blood sugar in adults with diabetes who are also at high risk for cardiovascular disease not only failed to reduce the risk of major cardiovascular events; it actually raised patients' risk of death. Pubmed Abstract » 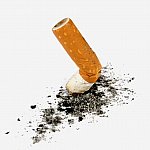 Smokers Band Together and Quit Together

Spouses, friends, siblings and co-workers usually decide to light up or stub out their cigarettes for good around the same time, an NIH-funded study found. Married couples seemed to exert the greatest influence on each other. When one spouse quit smoking, the other’s likelihood of smoking dropped by nearly 70%. A better understanding of how social ties affect smoking behavior may lead to more effective ways to prevent or reduce smoking. Pubmed Abstract » 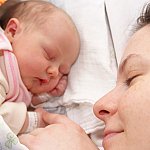 Preterm infants born to mothers receiving intravenous magnesium sulfate-a common treatment to delay labor-are less likely to develop cerebral palsy than those whose mothers don't receive it, according to NIH-supported research. The study, involving more than 2,200 pregnant women, is the largest, most comprehensive effort to date to examine the link between the often-used drug and cerebral palsy. Pubmed Abstract » 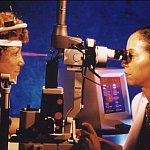 Traditional laser therapy proved more effective than newer steroid injections for treating people with diabetes who have abnormal swelling in the eye, a condition called diabetic macular edema. About 700 patients were studied in the NIH-funded clinical trial, which showed that laser therapy protected against vision loss and had far fewer side effects than the corticosteroid treatments. Pubmed Abstract » 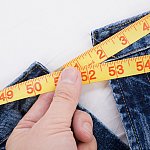 Even if your weight is in the normal range, your risk of death increases if your waist is wide, according to research by NIH scientists. The investigators studied nearly a quarter-million people over age 50. Those with the largest waists had about a 25% higher mortality risk than those with a normal-sized waist. Normal-weight people with large waists had a 20% higher risk of death than those with both a normal weight and waist size. Pubmed Abstract » 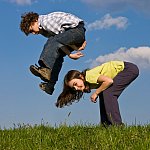 Physical activity levels sharply declined in a large group of American children between the ages of 9 and 15, according to a long-term study by NIH-supported scientists. At ages 9 and 11, more than 90% of the children met recommended activity levels—at least 60 minutes of physical activities most days of the week. By age of 15, however, only 31% met the recommended level on weekdays, and only 17% on weekends. Pubmed Abstract » 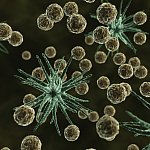 A little housecleaning may help to reduce asthma symptoms in people who have both asthma and allergies, suggests a study by NIH scientists and their colleagues. A survey of more than 2,500 people showed that allergy-triggering substances, called allergens, were common in most homes. Households with asthmatic people were more likely to have higher levels of multiple allergens, including those from dog, cat, mouse and dust mite. Pubmed Abstract »