With NIH support, scientists across the United States and around the world conduct wide-ranging research to discover ways to enhance health, lengthen life, and reduce illness and disability. Groundbreaking NIH-funded research often receives top scientific honors. In 2020, these honors included one of NIH’s own scientists and another NIH-supported scientist who received Nobel Prizes. Here’s just a small sample of the NIH-supported research accomplishments in 2020. 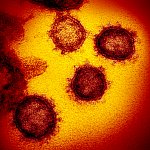 The first reports of an unknown, sometimes fatal respiratory infection emerged from Wuhan, China in late 2019. NIH researchers quickly moved to understand the source of that infection, a novel coronavirus called SARS-CoV-2. By February, they produced a detailed picture of the virus spike protein, which allows the virus to infect human cells. This helped to identify targets for potential vaccines and treatments. Further work gave detail into how the virus enters and exits cells, which may help guide new approaches to combatting infections and stopping transmission. A genomic analysis helped explain why SARS-CoV-2 is more deadly than many other coronaviruses. Immune system studies showed how existing immune cells may help account for the wide range of symptoms among the infected and shed light on the antibody levels and immune cells needed to protect against SARS-CoV-2. 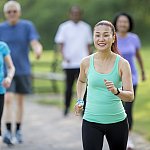 Physical activity can play an important role in maintaining cognitive health, but it hasn’t been clear why. Researchers identified an exercise-induced protein that generated new brain cells and improved memory in mice. The protein was also found in higher levels in the blood and plasma of older adults who were active. The findings suggest new approaches to combat age-related cognitive decline. 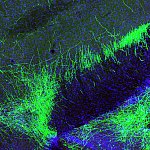 More than 50 million Americans suffer from chronic pain, and many are prescribed opioid medications as treatment. Researchers are searching for more effective treatments for chronic pain. A study identified a group of neurons in mice that blunt pain by dampening the activity of multiple pain-processing regions of the brain. The neurons could be promising targets for new non-addictive therapies for chronic pain. 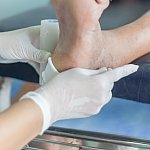 Diabetes can impair the skin’s ability to heal itself. Even small cuts on the feet can develop into diabetic foot ulcers—chronic, non-healing wounds that are vulnerable to infection. These ulcers are a major cause of lower limb amputations, disability, and death in people with diabetes. Researchers found that diabetic foot ulcers don’t recruit the immune cells needed for normal wound healing. Understanding this impaired immune response could lead to better therapies. 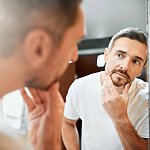 A study confirmed that stress can turn hair prematurely gray—and discovered how. Scientists found that stress affects the stem cells responsible for regenerating hair pigment. Chemicals involved in the body’s fight-or-flight response cause permanent loss of these stem cells so that new hair appears gray or white. The findings give insights for future research into how stress affects stem cells and tissue regeneration. 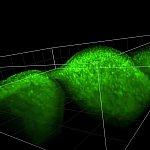 The nose contains millions of specialized neurons that allow it to smell different odors. Simple odors activate a particular combination of neurons that send a coded message to the brain. Researchers used an advanced 3D imaging technique in mice to reveal how receptors in the nose help decode the smell of complex odor mixtures. The findings shed light on how the brain perceives odors and may help reveal why some diseases cause a loss of smell. 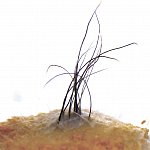 Scientists have been able to grow human skin outside the body for over 40 years. However, skin grown in cultures lacked the embedded structures, like hair follicles and sweat glands, found in real skin. Researchers were able to create hair-growing skin from human stem cells and graft it to mice. The lab-grown skin could aid in the study of skin diseases and skin reconstruction after burns and wounds. 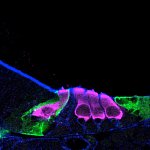 Hearing involves thousands of tiny hair cells inside the cochlea, a snail-shaped organ in the inner ear. In humans, hair cells can’t regenerate when they’re damaged. Loud sounds, disease, injury, and aging can all damage hair cells and result in permanent hearing loss. Scientists mapped how these sensory cells develop in the mouse cochlea. Understanding cochlear development could help researchers working on therapies for several forms of hearing loss.